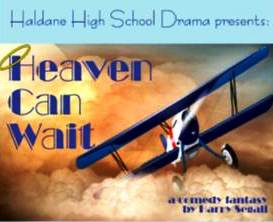 Will be performed next Friday and Saturday evening

For Haldane senior Jack Quigley, you could say that life parallels art at the moment.  Quigley has the lead in the Haldane High School drama production of Heaven Can Wait, the play that inspired the 40s movie Here Comes Mr. Jordan and its remake, the 70s Warren Beatty film Heaven Can Wait. As Joe Pendleton, a boxer who is prematurely summoned to the pearly gates through a rare error by his appointed ‘angel,’ Mr. Jordan, he has to assume another identity, quickly, as his soul gets transferred into another man’s body. Quigley in turn, has had to do something similar in quickly transforming himself into Joe, very much a young man of the 40s, replete with snappy dialogue and an attitude from that era. It’s only Quigley’s second dramatic role, but he’s rising to the challenge, even if it did mean giving up some of his Thanksgiving break for extra, down-to-the-wire rehearsal time with the play’s director, Martha Mechalakos. Quigley called his first lead “exciting, but equally stressful, as I have a lot of lines.” Mechalakos noted that it’s not just memorizing great chunks of material, but more difficult because “part of it is very conversational, with hemming and hawing and very different, idiomatic, language.” It’s all made slightly easier for Quigley because he’s “only ever played a character from this era.” That would be last year’s play The Man Who Came to Dinner from the same time period.  The trick to it all is to keep it “very straightforward,” says Mechalakos. 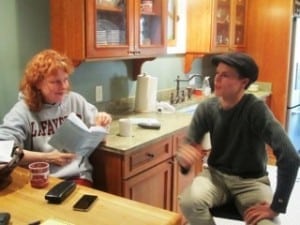 Director Mechalakos works with some of the leads, including Jack Quigley

The hunt for just the right play to choose for the fall production is always difficult for Mechalakos.  She starts the quest over the summer, using the sites from the main play publishers, Dramatists Play Service and Samuel French.  There she can put in criteria, for example size of cast or appropriate for high school (“the raciest plays in all the land,” suggests Quigley….), and then reads a synopsis of those which seem most promising.  She then orders “perusal copies” of some of the candidates and reads them with an eye towards plays she can cast with as many students as possible, with a nod towards hopefully (but not always) giving some of the larger roles to deserving upperclassmen.  But it doesn’t always pan out, “sometimes I can accommodate everyone, but sometimes not exactly,” says Mechalakos.  Other factors taken into consideration include limitations of space, sets and costumes in a small school with a commensurately restricted budget such as Haldane.

The fall play often sees a smaller number of freshman and sophomores involved, simply because they often are cast in roles with little dialogue. As there is a large time commitment involved in the rehearsal process, regardless of role size, sometimes the younger students, many of whom had leads as eighth-graders in the middle school production, get discouraged. In the spring musical they can participate in all of the ensemble numbers, so more sign on. It’s all cyclical, and quickly they become juniors and seniors and their chances for a larger roles increase again. Luckily for the students, Haldane’s size lends itself to better chances for good parts for all students simply because the audition pool isn’t huge (although it is growing, as the plays and musicals gain in popularity as school activities). Mechalakos has heard of schools where 200 kids audition for musicals. At Haldane she feels that both she and the students are lucky to be able to work with each other over a period of years, and that being cast more frequently gives an assist to the students when they move on to college and can put their experience to good use. She cites a senior from last year, Peter Spratt, who recently was cast in the dance ensemble for a production at Marist, as an example. 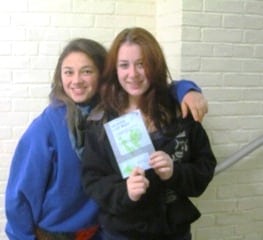 Funding for the productions is largely self-generated with ticket sales, program ads and concession sales covering much of the drama department’s costs for sets, costumes, props and advertising. The school pays for scripts, royalties and licensing. The theatre department, along with others who use the small gym/auditorium, was also a beneficiary of a large grant submitted a few years ago to the Haldane School Foundation. Funding this year will go towards augmenting the wireless system, providing the actors with 11 microphones to use, which will eliminate the imbalance seen, with a few actors audible, but many inaudible, in previous productions. Funding for a new sound and light board is part of the Master Plan, which District Superintendent Mark Villanti has drawn up.

Now that the rehearsals are in full swing, Mechalakos is happy with the choice she made in Heaven Can Wait, calling it “a lot of fun — it’s a very charming show.  It’s also bittersweet and might provoke a tear or two — it has for me, every time; there’s some sadness in it.  But let’s see, what else has it got?” Quigley jumps in, “Romance, villainy, murder, a saxophone, horse racing.”

The plot, in a nutshell, is this: Joe Pendleton, a professional boxer and pilot mistakenly has his soul pulled from his body before he has died. In heaven, Mr. Jordan, the chief angel, is forced to find him a new body. He ends up transferred into the body of a wealthy man who was recently murdered by his wife. Joe, in the form of the rich man, now no longer murdered, falls for a girl, while dodging his “wife’s” villainy. He is also reunited with his manager, Max. All the while Mr. Jordan has to find Joe yet another new body, a more suitable one … but then what about the girl?

The show is suitable for all ages, though very young children might get a bit squirmy, and there is some mock smoking in the show, by adult characters portrayed by highschoolers.

Oh, and here’s a scoop — though not such a big scoop that it hasn’t been rumored for months by the Haldane theater crowd — the spring musical has now been 100 percent confirmed: more slang and patter, along with hat check girls and high-roller guys, and characters with names like Nicely Nicely and Miss Adelaide, awaits in Guys and Dolls.

One thought on “'Heaven Can Wait', a bittersweet comedy, is Haldane’s Fall Production”