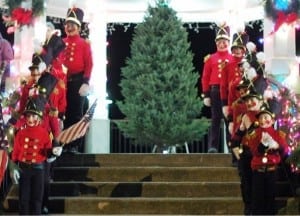 A village tradition starts off the holiday season

A venerable Cold Spring Village annual tradition, the tree lighting at the bandstand on the riverfront, continued Friday night (Dec.2) as village officials, Cold Spring Fire Company volunteers, supportive merchants and dancers from the Hudson Valley Dance Studio joined forces to kickoff the Christmas holiday season. A throng of youngsters, accompanied by parents and grandparents, shouted, laughed, squealed and shed a tear or two as they eagerly embraced the anticipation and joyousness brought on by the lights, music, the March of the Wooden Soldiers and ultimately the grand arrival of Santa Claus aboard a fire company vehicle.

Lights and sirens accompanied the great and wonderful Claus as he sat atop a fire company vehicle waving to his adoring fans of all ages. And, as befits a celebrity who hasn’t lost a watt of star power, excited children and their anxious camera-toting companions mobbed Santa as he alighted from the truck.  Eventually Santa made his way to the grandstand where children could have a more orderly visit and proper photos could be taken.

Sponsored by the Cold Spring Village Trustees who also supplied cider and cookies, the event also featured hot chocolate from Go-Go Pops and the Hudson House and candy canes from Pete’s Hometown Deli.  The only thing missing, although no laments were heard, was an atmospheric snowfall.