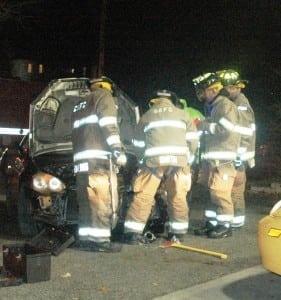 A sheriff’s officer and member of the Cold Spring police force said that no one was injured, adding that they were not authorized to provide details on the vehicles’ drivers or whether other occupants were in the cars along with the drivers. A few somber-faced young people, who seemed to be in their teens or early 20s, waited on the sidelines or spoke with law enforcement officers gathering information. 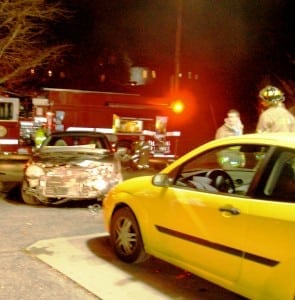 A Honda, its front smashed, stands at the Sunoco gasoline station at the corner. Photo by M.J. Armstrong

Occurring at about 8:45 p.m. on a cold, dark but clear night, the collision left pieces of the vehicles strewn about Morris Avenue. At the edge of the Sunoco gasoline station lot on the northwest corner, a gray-toned Honda sedan seemed to sag, its front end crumpled and smashed. Cold Spring firefighters worked to get the hood open and, as one explained, disconnect the battery. Looking mostly intact, a black Jeep Liberty Sport remained in Morris Avenue just past the center of the intersection, its door open and debris visible underneath.
Photos by L.S.Armstrong, except as noted.