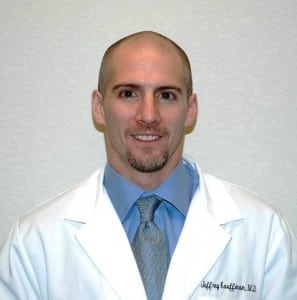 Sports teams at Haldane have some top-notch professional expertise on the sidelines these days. It may not result in more wins — but it will help keep players safer and ensure that injuries are dealt with to a very high standard. Dr. Jeff Kauffman is a Cold Spring resident and a specialist in sports medicine. This season he volunteered to be on hand at all of the Blue Devils’ home football games as well as both playoff games in Mahopac. While the season saw relatively few injuries, Kauffman did deal with shoulder separations, injured knee caps, concussions and an assortment of lesser bumps, bruises and muscle strains. He is now developing programs which will benefit Haldane athletes. “I’m a big sports fan — I just really enjoy watching games and working with athletes and kids. Volunteering is a way to get involved and to give something back to the community,” Kauffman said. “And it’s also a chance to let people know who I am and that I’ve treated a lot of athletes.”

Kauffman’s “day job” is with Orthopedic Associates of Dutchess County (OADC) where he works in their Fishkill office. OADC covers 15 school districts and as a public service provides a certified athletic trainer to each once or twice a week. Nadine Brooks fills that role at the Haldane Central School District, helping student athletes with aches and pains and muscle pulls. When she feels there is a need for specialized care she can call upon Kauffman. “I have a policy in my office that when an athlete is injured, I’ll see them within 24 hours,” he said.

Concussion — a sports injury that has received increased media attention in recent years — is of particular interest to Kauffman.  He received specialized training in the treatment of concussions at the University of Pittsburgh and said that OADC “is really at the forefront of dealing with concussions. We’ll have a program set up [at Haldane] next year.” Kauffman said that while in the past doctors often treated concussions using a “best guess,” that is no longer the case. Baseline data gathered before the start of a season is used to treat athletes, helping to assess the extent of the injury – and determining when a player is fit to return to action. “This will be a real boon to athletes. We’ll be able to make physical contact sports much safer.”

Athletes undergo pre-season testing to establish baseline data, documenting their reaction times, ability to recall, and basic cognitive functions with such subjects as math and logic. Post-concussion testing would typically show a decline in results. During recovery, when test scores improve and eventually match the baseline data, it would indicate that the injury has healed. “Last year we pre-tested only for football. Next year, we’ll do more sports,” Kauffman said.

Kauffman also has a special interest in ligament tears — an injury that he said is more of a problem for female athletes.  “They’re more common in women for a combination of reasons,” he said. “Women tend to land differently than men. A male bends and squats as he lands. Women often land with their legs straight and as a result they hyper-extend.” He said that training women to use a better technique and to incorporate specific exercises in their conditioning can greatly reduce ligament injuries.

If training and experience are the best indicators, student-athletes, parents and coaches can rest assured they are in good hands with Kauffman. After earning his medical degree from Cornell Medical School in Manhattan, he completed his residency at New York University’s Hospital for Joint Diseases. He then put in an extra year in his subspecialty, sports medicine, at the renowned Kerlan-Jobe Clinic in Los Angles. It was a top-shelf introduction to the world of sports injuries. “Doctors there worked with the Dodgers, Lakers, Kings and Ducks,” Kauffman said. He even got sprayed with the same locker room champagne as Kobe Bryant and Shaquille O’Neal after the Lakers won the NBA championship.

Kauffman learned surgery and how to treat sports injuries from some of the best doctors in the field – most notably Dr. Frank Jobe, inventor of what came to be known as “Tommy John” surgery.  “It’s quite a story,” Kauffman said, describing how John, a pitcher with the Dodgers, injured the medial collateral ligament in his left elbow – his throwing arm.  He went to Jobe for help.  “Dr. Jobe told him there was nothing he could do for him, but John insisted, ‘I’m sure you can come up with something,’” Kauffman said. “He went home and in his study that night came up with a procedure [incorporating] techniques he had used in pediatric surgery.” John’s comeback was considered a miracle at the time. He went on to win 164 more games, including a successful stint with the New York Yankees. The surgery, common now, has saved many a pitcher’s career.

California was Kauffman’s home for 10 years. He practiced medicine in Sacramento and served on the faculty at University of California-Davis where he taught sports medicine and surgery to resident doctors. He also tended to the needs of college athletes and the River Cats, the city’s triple A baseball team.

Kauffman grew up in Ossining and in March moved back east in order to be closer to his family. He now lives just outside Cold Spring with his wife and daughter. It seems only fitting that he is an athlete himself. “I like doing triathlons, enjoy snow shoeing, biking and cross country skiing — and I play hockey,” Kauffman said.