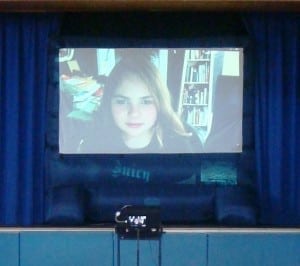 On Wednesday, Nov. 30, the Garrison Union Free School (GUFS) held an interactive assembly using Skype technology in the school’s gymnasium. GUFS “virtually” welcomed Olivia Bouler, a 12-year-old ornithologist who wrote a book filled with her original bird drawings to raise money for wildlife endangered by the Gulf oil spill. Her efforts have raised more than $200,000 and have brought her national attention, including an invitation to meet with President Obama at the White House.

Appearing on a large screen over the gym stage, Bouler described her motivation, based upon seeing birds and other wildlife helplessly trying to care for their young in the midst of the oil spill. “Kids are the next generation,” she said. “We are going to be the ones to stand up for the animals and the environment.  Kids can believe in the impossible.”

Bouler said she had a strong connection to the Gulf of Mexico after spending many summers there with her grandparents. She has always loved to draw and combined her passion with the idea for a book, which became Olivia’s Birds: Saving the Gulf. Bouler made it easy for her audience to connect with her. Dozens of students raised their hands during what became an extended Q-and-A session. In response to one eighth-grader’s question about how to start her own effort, Bouler advised that she needed to feel passionate about the cause, find a platform and a hook that uses her talents, (like she did with her writing and drawing), and use social networking to spread the message among all her friends so it will “go viral.” When asked by a fourth grader how her success helping the Gulf Coast birds has made her feel, she replied, “Fantastic!”

One thought on “Olivia’s Birds: Saving the Gulf”