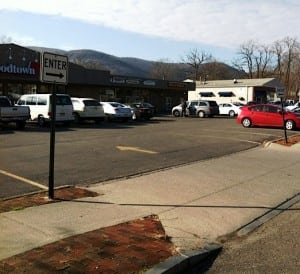 Approval by Planning Board seems likely down the road

From the Cold Spring Planning Board’s perspective the mission is straightforward:  Save the post office and allow the Foodtown supermarket to expand.  This means do the work necessary to fit an expanded supermarket and a new post office onto the same lot space consistent with the village building code or with reasonable variances to the code through the Zoning Board of Appeals (ZBA); account for the impact of increased commercial delivery and customer vehicular traffic and the need for more parking in a manner consistent with contemporary standards of traffic management and public safety as well as state and local traffic laws; and take into consideration the concerns of nearby residents who fear the impact of increased traffic and business operations on their neighborhood. The mission gets accomplished by many hours of sleeves-rolled-up deliberation by the appointed, volunteer board members in their claustrophobic conference room, in the Cold Spring Village Hall, hammering out the site-plan details with developer Gus Serroukas and his architect Mike McCormick.

But, as was clear at the latest workshop meeting of the board, the residents who live behind Foodtown Plaza, especially on Benedict Road and Marion Avenue, are prepared to reject the idea that the current plan as outlined serves the public interest and most especially that there is a practical, acceptable way to fit the enlarged operation into the existing space without harmful consequences for their lifestyle, not to mention violations of village code. According to four residents who showed up for the meeting on Tuesday night (Dec.13) and one who wrote a letter, they are creating a formal neighborhood association as a platform for their resistance to the otherwise likely approval of a plan to enlarge the plaza operations. The residents have been objecting to the idea for two years and expressed surprise that the idea had again gained momentum recently with yet another deadline approaching for the post office lease. They believe Serroukas has used the constant threat of no lease agreement for the post office as leverage over the planning board and village elected officials to accommodate his plans. 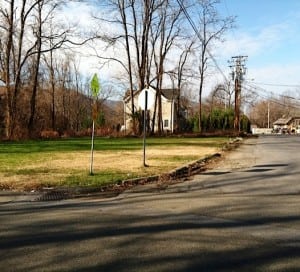 The idea of using this empty lot at corner of Benedict Road and Marion Avenue for postal vehicles has been put aside although some planning members like the idea. The lot is zoned residential.

Although postal officials have expressed an interest in remaining in Cold Spring, this local argument is taking place just as the entire U.S. Postal Service is facing bankruptcy with debt in excess of $14 billion and no clear path to solvency. Postal officials have already proposed closing half of the service’s regional mail processing centers, which will result in slower, more expensive mail and possibly eventual cancellation of one or more days of mail delivery. Congress, which doesn’t fund post office operations but has veto power over plans, has yet to agree on a package of loans and reforms. In July of this year, the postal service released a list of 3,700 post offices being considered for closure (out of 32,000).  Neither Cold Spring nor Garrison was on the list.

At the planning board’s last two workshops, which the public can attend but at which it cannot speak, members spent considerable time parsing the best parking strategies, having already accepted the general idea of moving forward with the plan to expand Foodtown and have a new post office next to the location of the present one. Members argued amongst themselves over the best approaches to allow for likely increased deliveries to an expanded Foodtown in the rear as well as finding adequate parking for postal vehicles, which the postal service insists be parked on post office property. At a previous workshop, the members had debated using an empty lot behind the post office, which Serroukas owns, for parking postal vehicles. But they moved away from it as the lot is in the residential zone and would meet stiff resistance from area residents. The current Serroukas plan doesn’t create any new parking spots in the plaza, while a couple more might be available along Chestnut Street/Route 9D if the current entrance is closed and one is opened on Benedict Road, where the exit is already located.  That idea seemed to gain favor this past week. A previous idea for another curb cut on 9D to create an exit and entrance fell to the wayside when the engineering consultant to the board estimated the New York State Department of Transportation (DOT) would probably take six months to approve the cut. Apparently the DOT will only take half the time to approve closing a curb cut.

For the residents, trying to find fixes for delivery trucks turning around on Marion Avenue, or cars turning into Benedict Avenue just across from the Drug World Plaza, misses the larger point that the whole plan is unworkable from a safety standpoint and, in their eyes, inconsistent with existing village codes and planning for the future. “The net result … is the annexation of all entry and exit points to this neighborhood for the benefit of the Foodtown Plaza developer — effectively trapping these taxpaying residents behind a box store/supermarket complex and its parking/delivery/truck storage,” wrote Tom Campanile of Benedict Road in a letter presented to the planning board by Peter Henderson, an active opponent of the plan. Henderson was joined by Janice Hogan, another active opponent, in testily reminding board members about their safety concerns — despite the prohibition on citizen input at such sessions. Chairman Joseph Barbaro assured them they would have ample opportunity for comment at a public hearing before final plans are approved.
The board has scheduled another workshop for Jan. 10.  With the residents living near the Foodtown Plaza aroused over their deliberations, the board may have to find a larger venue for the meeting.
Photos by K.E.Foley