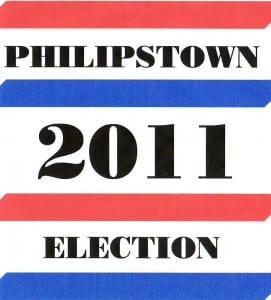 Every election campaign has its own dynamics and often participants, supporters and observers get caught up in the contest’s elements, ending up inflating the particular characteristics and differences with the past in accounting for the results. No question the 2011 Philipstown town supervisor and councilors’ campaign had its share of new or bigger factors. More money was spent, bigger campaign signs dotted the landscape, more elaborate campaign brochures were mailed and all went together with greater political party identification, more partisan sniping online and in print along with negative political advertising especially, but not exclusively, by the challengers. And there was more media coverage with web-based news and reader comment from Philipstown.info joining the weekly print contribution of the Putnam County News and Recorder’s news, letters to the editor and abundant paid advertising.

But when you examine the final 2011 voting results recently posted by the Putnam County Board of Elections and compare them with the statistics from prior years you see not much change has occurred in the prevailing voter patterns within Philipstown, notwithstanding claims of new trends and momentum in some quarters. Presently, Democrats enjoy an approximately 2,700-1,835 advantage over Republicans in voter registration within Philipstown, with 1,730 citizens not checking a party affiliation. In 1999 the Democratic advantage was only 1,911-1,780. In the decade since, Democrats added about 800 registered voters while the GOP added about 50 voters, trailing behind “no affiliation”  which had about 100 more. This unmistakable trend line accounts for the Democratic sweep of the town supervisor and board races and the elimination of the last Republican on the board.

In the town supervisor race, Richard Shea beat Lee Erickson 1,835 to 1,289 or 59 percent to 41 percent, a clearly impressive victory after a seemingly hard fought campaign. About 49 percent of the eligible voters went to the polls, up slightly from  2009 when 46 percent voted but slightly less than the 50.4 percent who voted in the 2007 race. Another trend line that holds up as you go back all the way to 1999 is that half the town’s registered voters don’t care enough about who runs the local government to bother to vote. That turnout contrasts with an 85 percent turnout in the last two presidential elections in 2008 and 2004, which the Democratic candidates, Barack Obama and John Kerry, won each time.  Higher turnouts, as many political scientists argue, usually don’t significantly change likely electoral results unless there are strong mitigating factors such as a scandal or other compelling message for throwing out the incumbents.

The Democrat Shea’s total vote was only 140 votes less than his 2009 total of 1,975 despite what turns out to be the only really significant new factor in the campaign—the decision by the small Independence and Conservative parties to back the Republican Erickson. Not a surprise really as these parties are ideologically more aligned with the contemporary Republican Party. They had, however, backed Shea in his first attempt at supervisor in 2009, apparently not happy with the then-Republican nominee, Matthew Mastrantone, and they had backed Democrat Bill Mazzuca when he ran against Republican Vinny Tamagna in 2007.

In the 2009 race, Mastrantone received 791 votes on the Republican line. Shea garnered an extra 395 votes from the small parties. In 2011 Lee Erickson managed 895 votes on the Republican line with a 411 combined total from the other two parties, almost identical to the number Shea received previously. Shea managed to blunt the 400-vote switch in part by providing people who cannot bear to check a Republican or Democratic box with the Philipstown Team line that attracted 121 voters.  Both Shea and Erickson also managed to stimulate their respective major party bases to the tune of an only 100+ votes more than the 2009 campaign. Demonstrating that most of those who aren’t interested remain so under similar conditions.

In the races for councilor seats, Democrat Nancy Montgomery held on to her seat with a ballot-leading 1,841 votes and Dave Merandy won elected office at town level for the first time with 1,658. Both major parties ran as partisan teams and the members received similar vote totals, with the Republicans almost identical at about 1,280 each.

In addition to presidential and local candidates, other Democrats generally do well in Philipstown, including long-serving Assemblywoman Sandy Galef and two-term Congressman John Hall who nevertheless lost to Republican Nan Hayworth in 2010 in the sprawling 19th congressional district. This year the Democrat candidate for county executive, Alan Schneider, only narrowly beat the winner, Republican and Tea Party favorite Mary Ellen Odell, by 88 votes in Philipstown. Schneider had little campaign presence on this side of the county and was rarely identified as a Democrat in his advertising.  Odell outpolled Lee Erickson by a little over 100 votes.

One local race to watch in 2012 is for the county legislator seat occupied by Republican Vinny Tamagna since 1994. Tamagna ran unopposed the last two elections. When he ran against Democratic Party veteran Ande Merante in 2003 he won by only 36 votes.