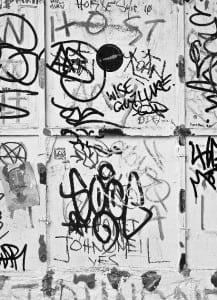 Sabbaticals are not solely the province of academics.  True, most people aren’t able to step aside from their day jobs to press a pause button and shift focus to an alternate place or activity, hoping to gain perspective on their life, or life’s work.  But sometimes it does happen, and for Cold Spring’s Phil Heffernan, it was just such a fortuitous chain of events which triggered his excursion into the world of fine arts, and brought forth a series of photographs he will be exhibiting at a new space, Gallery 66, at 66 Main Street, beginning New Year’s Eve.

Entitled Accidental Masterpiece, the exhibit consists of 25 images (out of a folio of 45), of graffiti and handbill-strewn streetscapes taken in New York City’s Lower East Side and East Village between January and September, 2011.  Heffernan, whose primary field is the creation of artwork for book covers, music products and poster design, incorporating photography and ‘the whole graphic process,’ says the sabbatical “fell into my lap.  I had a ‘residential opportunity.’ I took it and it had a tremendous impact.”  Moving into an apartment on 9th Street and Avenue A, Heffernan didn’t have a premise in mind when he took up residence, just a desire to create a fine art body of work as opposed to the commercial art he does for a living. “The fine art is not a vocation — more a compelling application.”  Spending time walking in the neighborhood, Heffernan was “struck with the wallscapes of that part of New York.  The more I shot the more I realized what I was shooting.”  Heffernan decided to put the photographs together as an exhibit because he felt “a great cohesion in the concerns I had and how the work turned out.”

Here is a portion of his Artist’s Statement:

I experienced a different state of consciousness as I walked the streets of the East Village and Lower East Side last December. Parking rules had emptied the street of cars, and I stood there surveying a long panorama of storefronts and brownstones and billboards and doorways on East Fifth Street, newly rendered visible as a whole. I saw 5th Street as I’d never seen it. Before me lay The Art Museum, its long corridors filled with the paintings of DeKooning, Pollack, Still and Kline; sculpture by Duchamp and Nevelson; drawings by Klimt, Twombly and Miro; street sounds by Glass and Cage.

The curtain had been raised. I felt not like a photographer but as a curator as the mean streets were transformed. I was the Sorcerer’s Apprentice, left alone in a world of beauty and meaning to which only I had the keys.

This work does not follow in the hallowed photographic traditions of technique, decisive moment, journalism, or pictorialism. Rather, my concerns are transformation. I am an eager participant in a world of the mundane now revealed as masterwork created by others from the fourth dimension of time. If I am right in my seeing, then the world now contains almost an infinite collection of brilliance. I feel present at the creation. This work is a study in that experience.

Heffernan grew up in Manhattan.  Asked if he felt he was seeing the city’s streetscapes differently, having lived for an extended period of time outside of it, he mulled it over, “Probably not; people who live in an environment usually take it for granted.  My seeing it again, in a different lens, was instrumental in this epiphany coming about.”

It was important to Heffernan to show the work here in Philipstown, and from that desire has sprung the new Gallery 66, the latest space devoted to displaying art on Main Street in Cold Spring [SEE TERENCE DONOVAN]   and Concrete Gallery , following in the footsteps of the long-established Marina Gallery.]  This exhibit, which runs through Feb. 1, 2012, is an experiment, testing the waters.  If it is successful, it may well lead to an expansion of the gallery beyond the current limits of time and space.  Heffernan hopes so, “It’s a very positive notion thinking of Cold Spring as an art center.  It would be a strong economic influence on Main Street.  We’re sending up a trial balloon and if the economics work, everyone will be happy.”  Heffernan knows of what he speaks, having served as a Village Trustee for a number of years.  Asked if his future might include a return to local politics, Heffernan hesitated, saying “my dance card is very full right now.  In addition to all of this, I’m also in graduate school and hitting the books hard.  Short-term plans: I have none, but as a citizen there is always the possibility of feeling compelled to become part of the process again.  But it’s a big undertaking.”