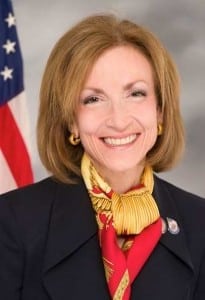 Resolution of House/Senate impasse her goal

Named to the conference committee of the House of Representatives and Senate to thrash out details of controversial payroll-taxbreak legislation, Rep. Nan Hayworth said last week that she looks forward to resolving the issues dividing the Republican-controlled House and Democratic-controlled Senate. A Republican elected in 2010, she serves New York’s 19th congressional district, which includes Philipstown.

After weeks of partisan accusations flung back and forth across the Capitol, the House decided shortly before Christmas to back a temporary, two-month extension of the payroll tax measure and the Senate agreed to establishment of  a conference committee, a bipartisan and bicameral panel used by the U.S. Congress to reconcile differing versions of bills. The legislation deals with unemployment benefits and Medicare physician reimbursement rates as well as with the payroll tax reduction. “I have always supported these programs, and in recent days I’ve been privileged to be a highly visible advocate for providing the greatest possible certainty to hardworking taxpayers, job-creating employers, the growing ranks of unemployed Americans, and our seniors and doctors who rely on Medicare,” Hayworth said on Dec. 23. Noting the differences between the House and Senate approaches, she proposed that “now it’s time to work towards consensus.”