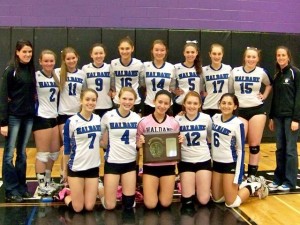 Philipstown loves its sports and when a team does well the entire community swells with pride. That was never more evident than at the Dec. 20 meeting of the Haldane Board of Education. With official business limited to the passing a handful of routine resolutions, the rest of the evening was devoted to honoring the Lady Blue Devils volleyball team, which captured the New York State Class D championship at the final four tournament held in Glenns Falls in mid-November. The tournament proved to be sweet revenge for the team as they defeated arch rival Randolph in straight games 25-19, 25-22 and 25-21 in the final. Haldane had lost to the Randolph in last year’s tournament final. It was a perfect weekend for Haldane as it went undefeated, winning all nine games against Hartford, Thomas Edison and Randolph.

School Board President Joe Curto set the tone right off, “It’s all about volleyball tonight. We’re going to have some fun,” he said. “I tend to get pretty emotional – my daughter is on the team. It was great. You basically demolished the opposition. You didn’t lose a single game and you did it with a smile on your face. You represented yourself, your school and your community very well.” Several others in attendance joined Curto in praising the team and its coaches. “You represented Haldane really well. You were respectful. You really showed class. This is a really big accomplishment and we’re really grateful for how supportive the community was,” Trustee Dave Merandy said.

Superintendent Mark Villanti gave the team what might have been the ultimate compliment of many heaped on players and coaches during the evening. “You may be the best, highest performing team in the history of Haldane,” he said. High School Principal Brian Alm, a former coach himself, kept the praise coming, congratulating the team for its work ethic and coachability. “And you have ‘swagger,” Alm said. “Even if you don’t follow volleyball, you can’t help but love this team.”

Athletic Director Tom Cunningham talked about the 2010 state tournament in which Haldane lost to Randolph in the final. “I remember the opening ceremonies – the look on your faces. It was your first time there.” In his view, the previous year’s loss was “a life lesson.” Going into this season, “You knew everyone [on the Blue Devils] was coming back. You knew what you had to do,” he said. “This time [at the opening ceremonies] you acted like you had been there before. You knew what you had to do to achieve your goal.” 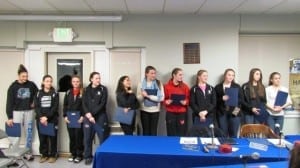 Richard Shea was the first of several elected officials to offer congratulations to the team. “These moments are fleeting…enjoy it. The town board and…the whole town is very proud of you. You should be very proud of yourselves,” he said. Shea then read a formal proclamation passed by the town board in honor of the team and its victory. Bruce Campbell, deputy mayor of the Village of Cold Spring and a former Haldane School Board trustee also congratulated the Lady Blue Devils and read a proclamation passed by the village board in the team’s honor.

Accolades also came in from a number of elected leaders who were unable to attend. New York State Senator Greg Ball, New York State Assemblywoman Sandy Galef and Vinny Tamagna, Chairman of the Putnam County Legislature, also submitted laudatory statements and proclamations that were read to the team.

Coach Melissa Rossano, who won a state volleyball championship as a player at Haldane in 1988, spoke about her pride in this year’s team and the importance of community. “I was very proud of the team. They’re great kids. Great players. They deserved it all,” she said.  “And it really means a lot when the community recognizes and supports them. We’re really a part of the community.”

Two visual summaries of the team’s success at Glenns Fall were presented to the very appreciative audience that filled Haldane’s Mabel Merritt building to capacity. Highlights of the Lady Blue Devils’ tournament wins as broadcasts on Cablevision were shown and can be viewed on YouTube.  A comprehensive slide show of the action, produced by Coach Rossano’s husband, was also shown.