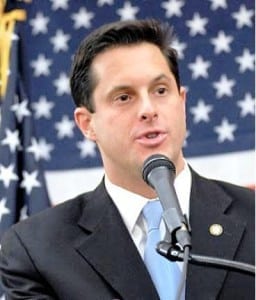 Says passage of bill will not be easy

State Sen. Greg Ball last week advocated a one-year moratorium on “fracking” in New York to allow the state to catch up with necessary funding and means of regulating the industry and its practices.  An oft-controversial practice, fracking – hydraulic fracturing—involves use of injected chemicals and water to break up underground rock formations and extract natural gas.

During a public forum in Lewisboro on Dec. 21, Ball proposed state legislation to put the moratorium in place, though he acknowledged getting a bill passed would not be easy. He commented after a trip to Pennsylvania fracking areas, where, he said, communities have suffered from contaminated water, fish kills, livestock deaths, drastically decreased property values, and destruction of once-pristine natural resources.

The Republican senator predicted that New York Gov. Andrew Cuomo, a Democrat, will not allocate funding in the executive portion of the state budget next year to control fracking. “Without the funding to properly regulate and without the manpower to properly oversee this industry, we must put the brakes on fracking,” Ball said. “A moratorium is necessary so we can get the proper resources and regulations in place.”

Ball said that a Democratic colleague, Robert Sweeney, of Lindenhurst, is committed to sponsoring the legislation in the State Assembly, the lower chamber of the New York State Legislature. As part of his overall fracking-related effort, Ball has drafted what he terms the “Property Owner’s Bill of Rights,” to set standards for fracking companies. Its provisions include:

According to Ball’s office, the senator leads a bipartisan coalition of legislators concerned about fracking in New York.