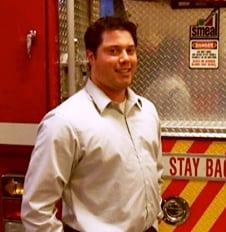 Says proud tradition of company open to all to experience

Matt Steltz‘s important job takes up a lot of his time.  Aside from the daily demands of his duties, he spends many hours preparing to perform them. He also takes advanced training courses, earning a master’s degree along the way, to improve his skills and knowledge. Seems he can never do enough to satisfy his desire to succeed in the role to which he is so committed—Steltz is a social studies teacher in Beacon High School.

So when a reporter encountered Steltz in his other new big job, it was easy to appreciate the extent of the sacrifice and dedication he brings to the position of volunteer fire chief of the venerable Cold Spring Fire Company No. 1. The fire company’s rules call for a chief to be elected by the company membership and serve a term of two years. But a chief candidate isn’t eligible for consideration unless he/she has taken the requisite training courses mandated by the state to qualify for the ranking. As in any firehouse the chief is in charge of the company‘s firematic operations, which includes maintaining preparedness for all contingencies and supervising operations when responding to the scene of an emergency, such as a structure or woodland fire, a car accident, or hikers marooned on a rock face in the state park.

Seated in a cramped firehouse office just off the garage housing the company’s trucks, the 28-year-old Steltz expressed equal measures of enthusiasm for the traditions, the training, the camaraderie and the ever-present need of the company for new recruits.  “This is a real second job; there’s always something that needs to be done,” said Steltz, whose roots in the company date back to his grandfather’s day, with his father and brother also serving time as members. “I joined at 16, I don’t think I had a choice, really.  It wasn’t under pressure or anything. I grew up in the firehouse amongst all the volunteers. I just felt giving something back was something I had to do.”

For his first two years Steltz participated in every aspect of training except entering a building with fire. He responded to calls in gear, pulling hose, directing traffic and performing other duties in support of the response team. At 18 he was fully certified as a line firefighter. He emphasized his own youthful history as a reminder to local young people that you can join the company at 16 and “get actively involved right away. You get your gear the night you join. We offer young people something to do at a time when they are looking for something to do. It’s an opportunity to get off the street corner and learn new things and develop a sense of responsibility, a sense of commitment,” he said.

Steltz focuses on youth because responding to emergencies and doing the hard work of training is primarily a younger person’s pursuit, given the physical challenges and time-consuming classes needed for advancement in the ranks. Officer ranks include three levels of lieutenant, then captain and assistant chief. “It’s a lot harder when you have a family.  As chief I know I feel obligated to respond to all calls (when he’s not teaching),” he said, as he mentioned his own desire to someday have a family.

Steltz frequently references the tradition of the company, but has his sights firmly on contemporary issues. “I take pride in the 1896 origins but what’s important is that you have to keep up on training and tactics. We have to be progressive thinkers,” he said citing two recent phenomena –hybrid electric cars and energy-efficient house windows—as new challenges in emergency extractions and firefighting.  The hybrid car has a main electrical wire, which can be dangerous if cut during an attempted rescue of passengers.  The newer windows effectively trap heat in a house to keep it warm but do not easily blowout when a fire gets started, adding to a fire’s fury.

“I can’t live 10 years in the past, when I had more of a sense of adventure about responding to calls. My job involves worrying about liability if a truck has an accident.  We have seatbelts in the trucks now. Today firefighting is about being professional. Otherwise you are risking your own life, the others with you and the public. There’s no difference between being a volunteer or paid firefighter when it comes to a fire. The fire doesn’t care,” said Steltz.

Drills are held every Tuesday and there is always something to work on, whether it’s general procedures for response to calls, equipment maintenance, tandem training with neighboring companies or specialized responses such as rescue from the elevators at the Metro-North station or finding and extracting injured visiting hikers in Hudson Highlands State Park (10 times this past year). Twenty members of the company have the interior firefighting rating. Steltz has undergone extensive training with firefighter survival, search tactics, and wildfire suppression — among the classes that have taken him to Carmel twice a week for months at a time, to achieve his rank.  He is currently the only member of the company qualified for passenger-train extraction.

Steltz is most proud of the Cold Spring company’s record of always mustering the necessary crew to roll out a truck in response to calls, over 140 both this and last year.  He is keenly aware his efforts at leading the company will only be as good as the support he gets from the membership, which has among it more experienced (if sometimes less trained) people, some of whom have already served as chief.  “People-skills are a huge part of the job. You could be the best-qualified firefighter but you have to be able to deal with people if you want to do it well and have the public be satisfied and have efficient fire supervision,” he said.  “Everyone’s time is valuable and equal; you have to remember that, you can’t forget.  Without the other members, I am nothing,” he added.

“I have a sense of pride since I was born and raised here.  But I want everyone who lives here, regardless of when they arrived, to experience the camaraderie and friendship and sense of giving back to the community available in the fire company.  People are missing out on it.  We really are open to everyone and everyone has a skill we could use whether or not you become a full member of the company,” said Steltz. Like other fire officials, he worries about Cold Spring becoming more of a commuter community, leaving working people less time to volunteer for large commitments such as the fire companies.  Steltz points to daytime, when so many people are at work far from the village, as the most vulnerable time of day. He said he is holding discussions with village officials to see if company members who work for the village might be allowed to respond to alarm calls during the workday.

While actual fires continue to decline nationwide due to more stringent building and product codes, emergency calls are going up in the area as more visitors in cars and in the parks cause accidents and other situations requiring response. And there is always the ever-present threat of disaster from weather and human sources.  Steltz is hoping to acquire a new boat and improve the company’s nautical rescue skills during his tenure.

Aside from training and recruitment, a lot of a chief’s time is taken up with ministerial duties, including responding to phone calls about fire hydrant conditions or home alarm systems or other issues brought up by the public. Through all the work Steltz takes heart from the time-honored custom of children visiting the firehouse, climbing on the trucks, examining equipment, watching drills and expressing an interest in becoming a firefighter one day.
Photo by K.E.Foley