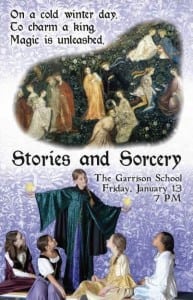 If there’s one thing eleven-year-olds are good at, it’s spinning a yarn, and another yarn on top of that.  Those skills are handily applied to this year’s sixth-grade play at Garrison School. In a program entitled Stories and Sorcery, and calling forth the sixth-grade language arts curriculum of myths, fantasy and science fiction, there is a framework —King Arthur’s Court – and a stories within stories structure.

You see, it’s just after the holidays, and King Arthur and his Court are all suffering from ye olde post-holiday deflation.  The blahs are compounded by their sorrow over Sir Gawain.  He’s been gone for months and is presumed dead. Fortunately, visitors keep arriving from other countries, and to cheer up the king, each tells him a story from his or her kingdom. 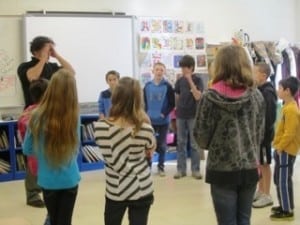 Mr. Berger starts the rehearsals off

And that’s a convenient way to pull together four disparate, but connected tales. For English teacher Ian Berger, that means he was able to write four such tales, based on real fairy and folk tales, but fine-tuned for the students he teaches. He initially tried searching for appropriate material, considering The Canterbury Tales this year, for example, but soon discovered it was more satisfying – and a better fit, as some of those Canterbury Tales are a little racy – to write the play himself, aided and abetted by the students (who make suggestions and are most adept at spotting typos, Berger says.)  Berger wanted the children to get a sense of what classic fairy tales are all about: that they are not Disney, but rather more dangerous – “They are not always safe stories where people achieve their dreams.”  Included in Stories and Sorcery are adaptations of an Irish fairy tale which “doesn’t end as you might expect;” an Italian humorous tale, Salamanna Grapes, which has “three petty princes competing for a princess,” The Seven Ravens, which “has a shocking moment in it,” and a tale of the court, Sir Gawain and the Green Knight. 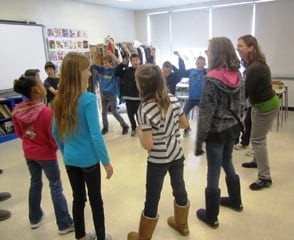 The entire class participates. Each student is asked if s/he’d prefer a big part or a small one (less than half elect for a large role, and some kids play multiple characters).  Children help rustle up the costumes and props, with some behind-the-scenes help from parents, who act as de facto “producers.”  Berger is helped by Katie Feder, a theater professional from Peekskill, who acts as drama coach and co-director, for, as Berger states, “She gives it the little touches which make it come alive.  Things that I don’t have the experience or training for – I’m an English teacher.” As the actors gathered for rehearsal on their first day of school after the holiday break, desks were pushed to the edges of the classroom as Feder got them to form a circle and loosened them up with some stretching, head rolls, breathing exercises and tongue twisters: “You know New York. You need New York. You know you need New York.” Then the actual rehearsals began. The holiday assignment was to get “off book” and have all lines memorized. As in most productions, this had been partially, if not completely accomplished by the target date. One student was assigned to be “on book” and was there to provide the lines for anyone who was struggling. 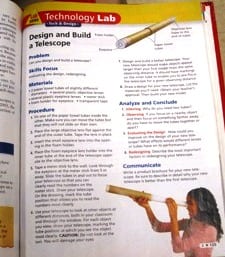 Called into service: a science textbook

The Italian fairy tale was the first to be rehearsed, as a variety of royalty and their attendants played out their scene.  As a rather dismissive princess addressed one of her suitors, “I may think well of you – when I actually think of you…” Feder reminded the actors to try to avoid grouping themselves in a straight line, to remember that contemporary gestures, such as coughing into ones sleeve, don’t mesh with the medieval time period of the story, and to think of action verbs, changing them into gestures embellishing the text. She challenged them on the text as well: “Are you really complimenting her? No, right? It’s a backhanded compliment, so it’s said very differently.” 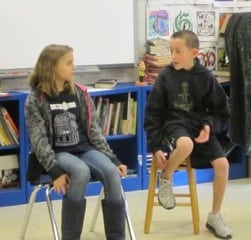 The princess and her father, the king, discuss their situation

A lot of on the spot solutions were arrived at – they had to be, as the rehearsal period is limited to just four weeks, and interrupted by the holiday break (repeated changes in the State’s scheduling of the English Language Arts State test created a bit of havoc with setting a firm date). Props for a market scene were determined right then and there: “We have to figure out how to make a market. What are you selling? ‘Apples.’ Easy – a basket. You? ‘Carpet.’ Okay, a little rug, rolled up – can you get one? How about you? ‘Sausages.’ Sausages!  Okay, here’s a trick. Get a pair of pantyhose. No one wears pantyhose anymore, but ask your mom, I’m sure you can find a pair. Stuff it with other pantyhose or old socks and tie the ends off, like sausages and you’ve got a sausage!  And you? ‘Telescopes.’ That’ll be harder. ‘Wait – our Earth Science textbook has a page on how to make a telescope.’ Go get it.”  A few minutes later, locker retrieval of book accomplished, page turned to indeed, “How to Make a Telescope.” That’s showbiz, Garrison-school style! 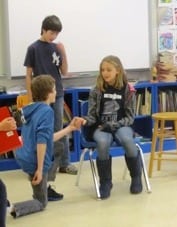 On bended knee, making a proposal to a princess…a prince of course

Berger also guides the 8th -grade class in their annual production of a Shakespeare play.  [CLICK HERE TO READ ABOUT LAST YEAR’S PRODUCTION]  This 6th-grade experience is a building block to that one, and the differences are striking, notes Berger. “There is huge growth between sixth and eighth grade. You can’t do a ‘real’ relationship in 6th grade. You just can’t do the falling in love things. By eighth grade they are still a little uncomfortable, but it works. The other big change is just in the subtleties – a lot more subtle humor comes into it.” The goals for each are both literary and theatrical, and, according to Berger, “it’s a great method of teaching speech. We teach projection, and how to achieve an awareness of how they’re verbally communicating.  It’s tremendously helpful with public speaking, in front of the class. Electronic communications have taken a toll on written and verbal communication and though it can’t be changed, it’s a goal here to change that a little.” 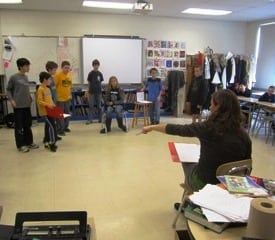 Class member Alexa Gagnon is a theatrical veteran of sorts, and she’s really enjoying this experience.  She’s done plays at camp, and at Rec and was ready to make her mark here. She asked for a big part, because: “I’ve done a lot of plays, but never got a big part, but I still enjoyed doing them.” Gagnon feels ready for it now, as opposed to when she and her classmates were younger, “Now we know how to change our voices to let the audience know how our characters are acting and feeling. We also understand the humor better.” She describes her role: “I play a Druid.  A nature Druid.  My character works for the king. I use my magic to try to stop the king’s son from running away. I have power, but I fail.  I end up on the floor, in pain. It’s fun.”

There will be two performances of Stories and Sorcery. The first, on Jan. 12, during the school day is just for the other children at the school, while the second is open to the public (and they’ve love for you to come). That one takes place on Friday, Jan. 13 at 7 p.m. in the school’s auditorium, and is free of charge.