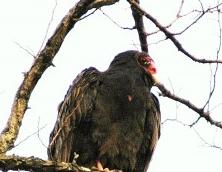 They are now noticeable by their absence from the skies over Philipstown. With winter approaching, albeit slowly, they have headed south to warmer climes. One of the planet’s most impressive birds, the turkey vulture is also probably one of the earth’s more misunderstood species. With a wingspan of six feet, it rivals the bald eagle in size. And at a time when energy conservation is appreciated more and more, the sometimes maligned turkey vulture could teach humans a thing or two. It is a master of flight, able to soar on thermals, or updrafts, for hours at a time without flapping its wings. It wastes very little energy. Think: energizer vulture

Suzie Gilbert  is a wild-bird rehabilitator and author who lives in Garrison. “I love turkey vultures because they are so … cool! They’re very smart and very funny,” she said. “People don’t think of them as being playful but they really are. They’re very social birds and the really social ones engage in play and group dynamics.” One wildlife website reported that in a rehabilitation center, an injured but playful turkey vulture took great delight in constantly untying the attendant’s shoes. When he switched to velcro-fastened shoes, the turkey vulture quickly figured out how to undo them as well and resumed its daily ritual.

Admittedly, few people, even those with poor eyesight, would argue that the turkey vulture will ever be in the running to win the bird-world version of Miss or Mister Universe. When viewed up close, they are by any definition one very homely creature.  They are as ugly when seen at the side of a road as they are beautiful when viewed soaring in flight. Much of that ugliness can be attributed to their featherless, red head. They were named “turkey” vulture because their head resembles that of the wild turkey. As with most things in nature, that unattractive, featherless head is that way for a reason. Turkey vultures eat mainly carrion — which in Philipstown usually takes the form of animals killed along roads. When munching on roadside remains, turkey vultures often dip their heads inside the carcass of the dead animal. Over time, the bird has evolved, losing its head feathers which otherwise would act as a catch-all for bacteria from the bits and pieces of the dead animal’s remains. Think: a man with a thick beard full of food bits after a meal. Perhaps the turkey vulture has evolved more than some humans. 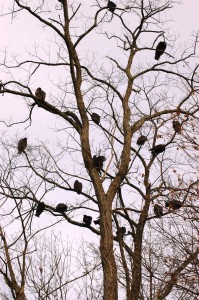 More than a dozen turkey vultures hang out on a tree on Chestnut Street, above the West Point Foundry Preserve

The turkey vulture’s behavior has not always endeared it to humans, either. When threatened, it will vomit partially digested food onto its perceived attacker, an action that creates a real stink — and not for the turkey vulture. And while many other bird species are much admired for their musical calls and early morning songs, the turkey vulture has no voice box and is limited to making hisses, grunts and a hoarse rattle. Think: Tom Waits. Or maybe Bob Dylan.

But they definitely have strengths that humans can appreciate. Turkey vultures are actually very clean — and they make things cleaner and even safer. “They’re nature’s ‘cleanup crew’ and they perform an essential role in the environment,” Gilbert said. Because they eat dead animals, people often assume that vultures are disease-ridden — when just the opposite is true. They probably prevent the spread of disease. Their food is digested with the aid of stomach acids that are so strong that meat is broken down quickly, giving pathogens no time to cause infection. Basically, vultures eat contaminated meat and sterilize it in the process. Experiments have even shown that disease-causing organisms as deadly as anthrax are killed by the vulture’s stomach acids. They also urinate on their legs, another habit that seems pretty disgusting. But they do it for two reasons: Evaporation creates a cooling effect on hot summer days and the acid contained in the urine kills bacteria on their legs. As gross as it may sound to humans, urinating on themselves is considered a matter of personal hygiene to turkey vultures. Think: nice hot shower.

If bad looks and seemingly ill-mannered behavior aren’t enough, some humans also resort to conjuring up ill-founded beliefs as a reason for not warming up to turkey vultures. Gilbert says that they have an image problem with some people “mainly because of superstition. They’re big, dark and kind of scary looking. And because they eat dead things they’ve come to be associated with death.” Gilbert pointed out that humans eat dead things almost exclusively as well. “When was the last time you ate something that was alive?” she asked. Think: good point! Many people also believe that when vultures are seen soaring above, it means there’s a dead carcass below. Not necessarily. Many information sources point out that it can also simply mean that the birds are searching for food, gaining altitude in order to fly further away — or just playing.

The black vulture is also becoming more common in the skies over Philipstown.  “Black vultures never used to occur in this area but they are now moving up from the south,” Gilbert said, attributing the shift in range to our climate becoming warmer. So far at least, their turkey vulture first-cousins have not objected. “You’ll see them in mixed flocks now. Turkey vultures have a very good sense of smell but poor eyesight. Black vultures have very good eyesight but a poor sense of smell. So they get along — sort of — but you won’t see them rubbing shoulders. You’d never see black vultures perched in trees along with the turkey vultures. “

There are some clear differences between the two species. Black vultures are smaller and are short-winged. They don’t soar in the non-stop fashion that turkey vultures do, having to rely on flapping their wings much more often. And turkey vultures adopt a marked “V” shape when soaring and are known for their distinctive wobbling and teetering back and forth in flight. The black vulture has neither of those characteristics.

Locally some favorite turkey vulture hangouts include Foundry Cove, the area across from the Plum Bush Inn on Chestnut Street and rooftops just north of Main Street in the area of Stone Street — and of course in the skies above Cold Spring.  “I’ll often stand watching them soar above the Foodtown parking lot,” Gilbert said.

Turkey vultures migrate south when the weather turns cold — Mexico and Central America being popular destinations.  Gilbert said they do sometimes stay in this area over the winter. “I had one come around one winter looking for food. I had some frozen rats already thawed out (for hawks she was rehabilitating) and I put one out for him. He was very happy.” Think: always keep snack food handy. 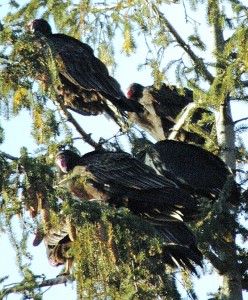 Four members of a large “venue” of turkey vultures preen in a fir tree on the lawn of the old Butterfield Hospital, Cold Spring

If some people get jittery at the sight of 30 or 40 turkey vultures flying overhead or coming to roost in Cold Spring, they can at least take heart knowing that things could be much more nerve-wracking. In a story on Jan 4, Mother Nature Network  reported that on a street in Lee County, Ga., residents have been playing host to 500 to 600 turkey vultures in recent days. Some of them may be from Cold Spring. The birds depart each morning to hunt and return in late afternoon. The people on that street are not too happy. As one resident put it, “It scared the crap out of me.” Think: Alfred Hitchcock must be smiling.

For those who may think that Suzie Gilbert is alone in her appreciation of turkey vultures consider these tidbits:  The magazine Vulture News is published twice yearly and has correspondents from around the world;  each September,  Weldon, Calif., hosts the Kern Valley Turkey Vulture Festival — with turkey vultures cooperating to the point that about 30,000 fly overhead during migration; and, The Turkey Vulture Society  — yes there is one — was a key source of information for this article.

Other Facts About Turkey Vultures You Can’t Live Without

3 thoughts on “Philipstown's Wild Side: The Turkey Vulture”