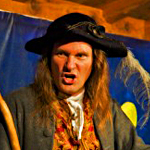 His singular occupation took a while to evolve

It is pretty much impossible to begin a story about a storyteller without that evergreen Once Upon a Time.  So, we’ll surrender to that hoary, but still evocative phrase, and here goes. Once upon a time, in a myriad of kingdoms, places with the very American names of Oklahoma, Buffalo, Katonah, there lived a family, which moved frequently as the father of this family was in the military.

And in this family there were five children, and the eldest, a daydreaming boy, was called Jonathan. When Jonathan was a teenager, things about Katonah, where the family had settled by then, disturbed him. As Jonathan has a way with words, we’ll use his from time to time, “I saw the effects, the ravages, of affluence: disproportionate drug use in kids, people once wonderful in the arts beaten down.”

These things disturbed him, and the path through the forest continued to be twisty at college, at Holy Cross, in Worcester, Mass., where it was then “burnt out, industrial, but the Jesuits cloistered at Mount St. James, and things like meeting the Berrigan brothers charged me up to take on the world.” Jonathan found a means of escape telling tales at night to his youngest brother, who was only in kindergarten.

“I would make up stories about a wandering, innocent figure (really myself), knocked about by forces in life.  Those real life forces turned into bears and trolls in my stories.” Though Jonathan was quite shy in high school, “I wouldn’t go on stage, but the acting bug and the creative bug was festering, and during long walks in Worcester I realized that if you are creative and don’t find an outlet, it will drive you mad.”

Epiphanies usually make an appearance in a story, and Jonathan’s moment of realization came about “at a quintessential Holy Cross keg party. A woman opened a bottle of Narragansett Beer. On the cap was a rebus of the phrase ‘east of the sun and west of the moon’, which evoked a Norwegian fairy tale and a picture book of the same name by Kay Nielson. And in a story within a story within a story, the images from that book of a polar bear and a maiden helped Jonathan come to understand that “many enchanting fairy tales gave you a map for your spiritual course — beyond the cliché of Disney.

“I made the connection between fairy tales and the classics of Homer and Ovid and to the Greek plays as well. At Holy Cross there was a tradition of performing Sophocles, Aristophanes and Euripides with a modern twist.  I had also enjoyed children and thought childhood should be a more magical, nurtured time than it often is. As an English major also interested in art, I originally wanted to write and illustrate children’s books.”

Epiphanies are sometimes followed by encounters which exist to test them, and such occurred at the end of Jonathan’s college days, on a visit to Harvard Square, “I wandered into the square and saw an enchanting figure — an elongated, African-American man covered in ribbons and bells telling the story of Othello spontaneously.  His name was Brother Blue. I saw the possibility, then knew my calling was not the priesthood my mother might have hoped for, nor the executive track at Mobil Oil my father might have preferred, but was instead to perform for children as a storyteller.” 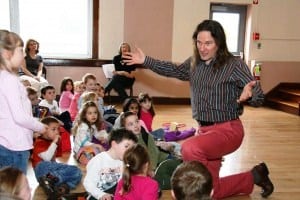 As there simply must be obstacles in the path of achievement of goals, so it was that this realization was followed by a stretch as a shoe store clerk, then teen travel counselor, and, finally, as a construction laborer doing renovations. But magic beans were consumed and through some very odd and good fortune, Jonathan was accepted at New York University graduate school without ever having applied (and that’s too long a story within a …. for this particular story).  He studied educational theater, and “creative dramatics,” a technique he still uses to this day to spark children’s creative writing and responses.

Another fixture of such tales, the mentor, appeared in the form of a man now called “He Who Stands Firm” (he was born with a less descriptive moniker), who, in 1980, gave Jonathan his very first booking, at Pound Ridge Reservation, and beyond that, provided ideas on the origins of fairy folk, the mysteries of New York history and a host of other things for a storyteller to tap into, including ethno-biology, and the native people’s use of plants for healing and magic.  He has remained a source of arcane information through the years, being of particular help in 1990 when Jonathan was hired to do his first Historic Hudson Valley tale-telling. Something he continues to do each Halloween Season at Sleepy Hollow. That was just after he and his first wife moved to Cold Spring.

Ah, but this story has now jumped quickly from one decade to another. Not so fast, for that decade skipped, the 1980s, is full of interesting this and thats.  Reality came quickly to pass as the newly-minted storyteller performed at over 1,000 birthday parties in New York City.  “That was my proving ground.  I got the full range of reactions in the city, from the kids bursting into tears at the sight of me, to others clinging onto me as I went to the elevator, unwilling to let me leave.”  In a world of doubling as a “plant-carer” and living in illegal sublets, Jonathan calls himself “an innocent figure at the start, buffeted by life in New York City.  It was a trying, but delightful time.”

Still, Cold Spring beckoned, with his wife’s desire to leave the city, and, having grown up fairly nearby, Jonathan familiarized himself again with the area after doing several residencies at Garrison School, invited by then-teacher now principal Stephanie Impellittiere, who, says Jonathan, “got what I did.” It was a happy move: “I was enchanted by the landscape with the high, rolling hills.”  The confluence of history and lore, the connections between Gouverneur Kemble and Washington Irving, the Dutch and Native Americans all made for a perfect storyteller’s stew. Jonathan felt accepted by the community right away, by the people just moving up from the city and the locals (especially the quirkier ones) alike. “My daughter grew up on Garden Street. My landlord, Jeff D’Amato, only raised the rent two times in 12 years. The community: George Stephenson, Mackey Budney  — I’m no storyteller compared to Mackey — I loved meeting them. I had new characters to observe: Scott Webster, Tom Rolston, Marilyn Heberling … There are so many things which foster connections here: the physical layout drawing people into the village — you actually meet them — the proximity of New York City and its influences.”

He loved his new home so much that he wanted others to come to see its charms and bring riches to all, and so he joined the local Chamber of Commerce, a storyteller amongst shopkeepers and business people.  In the ways of these things, he was called upon to do more, and more again, as he was cajoled to join their board, “they gave us drinks and sweet talked us and then voted ‘All in favor of those here right now going on the board say aye…’ and then had the Chamber Presidency foisted upon him “I was late for a meeting, picking up Chinese food, and they voted me in!”  Still, he was “excited and took it on as a challenge.  More memberships were renewed, and we launched the Sunset Music Series — we made it a fundraiser for a new hook and ladder fire truck.  Having a storyteller as a Chamber president, someone not a divisive figure, helped revive it.  In the end I got a lot of support; it became a form of community service I embraced.”  Now, Chamber president days passed, he is working with the Boy Scouts (he was an Eagle Scout himself), is on the board of Desmond-Fish Library and volunteers for the Farmers’ Market.

And so that sleepy period of contentment which categorizes many a fairy tale has transpired, for 22 years now, in Cold Spring.  A period of constant storytelling, of releasing first audio tape cassettes, then CDs and now downloads (“for some young children no longer recognize CDs….”) and DVDs and touring and traveling the highways and byways, far and wide. The economic recession has thrown another one of those hardship obstacles in the storyteller’s path, but somehow he has persevered and knows he will continue to. His journey of school and historic home performances, “creative programs designed to meet curricular goals, exceed language arts and social studies standards, with a head full of imaginative tales and a heart passionate about inspiring students to learn while actively listening” according to his website, travels on its merry way.  Those stories include not only those about the Hudson, but also Shakespeare, Medieval Manors and Manners and the very self-explanatory Finger Fables for Squiggly Squirmers.

And what about those squiggly squirmers — are they more squiggly and squirmy in these days of electronic device addiction than they were two decades ago?  “The attention spans have stayed constant; the performances are always just under an hour.  They’re always interactive, with a skit to break them up, with members of the audience participants in the story. They get restless and having that interaction is a hallmark, but now I need it more than ever. What has changed is the language. There are commonplace things that the kids no longer know: alarm clock, chicken pox. They don’t exist much anymore.  Also, kids think because of the way I speak that I’m from another country, because the language sounds old-fashioned. They’ve lost some of the language.”

“I thought I would never survive moving out of New York City as a storyteller, but having the inspiration of these Highlands has made it all work. If I had remained in the city I could still be watering plants and doing hundreds of birthday parties. I was worried about my wife’s [Andrea Sadler, a filmmaker and actress and Jonathan’s second wife] adjustment to small town living — she’s from a cosmopolitan scene in Montreal — but she’s found the community has nurtured her, from fellow filmmakers to carpenters, all have charms and enlightenment.”

The storyteller’s wares, with their own blend of charms and enlightenment — including his most recent CD, Santa On The Hudson —may be found and sampled at his website.

2 thoughts on “Jonathan Kruk: A Story about a Storyteller”