It’s sort of a known but not always articulated thing: underneath some of the abandon of high-level improvisation is a structural core, providing the spine from which free-form springs.  The music scene in Philipstown and Beacon has been accelerating for the past decade, with a succession of mini-hubs coming and going, acting as showcases and venues for the many musicians living locally, seeking to perform on their home turf.  What’s been missing has been a central nexus — a place for training, at all levels.  Now, what has been an ad hoc “do you know of a good ‘fill-in- the-blank’ teacher?” network of shared information has been augmented by a new facility dedicated to wide-ranging format of music camps.  From group harmonica classes to private viola lessons, from rock and roll boot camps to a multi-generational choir — all can be found at the new Beacon Music Factory, which officially opens its doors on Saturday, Jan. 7, with an Open House; classes being on Jan. 9. 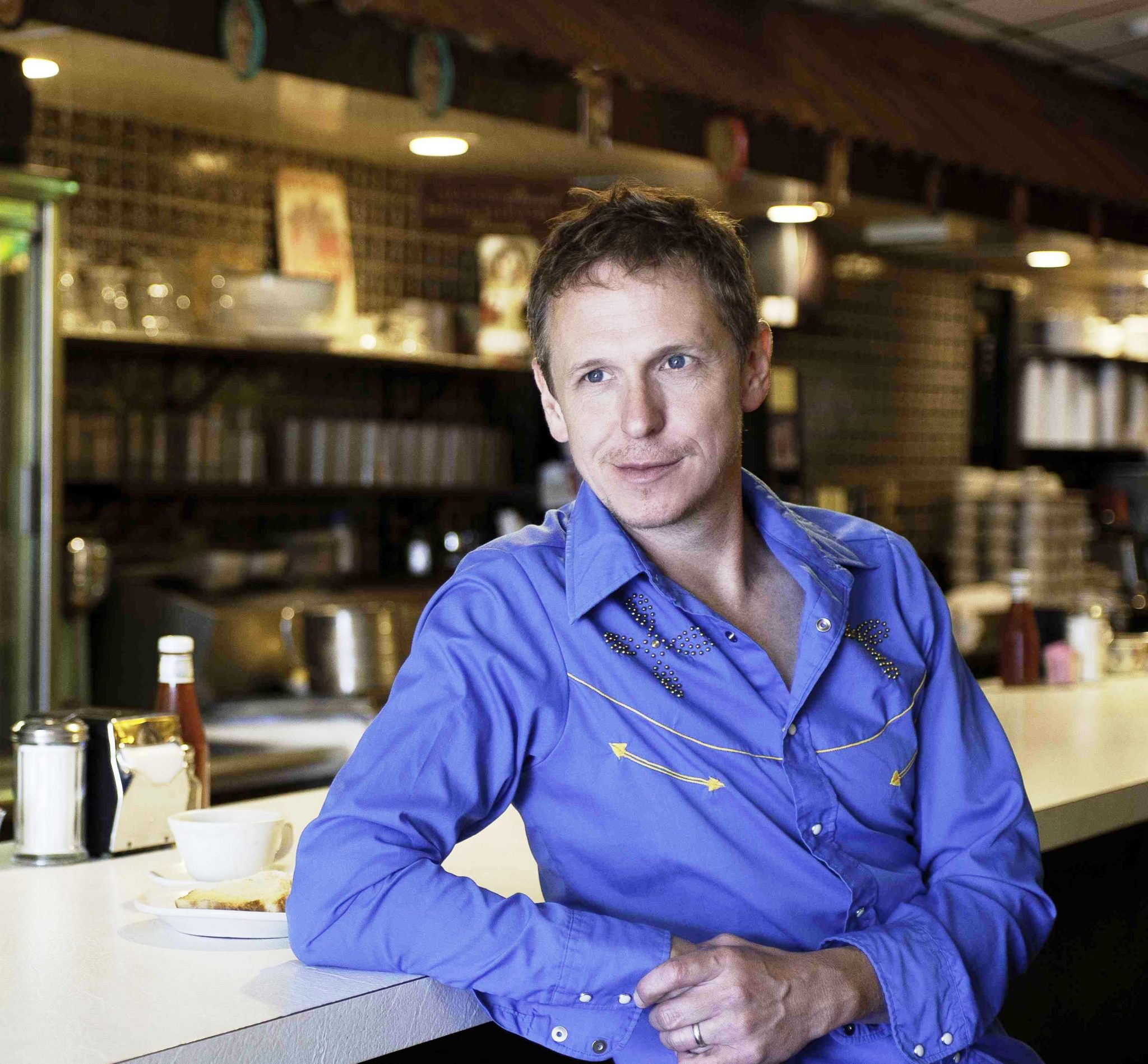 Beacon Music Factory (BMF) founder Stephen Clair, had been searching for a permanent home where he could broaden and expand the Rock and Roll Boot Camp programs he had been operating through Beacon Rec at University Settlement.  He spent months checking out various spaces with a Beacon realtor without finding the right fit.  Fortuitously, on a group hike just a couple of months ago, he mentioned the search to another hiker, who turned out to be Pastor Ben Larson-Wolbrink of Beacon’s First Presbyterian Church, on Liberty Street.  The pastor’s reply: “You should come see our space.” The space proved to be perfect, a proposal to the Church’s Board of Elders was met with approval, and now multiple rooms are to be filled with music.

As a professional guitarist with four solo CDs to his credit, and with an equally lengthy teaching career (he taught music at the Randolph School and continues to oversee the music lessons program there), Clair has been extremely active in the resurgence of music in Beacon over the past five years, and his connections have made it easy for him to round up a group of six highly experienced teachers.  As the founder of Local 845, a live-music concert producer, Clair has produced the Beacon Riverfest, an annual rock music festival on Beacon’s waterfront and was recently responsible for the Electric Windows projection/music party event which took over a section of Beacon’s Main Street. 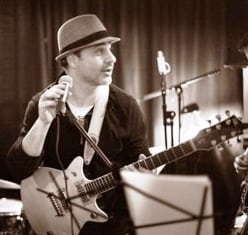 Clair will be expanding upon his Boot Camps, which he first developed in Brooklyn, which bring together groups of kids, teens and adults (in separate, age-defined groups) and make bands out of them in a fixed period of time.  The program emphasizes not only proficiency on an instrument, but on developing skills required to play and perform with others. Clair calls them particularly interesting for young adolescents who “pretty much can’t look at each other at the first session and wind up very chummy’ by the fourth.” Clair calls the adult Boot Camps “amazing.  Plenty of people have played at some point, or never played, but always had a wish.  At a certain age, how are you going to engineer it on your own?  In the adult camps, although the sessions ended at 9 p.m., the people didn’t want to leave.  They were beaming.  It’s so great what making music does for folks.  They all become brand new musicians and magical things happened.”

The Boot Camps at BMF have been expanded beyond just the rock and roll ‘genre’ and include new programs in songwriting (for kids and also for adults) and, country music (of the Hank Williams-esque kind),  Garage Band, Funk (from George Clinton to Afro-beat) and even American Songbook (for all those ‘small combo witty and urbane’ wannabes out there). Most of the Boot Camps run in eight-week sessions and culminate in a student performance open to family and friends.

A full range of classes is offered for the very young, from parent/infant music bonding circles to k-rock dance party/musical game extravaganzas and even a “Junkyard Orchestra” class, where elementary school aged kids “will build and adorn their very own washboards with the most beautiful found things, and make the best sounding kazoos in the world—from PVC pipes. We’ll put our creations to work when we start creating polyrhythms as we develop our own physical musical masterful piece.”

For teenage guitar players obsessed with everything about their instrument, what could be better than Find Your Tone, a class which de-mystifies all the equipment and answers the burning questions: “What the heck is a Humbucker? Fuzz? Overdrive? Flanger? What’s so great about tube amps anyway?  If you understood the last few sentences, this six-session late-afternoon class may be the one for you. Private and small group lessons will be offered in guitar, bass, violin, viola, voice, trumpet and drums. The list is expected to change and grow with time. 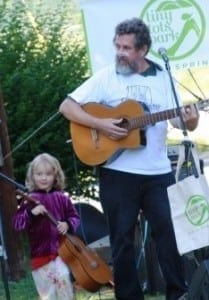 Al Hemberger, jammin' with his daughter

The BMF teachers range from Kathleen Patrick, a conservatory-trained violinist, to multi-instrumentalist and composer Michael Farkas, best known for his work as the front man of the band The Wiyos which opened for Bob Dylan and Willie Nelson on their minor league baseball stadium tour a few years back. Farkas has recently moved to Cold Spring.  Also on staff, representing Cold Spring, are Al Hemberger and Evan Schwartz.  Hemberger owns The Loft Recording Studios in Bronxville, where he has recorded artists from Rihanna to Rod Stewart. He plays and teaches electric bass, acoustic upright bass, guitars and keyboards. Schwartz has been playing guitar with a number of rock and blues bands for the past 20 years and he has been a regular of the tri-state ‘Blues Jam’ scene. When he’s not playing, he’s teaching guitar. Wappingers’s Josh Stark, a bassist, a fixture in Brooklyn’s roots-country scene over the past 10 years, and arts educator Sarah Terrell, who has worked as a teaching artist with the Wolf Trap Early Learning Through the Arts program in Pre-K classes throughout New York City, round out the staff.

As the BMF evolves, Clair sees teachers as drawn by the opportunity to become involved locally, while adding visibility to their own music-making and teaching.  In this as in the Riverfest, the In the Pines concert series at University Settlement and other music promotion that he has done, Clair has had the support of the City of Beacon.  Now that a new mayor has just been sworn in, Clair hopes and says he doesn’t doubt that what he calls “anchor projects” like the Roundhouse complex, the Beacon Theatre and BMF continue to be seen as “really helping Beacon.” Over the next few months, BMF will enjoy “the luxury of creating all the classes and seeing the response.”  Clair feels that many of the teachers, like him, have had to forge new career paths, ones less dependent on touring, now that they have families and new roots in the Hudson Valley. “I wanted to still have a life that’s all about music,” says Clair.  Beacon Music Factor represents a way to do just that.

Most of the teachers will be on hand at Saturday’s Open House, which runs from 12 to 3 p.m. There will be instruments to play, including various sizes of violins.  The church has donated a piano to the new enterprise.  Some classes begin in January, while others start in March. The facility is located at 50 Liberty Street in Beacon.  For more information, or to register, visit the Beacon Music Factory website  or phone 917-806-1348.