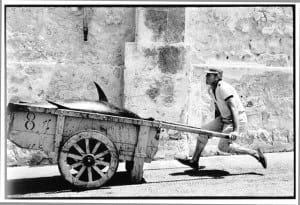 The Italians, photographs by the late Leonard Freed

Garrison Art Center (GAC) will launch the 2012 exhibition series with two exciting shows: The Italians, photographs by the late Leonard Freed, long-time resident of Garrison and recent paintings by contemporary artist Janet Lage. The public is invited to the reception on Jan. 14, from 6 to 8 p.m.

Early in his career photographer Leonard Freed developed a reputation for his sometimes wrenching, sometimes tender, but always edgy presentation of human moments. Also early in his career, at about the same time he met his wife Brigitte, Leonard began his love story with the Italians. Both love stories would last for a half century, until his death in 2006.

In 1952, the young Freed set out to travel through postwar Europe and begin his career as a painter. At the suggestion of a friend he began to take pictures, and in 1954 he sold his first photograph to a newspaper in Amsterdam and everything changed. The decades were interspersed with nearly continuous travel, numerous photojournalist commissions, fine art exhibitions and more than 20 photography books. Freed’s work is included in the collections of major museums around the world. At the time of his death, Freed had created more than a million negatives and thousands of prints.

In 1975, Leonard and Brigitte moved to Garrison, and became active members of the community. Garrison Art Center’s exhibition The Italians is made possible through the generosity of Brigitte Freed and daughter Susannah Freed.

Janet Lage lives in the New York metropolitan area with a base studio in Lyme, Conn. She travels to the West Indies yearly and paints in her Ocho Rios Jamaica studio. In 2010, she was awarded a Connecticut Artist Fellowship Award for painting. Her work is represented in numerous private and corporate collections. Lage has received multiple awards from competitions juried by senior curators from MoMA, the Guggenheim, the Whitney Museum of American Art and other national museums.