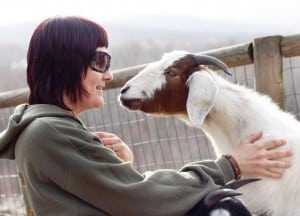 Canavan and a Shepherd's View goat

Many people say they love animals. For most that translates into having a pet. For others it may simply be an abstract notion. For Heather Howard Canavan, “loving animals” is a profound and lifelong commitment – one that is anything but abstract. Canavan runs Shepherd View Animal Sanctuary Inc., just outside of Cold Spring. There, she provides what she calls a “forever home” for animals that need to be rescued.

Shepherd’s View specializes in livestock – mainly goats, sheep and chickens to this point. But Caravan says she would not turn away a pot-bellied pig or even the odd ostrich if they needed a home. Just how do goats, sheep and chickens come to need rescuing? Canavan said part of the problem is people sometimes move here from the city and think it would be great fun to have a farm animal. Only after they get that goat or pot bellied pig do they realize how much work is involved in tending to it. She doesn’t have to go out looking for animals in need of help. “They come to me. They just find me somehow,” she said. “But I do go out and do live rescues sometimes.”

Canavan grew up in Calgary, Alberta and lists her mom as her number one animal- rescue hero. “She taught me how to take care of animals and to never turn away from an animal that needs help. She taught me to do the right thing,” she said. While her mom was a huge influence, there is another major factor that led her to adopt animal rescue as an integral part of her life. “I believe God put me here to do this. I’ve been doing this since I was very little,” she said. 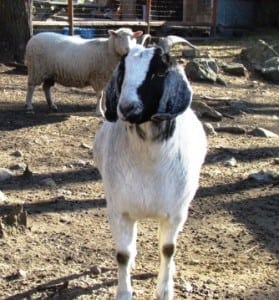 Sheep and goats enjoy some sunshine in their large, fenced in yard (photo by M.Turton)

Shepherd View Animal Sanctuary is a nonprofit organization and will soon be registered as a 501c3 charity. That status will enable supporters to receive a tax deduction for financial contributions. “I’ve been self-funded until now,” Canavan said. “I’ve used donation cans and have received donations of materials – things like food, hay and blankets. I’m also looking for volunteers to help with fencing and things like that.” Shepherd’s View has a board of directors that includes Canavan’s mom, Arlene Howard, veterinarian Peter Bach, local contractor Jimmy Splendido, Cold Spring resident Wendy Martin, and Vivian Fitzgerald, an animal rights advocate. Splendido is owner of Select Contracting LLC and his skills have put to good use at the site. “He has been a great help with things like barns and fencing,” Canavan said.

Currently the site has a small barn and fenced area for goats and sheep and four more livestock “day lots” planned. Also in the works are kennels to house up to four dogs, though Canavan is careful to point out that livestock is the sanctuary’s focus. She said that while she would even take in miniature horses, there are limits to what animals the sanctuary can handle. “We won’t take in full-sized horses or camels. We also don’t take birds. We take in animals at our discretion and when we’re full – we’re full.”

When it comes to food, Shepherd’s View sanctuary’s residents have nothing to complain about. “I get hay from Middletown and grain from Millbrook. Strictly organic. I like to feed them the best,” Canavan said. Canavan’s home is not just her home. She shares it with six dogs and four cats. And at night, in march the chickens – to keep them safe from predators. Canavan is self taught, having had no formal training. “I consider myself a dog whisperer. They just know. They listen to me. My pit bull gets along great with the chickens!” she said. Canavan could not resist the dog, Champ, who now counts chickens among his best friends. “He was hit by a train – I think someone dumped him off on the tracks,” she said. Badly injured, Champ required surgery and while he has recovered from his physical wounds, Canavan said the trauma from the incident injured the dog psychologically. “He is too damaged to go to another home,” she said. While Champ will have a “forever home” with Canavan, she does sometimes adopt animals out. “If I can find a great home for, say a pot-bellied pig, I will. Otherwise they’re here forever.” 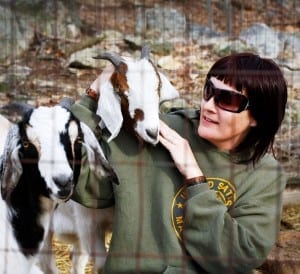 People need to make good choices
Asked if she thought animal abuse is common in this area, Canavan was pensive. “I don’t know. I’m not a mouse in the corner,” she said. “I think neglect is common. People are struggling economically right now. It’s not a pretty scene.” She also said people’s choice of pet is not always in the best interests of the animal. “People come here from the city and they tend to get a Labrador. They need room to roam. Get a Chihuahua.” She also said that people need to think about how much time they have available to spend with their pets. “A lot of people commute more than an hour each way – that’s a lot of time (for pets to be left alone). Dogs need companionship. They’re pack animals,” she said.

Asked if she could educate the public about taking better care of animals what her three most basic lessons would be she did not hesitate. “Never turn a blind eye to a situation you can do something about. Never give an animal as a gift. Always get your pets neutered or spayed.” Canavan’s day job could not be further removed from the world of animal rescue. For the past 20 years she has been a hair and makeup artist for television celebrities. She also operates Baby Breath Bridal Services, doing hair and makeup for weddings. She is planning a “spring launch party” to officially open the sanctuary, which she established about a year ago. The day-long celebration will include live music, food, refreshments and children’s programs. The date has not been determined yet.

Inquiries can be sent by mail to: Shepherd View Animal Sanctuary Inc. 61 Torchia Road, Cold Spring, NY 10516. A website and email will be established soon.
Photos by Rudolf Van Dommele, except as noted.