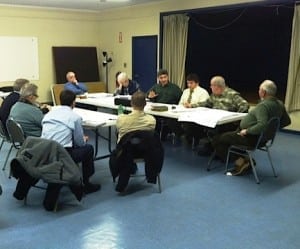 Foodtown could get even larger

A permanent and perhaps more palatable solution to keeping the post office in Cold Spring has appeared on the horizon, although it may take a pace a snail would mock to get to the finish line. Cold Spring Planning Board Chairman Joseph Barbaro reported last Tuesday, Jan. 10, that a U.S. Postal Service official had expressed interest in the idea of the post office moving into the proposed Butterfield complex across Chestnut Street from its current location. Barbaro said he had arranged to send James Hickey, a regional postal real estate official, a copy of the latest site plans for Butterfield. At a previous meeting Butterfield developer Paul Guillaro’s architect had said his firm was well acquainted with post office requirements.

Barbaro stressed that postal officials would have to review the Butterfield plans and  seek discussions with Guillaro before anything certain were known. He also emphasized that the Butterfield proposal, with its mix of commercial, residential and governmental uses, is a more complicated application involving many  agencies besides the Planning Board. Barbaro also introduced one big caveat. “Hickey was adamant that he is not interested in moving twice—they will only consider moving from where they are to where they are going, no interim steps, such as use of trailers,” said Barbaro.

Still, Barbaro expressed an indirect optimism by pointing out that the current Foodtown Plaza application, which includes a new post office building, would change if the Butterfield plan goes forward. Speaking to both developer Gus Serroukas and Foodtown President Dan Katz, Barbaro said a Butterfield solution would mean a new application from Katz (replacing Serroukas) for “change of use” in enlarging the supermarket. He underscored the potential advantage to Katz in the utilization of the planned postal space for an even larger supermarket while at the same time reminding Katz of the need for an open-ended lease for the post office while the other plan materializes. “We need each other. The post office needs a lease to stay where they are and you need the Planning Board to approve a change of use. It’s kind of like we’re married,” said Barbaro.

Katz, who sub-leases to the post office, was visibly pained at the prospect of a long and uncertain wait to expand his store. Nonetheless he informed the board he had already worked out an extension of the existing lease until August 2012. He offered no objection or comment regarding a longer period. Instead he emphasized how he was looking forward to providing the village with a much-improved supermarket. [SEE VIDEO]

Despite the appearance of a solution, Planning Board members spent considerable time discussing the appropriate way to proceed with their deliberations since the Foodtown Plaza application is officially before them and the Butterfield plan has yet to be filed. They ultimately concluded they had to continue addressing the details of the Foodtown plan until or if events made it no longer relevant. Many of the issues involved (traffic flow, parking spaces, curb cuts, storm water run-off) will still be involved either way.

Toward the end of a long session at the VFW Post on Kemble Avenue, Barbaro extended a special invitation to the nascent Marion Avenue-area neighborhood association to make a 15-minute presentation at the next Planning Board workshop on Foodtown, yet to be scheduled. Typically the public does not speak at workshop meetings but the residents have been persistent in their criticism and eagerness to participate in the planning review earlier than a public hearing.  “It’s ridiculous we can’t speak,” said Janice Hogan, a frequent attendee.

“Please prepare your comments. Let’s not have the usual litany of complaints, but rather positive comments. Answer the question: ‘Do you want the post office to remain in Cold Spring?’ And assuming this application goes forward, make suggestions to make it more workable,” requested Barbaro.