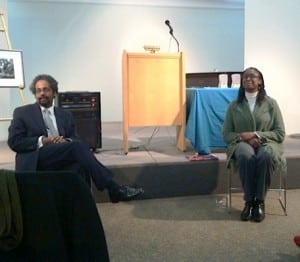 The celebration of Dr. Martin Luther King’s birthday can take many forms. The traditional way is to reflect upon and honor the man’s inspiring rhetoric, real-world accomplishments and lasting historic legacy. Another approach, taken by the Desmond-Fish Library in Garrison, is to focus instead on aspects of the historic struggle for civil rights, which of course encompasses the efforts, sacrifices and heroism of many thousands of people since the country’s founding. In this way King’s particular historic contribution is broadened and deepened through recognition of those who went before him, those who stood with him and those who have followed.

On Sunday, Jan.15,the library held its 16th annual MLK forum recruiting two scholars from Vassar College to present segments from their current work, which involves unearthing singular historic aspects of the African-American experience in the quest for lawful equality, economic empowerment and cultural status.  Drs. Quincy Mills and Sarita Gregory, assistant professors of history and political science, respectively, each introduced their audience to black individuals who made hard, bold choices that must seen in the context of their times to be fully appreciated. And appreciation includes embracing the complexity and often counter-intuitive directions taken by these people.

A Poughkeepsie Barber Cuts Against the Grain

Uriah Boston found business success in mid-19th century Poughkeepsie through his barbershop. But that success came at the high price of a tough choice.  Boston, a black man, did not serve black customers just like most of his fellow successful black barbers across the north and even more so in the country’s south. “White patrons did not want to be shaved next to a black man being shaved, that spoke too much of social equality,” said Mills, who spoke first at the forum. “These barbers chose economic incentives over social solidarity.”

Mills, author of a forthcoming book, Shaving Men, Grooming Race: A History of Black Barbers and Barber Shops, asserted that white people generally considered barbering, especially the intimate act of shaving, as a servile, unskilled act, notwithstanding the dexterity required to run a straight razor smoothly across a face. Despite the success men like Boston found in providing the service, they faced business challenges, particularly in the urban north where waves of European immigrants were willing to become barbers to get ahead in their new country. And the black barbers also confronted attitudes from black organizations and civil rights leaders, such as Frederick Douglass, who, in promoting advancement for African-Americans, sought to discourage blacks from engaging in “degrading work” such as barbering.  The barbers received condemnation for “being unmanly in refusing to treat black customers on an equal basis with whites,” said Mills.

Uriah Boston did not limit his endeavors to business. He was active in several organizations committed to the abolition of slavery and voting rights for blacks. But he and other barbers took great umbrage at the attitude of blacks that looked down on their profession, which they argued, represented a significant number of the same black middle class others desired to enhance.  Boston, Mills reported, wrote letters to Douglass’ Rochester, N.Y. -based paper wherein he argued that barbering “was not a degrading and servile profession but rather a very respectable business with many intelligent businessmen.”

Even though he participated in such organizations, Boston went on to argue later that he did not believe the ultimate success of blacks in America would come from a separatist movement that sought a “nation within a nation” as Douglass and others advocated, but rather from recognition by all of a common American citizenship. Such a divergence of views among African-Americans would carry well into the 20th-century when, Mills pointed out, Dr. King opined on the same issues, siding mostly with Uriah Boston on the dignity of all work and the need for a coming together of the races. 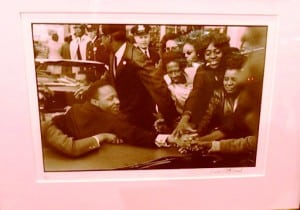 Photo of Dr. Martin Luther King Jr. that hangs in the Desmond-Fish Library

One Teacher Playing a Different Melody

Nancy DuPree, according to Sarita Gregory, was a public school music teacher who was ultimately thrown out of work because she brought her own personal style to the pedagogy of her classroom, filled with young black students in the 1960s in Rochester, N.Y. A southern black woman who believed mistakenly that the northern Unites States constituted a place free of southern racism, DuPree found herself in Rochester in 1964 just before a riot broke out after a young black man’s arrest and beating by the police in the aftermath of a dance performance. Assigned to a school with mostly white teachers and administrators, DuPree at first thought teaching music to elementary school children would be, according to Gregory, “breezy, uncomplicated, even boring.” But DuPree found her young charges “strong-willed, outspoken, aggressive and determined” and not appreciative of the music material the school expected Dupree to teach. She soon found herself working with the children to rewrite songs with more relevant lyrics, eventually writing songs of their own and in the process “turning their resistance to curiosity.”

During her lecture Gregory played three recordings of DuPree’s students singing songs on which she collaborated with them, which were later captured on Ghetto Reality, a Smithsonian Folkways recording. In each there is a simple but powerful message of cultural relevance, personal and social empowerment and the need for resilience in the face of adversity.

In What Do I Have? Gregory said DuPree “taught her students the value of what gifts they had and not to focus on the deficits of school and home and to find strength within history and cultural roots.” James Brown, a song about the then very popular soul singer and bandleader, “takes a representative man they idolized and makes him more accessible and more human to them.” With lines such as “Born in Augusta, Georgia/A poor little shoeshine boy/Now he’s the King of Soul, “said Gregory, “the song taught a possible path out of poverty by embracing who they were and where they come from and adding confidence, ingenuity and dedication to whatever they would apply themselves to.”

DuPree, according to Gregory, made a point of inviting black musicians and celebrities appearing in Rochester to visit her classroom. Among those her students met were B.B. King and Mohammed Ali.  “Today with classes being taught on Jay-Z at Georgetown, DuPree might not seem innovative. Given the time, location and Rochester’s political and racial history, I thought her pedagogy path- breaking,” said Gregory.

The song Gregory played last had a direct connection to the King holiday: a haunting tune, written by DuPree, during which the students sing about the killing of King on April 4, 1968. “They murdered him/They murdered him” is the song’s direct and painful opening. In a later stanza, “You can murder the man/But you cannot murder dreams” offers hope for the future despite the darkness of the historical moment. “Dupree brought civil rights into her classroom and enabled her students to trust their own reactions to King’s assassination.  She allowed them to express their anger, disappointment and frustration over King’s death while raising their precious hopes for their own future,” said Gregory.

DuPree’s teaching career ended with the release of the aforementioned album, which displayed publicly what she had been doing in her classroom. Fired officially for “refusing to wear high-heeled shoes,” DuPree had to watch as her elementary-school charges gathered in protest at the entrance to the school, only to have the school authorities call the police to disperse them. She never taught again but continued working as a published writer/poet and community organizer.

“By focusing on the work she did in her ‘secluded garden’ in Rochester, N.Y., in the 1960s I hope to show Dupree was a freedom fighter in her own right,” said Gregory who is working toward a book focused on DuPree entitled Improvising Politics: Black Women’s Activism in an Age of Democratic Disappointment.  “She encouraged her students to improvise, to make their ghetto reality the center of their gaze and analysis, rather than have them sing in muted voices,” said Gregory.