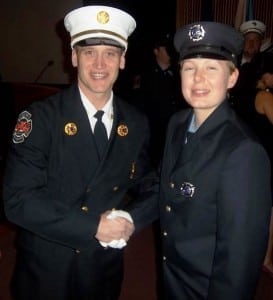 Meet Dana Gulley – Garrison resident, environmental advocate, firefighter – and an energized, straightforward young woman who knows the value of community and who practices what she preaches when it comes to getting involved in home town life.  Last August, 23 year-old Gulley joined the Garrison Volunteer Fire Company (GVFC). “I volunteered for a couple of reasons. They say it ‘takes a village’ and that really was the case for me,” she said.  “Growing up in Garrison, I had support from a lot of people, including John Svirsky and Peter Von Bergen and others in the Fire Company. Being raised that way, there was always the mantra of ‘pay it forward.’ I’m not in a position to help people financially – but I can get out there and serve my community. ”

She sees GVFC as vital to the community – and not just in terms of fighting fires. “When I think about Garrison, the Fire Company is probably the best example of a community gathering space where you can get out and meet people. I wanted to be a part of that,” she said. Gulley recently completed the required 86 hours of “Firefighter 1” training, qualifying her as an interior firefighter. Until they receive that training, new recruits are limited to assisting with exterior duties at the scene of a fire. One of four female firefighters with GVFC, she says the welcome she received from her male colleagues was completely good natured. “At one time fire companies may have been a ‘good old boys’ [situation] but at Garrison, if you’re showing up and you’re taking it seriously, it’s ‘We’re grateful and we can put you to work.’ ”

Being a firefighter is physically and emotionally taxing. That stress makes heart attack the number one killer of firefighters – whether paid or volunteer. As a result, physical fitness is paramount and explains why fitness rooms and fitness equipment are an integral part of any well-equipped fire company. “I was physically fit enough when I started,” Gulley said. “But I definitely got stronger as I went through training. It was pretty interesting to see that happen.” She said that every time a firefighter is killed on the job anywhere in the U.S., the incident is studied by GVFC members. “We try to learn from it,” she’s said. 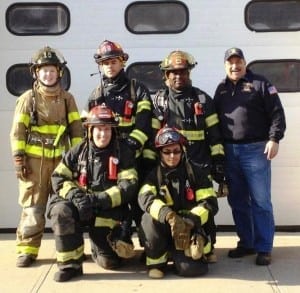 Gulley (L) with members of her graduating class

Gulley takes her duties as a firefighter very seriously. “I had a real clarifying moment a while ago,” she said, describing an incident that took place just after she completed her Firefighter 1 training – and illustrated the need to always be on top of her game. “I was driving home from work and got a call to a structure fire.” She went straight to the Garrison Fire Company on Route 9. Fire fighting equipment is not permitted to leave the fire hall unless it is manned to a minimum standard. In this case, Gulley was the straw that saved the camel’s back. Had she not gotten to the fire hall – the engine could not have answered the call. “I said to myself, ‘This is it. This is the real deal.'” Gulley says that with so many calls in which firefighters are called back due to false alarms and the like, that call to a structure fire taught her a valuable lesson. “The point for me was I realized that every time you respond, you have to be 100 percent ready, 100 percent mentally prepared.” In this case, a kitchen fire was put out, avoiding what could have been a very serious fire. “Two minutes can make all the difference,” she said.

Training is arduous at times, but Gulley seems to relish it. “I want to get as much training as possible. There’s nothing I learn at the Fire Company that isn’t applicable to everyday life.” And for her, everyday life always comes back to helping her community. “I think that today, in this economy and with the desperation that people are feeling, public service is the most important thing you can do,” she said.

In 2010, Gulley graduated with a Bachelor of Science in Environmental Studies from the University of Vermont’s Rubenstein School of Environment and Natural Resources.  While in college she interned with Vermont Senator Patrick Leahy and at the Pataki-Cahill Group, an environmental consulting firm in Manhattan. After graduating, she was one of six students nationwide to earn a Unilever National Park Congressional Internship which enabled her to work at Ellis Island and the Statue of Liberty National Monument.  She also interned on Capitol Hill with California Congresswoman Grace Napolitano.

Gulley is the outreach and development coordinator for Riverkeeper, the Ossining-based non-profit organization dedicated to the protection of the Hudson River and its tributaries. Her duties include membership building and management of the organization’s volunteer and internship programs. She plans on attending law school in environmental or public service law in the fall of 2013.

Her background in member recruitment at Riverkeeper and the political experience she gained through several internships are evident when Gulley speaks about GVFC. “People need to know we always need volunteers – men, women, all ages.” She stressed that volunteers don’t all have to become interior firefighters, that there are many other roles to be filled as well. “And people should know that a volunteer company costs tax payers about one eighth of what a full time department costs,” Gulley said.