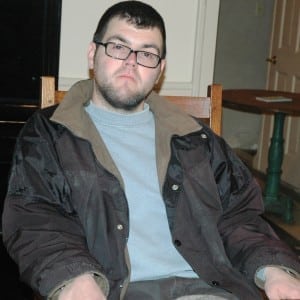 Lifelong Cold Spring resident Charles E. Hustis III last week launched his campaign for re-election as a village trustee, unveiling a four-plank platform that focuses on wise fiscal and traffic management and building ties in the community. “I like going out and talking to people and helping people,” said Hustis, 28, in an interview on Friday, Jan. 13, with Philipstown.info. “That was the drive when I ran in 2010 and I would like to continue to be a voice of reason and a youthful presence on the board. I’ve enjoyed being able to help people and I‘ve learned a lot from listening to my fellow [Village] Board members” — Mayor Seth Gallagher and Trustees Bruce Campbell, J. Ralph Falloon, and Airinhos Serradas. Hearing one another out, “helps to shape your opinion,” he explained. “It’s good to have a little diversity. When you have a nice healthy debate you get the true solution and I think that means a lot to people.”

Outlining his platform, he began with finances. “I’m big on revenue and trying to generate revenue in the village. I’d like to resurrect the discussion on municipal [parking] meters” as a source of income. Cold Spring needs “new and innovative ways of revenue generation,” Hustis said.

Secondly, he said, “I want to see better communication with senior citizens,” perhaps through appointment of a liaison from the senior community, someone who could report regularly to the Village Board on seniors’ concerns.

A third priority is continuing his efforts in “updating vehicle and traffic laws.” At present, he said, there’s “a lack of a bridge between what the written law is and adequate signage on streets.”

Finally, he said, he wants begin making village buildings more energy efficient and “going green,” both to save the environment and to cut expenses. “There’s no reason we can’t save money” on infrastructure, he said. A member of the Village Board’s audit committee, he sees bills for such items as street lights. On average, it costs $3,500 to $4,000 per month just for the lights on Main Street, Hustis said. “Electrical costs are outrageous in the village.”

Asked about his accomplishments in his first two-year term, he answered that “I just keep watching things … questioning” and have helped keep costs down while assisting with the tasks of the Village Board in any way possible. He observed that an elected official’s first term is often considered a learning experience. Although his knowledge has increased as he listens to his colleagues, he said, “I don’t like the fighting on the board at times. My philosophy is that if you want the true solution for the benefit of all people, all parties have to come together and iron out your differences. I don’t like mud-slinging” on the campaign trail, either, he added. “It turns a lot of people off.” He said he likewise sees some troubling friction within the village itself. “The unfortunate thing that happened in this town is it’s become so polarized. I’d like to do what I can to help heal some of the divisions in this village.”

Known as “Chuck,” Hustis said he named his electoral ticket (with him as sole candidate) the Chuckles Party because “you have to laugh at something.” An associate member of Cold Spring Fire Company No. 1, active member of the Lions Club, and parishioner at St. Mary’s Episcopal Church, Hustis joked that “the many faces of Chuck” include that of a “reindeer” at the annual Cold Spring Christmas tree lighting ceremony.

Employed by the Foodtown grocery in Cold Spring, Hustis graduated in 2006 from St. Thomas Aquinas College, Sparkill, N.Y., with a bachelor’s degree in natural science. Currently, he said, he is studying online to earn credentials as a high school mathematics teacher, with the goal of joining the faculty at Haldane High School.
Photo by L.S.Armstrong