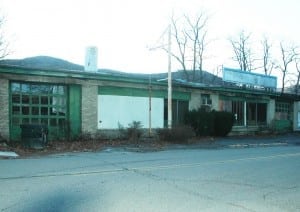 New York State’s Department of Environmental Conservation (DEC) has filed a complaint against the owner of the former Impellittiere Motors car dealership in Cold Spring, with action pending in the village’s Justice Court.

The DEC complaint alleges that the gasoline tanks at 37 Fair St., were “not closed permanently,” in violation of N. Y. State Codes, Rules, and Regulations provisions governing storage of petroleum.

In response, R.T. Impellittiere filed a written plea of “not guilty.” Impellittiere, who lives down the street from the former dealership-cum-garage, did not return a phone call requesting comments on the case.  Justice Thomas J. Costello said the case is likely to be heard as soon as the court can set a date that allows DEC attendance.

The state requirements at stake deal with “closure of tanks permanently out of service” and demand removal of liquid and sludge, disposal of any waste products in accordance with applicable state and federal stipulations, action to ensure tanks are “rendered  free of petroleum vapors,” and the dismantling and removal, or capping and plugging, of connection lines.

The state also says that underground tanks “must either be filled to capacity with a solid inert material (such as sand or concrete slurry) or removed.” 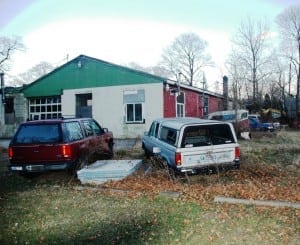 The back of the dealership

For two years, the dealership, sometimes referred to as a possession of a firm called IMP Realty, has drawn the interest of Cold Spring Building Inspector William C. Bujarski, who brought it to the attention of the Village Board shortly after taking up his job.

In his report to the board for January 2010, he stated that the property contained “numerous violations” of village laws, “including junk vehicles, property maintenance, fuel tanks, etc. There are building issues, there are fire issues, and there are maintenance issues,” plus the encroachment of junk onto village property, he said at the time. “Right now we’re just looking at it from a standpoint of working as friendly as possible, to resolve it. That’s our goal.” However, a resolution proved elusive.

Bujarski’s updates in 2010 and 2011 continued to list the dealership as a problem. For example, in May 2010, he informed the board that some old dealership vehicles that had been parked entirely or partly on village property had been removed “but there’s still issues there.” The dealership lies between Fair Street and the Village Garage grounds to the west. 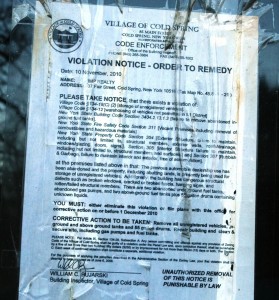 The November 2010 notice from the village

In November 2010, the village issued a “violation notice-order to remedy,” claiming violations of the village law code in regard to “storage of unregistered vehicles, warehousing of vehicles, not permitted in [the] district; [and] failure to remove abandoned in-ground fuel tanks,” as well as violations of the New York State Fire Safety Code regarding “vacant premises, including removal of combustibles and hazardous materials.”

The notice likewise alleged that “the building has dangerous structural defects, such as broken windows, cracked or broken fascia, hanging signs, and rotten-failed structural members.” Last August, Bujarski told the Village Board that in “the ongoing saga of 37 Fair St.,” someone had begun repairs to the building, but halted after about three weeks.

In his latest report, delivered in January to cover the period December 2011, he stated that the DEC had been notified and the owner served with legal papers. “We have not made sufficient progress in two years,” Bujarski told Philipstown.info Jan. 5. “We’re looking at it as being in the best interest and safety of the village” to address the matter.

Janet Rust, who lives in the house just north of the dealership, recalled on Wednesday, Jan. 18, that her father, Fred Selleck, opened the original garage in 1911. She said that after returning from service in France in World War I, he built an upgraded establishment, the core of the structure still standing, selling cars and dispensing Flying A gasoline from green pumps outside.

He sold Chevrolets and later, Dodges and Plymouths until the 1950s, when Ray Impellittiere, who had been running a dealership on Main Street, bought the property, Rust added. When Impellittiere Motors discontinued business is not clear, though it appears to have been shut by 1997. 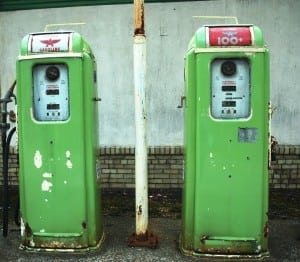 An ad in the 1955 Nelsonville centennial anniversary booklet described Ray Impellittiere Motors Inc., as “your friendly Ford dealer.” Years after the dealership closed, the green Flying A gas pumps remained popular local icons –- until the day in November 2010 they mysteriously disappeared.

“If only they had kept the pumps and gotten rid of the slowly decomposing eye-sore of a building behind them!” one resident commented. A year later, the pumps turned up at the home of a Flying A fan on Long Island.

One thought on “DEC Brings Court Action over Defunct Garage”