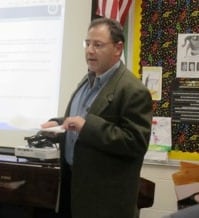 Outgoing Board President Joe Curto describes what a board member does

Figuring that an audience full of involved parents was the perfect pool to drop a catch-a-board-candidate net into, Haldane School Board members Joe Curto and Gillian Thorpe spoke to the well-attended after-school PTA meeting on Jan.19, providing an overview of the board and the type of individual who should consider joining them. Curto, the board president, and Thorpe, vice-president, both stressed how much they had learned both professionally and personally, from their tenure on the board. Both mentioned how they were able to apply strategies learned from their roles as trustees to their “real” working lives. Curto, who will not be running again when his term ends in May, began his overview with a quote gleaned from the Westchester/Putnam School Boards Association:

School Board members are elected local officials who volunteer to be part of a board that oversees and sets policy for a public school district’s affairs, personnel, finances and properties. Local control of school districts is the foundation of school governances. A well-functioning school board is an example of democracy in action.

“These two sentences describe everything that’s in our 500-page manual,” said Curto.

Curto then listed the board’s priorities as, “number one, hire a superintendent — we hit a home run with Dr. Villanti; set and monitor a budget; oversee facilities; oversee the district plan; get involved with policy.”  Curto then stated the need to immediately fill one seat left vacant through Dave Merandy’s resignation, instead of waiting until the May election because of the difficulties in reaching a viable vote with only 4 members, should one be unable to attend. Out of a variety of options, the Board chose the one for which “the law is clear — three of four of us can appoint” someone who will then officially run for election in May and fulfill the 3-year board member term if chosen by public vote.

Letters of intent from candidates, along with a personal bio, are to be submitted to the district clerk no later than 5 p.m. on Monday, Jan. 23. It is hoped that interviews will take place on Thursday, Jan. 26.  Curto admitted that “right now our pool of applications is pretty shallow — there are no applications” but he called that “normal” and said that often someone steps up at the last minute. “We’re looking for energetic, enthusiastic people who care about Haldane.  Balanced, can think, willing to work, and care about the district.”

In brief remarks, Thorpe, who has been on the board for two years now, said the “reason I ran [initially] was that I saw the good work and loved the direction the board was going in.  There comes a time, comes a need and if you have the skills … Now we’re turning over, looking for skills and different perspectives.”

Curto added, for those quaking in fear at the thought of the commitment becoming a Board Member entails, “There’s a perception that anyone on the board can’t go to Foodtown, or a bar.  That’s not the case; a lot of people appreciate that we volunteer our time.  It’s not as crazy as it used to be. It’s a great opportunity for people to become part of a solution.” 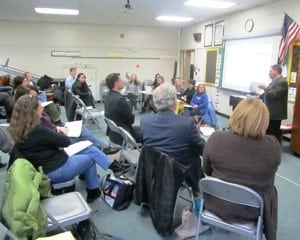 A filled room of attendees at the PTA meeting last Thursday

The meeting then shifted to the soon to be launched ATLAS curriculum mapping, a software system designed to help facilitate greater communication between teachers and parents in tracking what units of study will be taught when, and, within those units, what skills will be taught. Calling the five-years-in-the-making effort to input all of the start-up information “massive,” Elementary/Middle School Assistant Principal Julia Sniffen praised all of the teachers who “worked on it at night, during prep times” to get the labor intensive data thoughtfully inputted into the system.

Using projections, Sniffen then demonstrated the program, its navigation and its capabilities on what is a “live document, changing daily.”  The curriculum mapping gives an overview, in the form of a timeline, of the units of study from kindergarten through to upper level high school Advanced Placement classes.  Using second grade math as an example, Sniffen showed how the various fields of study within math were mapped out through the course of the year, and how each field could then be clicked on to reveal the skills to be acquired and many other components, added by each teacher, including standards, links and much more. The teachers work collaboratively in establishing a collective curriculum for the year, although each may have his or her own method of presentation of a specific unit. The skills are further broken down into “developing,” meaning students are not expected to completely know it yet, and “secure,” which indicates mastery.

An attendee asked how parents would use it. Sniffen replied “at the beginning of the school year it can give a heads up on what is coming.  It can help track areas a child is doing well in or not. As they progress through high school, there are many more choices in classes and this can give specific details on them — more than the current course catalogue.” Haldane Elementary/Middle School Principal Brent Harrington added that it would become even more valuable as the curriculum changes as a way of staying on top of things.

Also mentioned, by PTA member Karen Kapoor, was Friday’s three-hour after school “Giant Lego Build,” a PTA-sponsored activity which attracted 60 sign-ups at $20 per child. With no cost to produce the event, it was projected to raise about $1,200 for the PTA from one event. Reports were also given on the creation of a bullying committee; the status of the spring after-school enrichment programming; current PTA membership stats; the formation of a PTA nominating committee; and the genesis of a committee which would explore learning issues, differential learning in classrooms and “ways we can add or offer to the school and also learn from what’s being done in the classroom to bring about change in a positive way.”  Mention was also made of future assemblies, the Reflections program and the re-scheduling of the popular activity, The Brain Show to the last Friday in April.  The next PTA meeting will take place on Feb. 16 at 7 p.m. and will address the budget, taxes and unfunded mandates.
Photos by A.Rooney

One thought on “School Board Candidates Sought at PTA”