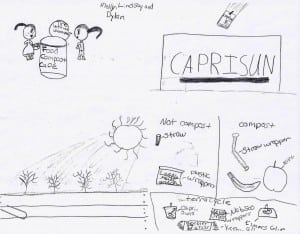 A diagram sent with the students’ letter gives composting tips.

Dear Mr. Mayor: Save the Planet!

Three Haldane Elementary School students want to save the planet from global warming – and enlist Cold Spring Mayor Seth Gallagher to help them. The third- and fourth-graders, identifying themselves only as “Molly, Dylan, and Lindsay” made their pitch in a letter he read at the Village Board meeting, Jan. 10. “Global warming is real and it’s here to stay – unless we do something to stop it,” the young advocates stated in their hand-printed missive on lined notebook paper. They asked the mayor to endorse a national initiative against climate change.

There is an amazing agreement that more than 400 of your fellow mayors have signed,” they explained. “It’s called U.S. mayor’s climate protection. It’s a 12-step program that sets responsible goals for your town/city to reduce carbon dioxide emmissions (sic) to below what the levels were in the 1990s. Please join these other mayors and being leaders in the fight to stop global warming. The kids of the world are depending on you.

Gallagher expressed his delight at their gumption. “I was just very impressed with this,” he said at the board meeting. Global warming “is like the issue everybody wants to avoid and they’re drawing our attention to it.” He said the nation-wide mayors’ campaign to which the students referred is part of a worldwide movement and that he would provide more information to the Village Board in the near future. “I think it’s something we should sign onto,” he said. “It’s an important issue.”

The U.S. Conference of Mayors established the Mayors Climate Protection Center and Mayors Climate Protection Agreement to support the international anti-global-warming Kyoto Protocol of 2005. By early this year, 1,055 U.S. mayors had signed the agreement, according to the Conference of Mayors.  “Scientific evidence and consensus continue to strengthen the idea that climate disruption is an urgent threat to the environmental and economic health of our communities,” the organization stated in a background summary. “Many cities, in this country and abroad, already have strong local policies and programs in place to reduce global warming pollution, but more action is needed at the local, state, and federal levels to meet the challenge.” The mayors’ agreement calls on communities to take a variety of steps, such as adopting anti-sprawl policies, sponsoring urban forest restoration projects, and launching public information campaigns. It likewise encourages local leaders to urge state and federal governments to enact measures “to meet or beat the greenhouse-gas emission reduction target suggested for the United States in the Kyoto Protocol, a 7 percent reduction from 1990 levels by 2012,” and urges the U.S. Congress to pass bipartisan greenhouse-gas reduction legislation.

Along with asking the mayor to jump on the national bandwagon, the students related some of their own efforts at Haldane. “In our school we are composting our lunch. Our classes take the compost bucket out to our school garden and dump it in our compost pile,” they wrote. “This helps because we are not taking up space in landfills.” They sent a picture diagram as well and said their classrooms were “4 Lemon, 4 Hartford, and 3 Dudar.” Haldane faculty members Silvia LeMon and Michelle Hartford teach fourth grade and Simon Dudar teaches third.

Gallagher has promoted composting in the village, making compost bins available through the village office to residents at a nominal cost. “Some of the actions they’re looking for are things we’re doing already,” he said.

The students also invited him to Haldane’s third annual fair in May “so you can learn ways to help the environment.” Gallagher said he intends to attend the event and proposed the village might play a part in it, too. Meanwhile, he promised to formally answer the youngsters’ letter.

One thought on “Kids Urge Action on Global Warming”