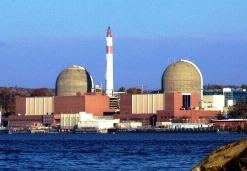 Entergy, which owns and operates the Indian Point nuclear power plant in Buchanan, is proposing to build a 20,000 square foot Emergency Operations Center on Horsemen’s Trail just off of Route 9 near the Putnam-Dutchess County line. Don Mayer, senior manager of the project, told Philipstown Planning Board members at the Jan. 19 meeting that the building, “will basically be an office,” to be used “in the unlikely event of an emergency at the plant.” He said that the building will house computers and communication equipment, enabling it to function as a command and control center but that it will not serve as an evacuation center. Mayer said the building will also be used for training, hosting about four drills a year as well as one exercise conducted by the Federal Emergency Management Agency (FEMA).  Otherwise the building will be a “lights out facility” and will sit empty most of the year.

Mayer said that other locations were considered but that Horsemen’s Trail was thought most suitable due to its location – both in terms of  travel time from Indian Point and because many of Entergy’s employees live north of Buchanan. The facility will include 180 parking spaces. When asked why such a large parking lot is required Mayer said that drills usually involve up to 50 staff and sometimes include a shift change. He said parking would also be needed for media. The property will not be signed, fenced or gated but will employ surveillance cameras.  No action was taken by the Planning Board. The proponents will come back with revised plans to include improved vegetative screening of the building and other measures to break up the visual appearance of the building’s large facade.

The Entergy proposal is part of a subdivision plan proposed by Mary Ellen Finger, owner of the property. Finger serves on the Planning Board and recused herself from the discussion. The site currently has an approved plan of subdivision that incorporates five lots. The new proposal would reduce that to three lots – the Entergy facility, a farm lot and one residential lot. It is expected that the Planning Board will consider the proposal again at its February meeting and set a date for a public hearing at that time. 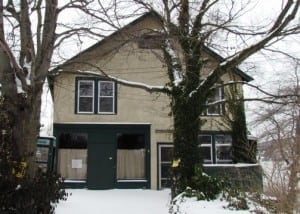 Tavern to move to Garrison’s Landing

Barring any last minute complications, a new restaurant will be soon be approved for the former Guinan’s Pub and Country Store at Garrison’s Landing. Glenn Watson of Badey and Watson Surveying and Engineering reviewed plans for the proposed development before the Planning Board. The restaurant, along with a retail space and two apartments, will bring back to life a building that has sat empty since Guinan’s closed its doors on Jan. 31, 2008.

Chip Allemann, manager of The Garrison and the Highlands Country Club told Philipstown.info that “Tavern,” the restaurant currently located at the country club, will move to Garrison Landing. Watson said that plans call for a studio apartment and a three bedroom apartment in the building’s upper level. The retail space will be small, catering mainly to commuters.

After Guinan’s closed three years ago, there was an attempt to have a cafe or similar business take over what had been a popular community gathering place for some 50 years. There was an outpouring of support for the idea at the time. Watson quoted Stephen Gaba, legal counsel for the Planning Board, as having said, “It was the only time I can recall the public coming out in support of a bar.” The attempt failed, however.  “None of the business plans made sense to the owner,” Watson said. Garrison Station Plaza, owners of the property, then brought forward a plan to convert the building to offices and apartments and had been working towards that end for more than a year. “Then lo and behold, a very respected restaurateur presented a plan that was acceptable to the owners,” Watson said, referring to Chris and Sharon Davis, owners of The Garrison and Highlands Country Club.

“We don’t plan any significant adjustment to the site plan,” Watson said. He said that the building’s footprint will remain the same and its familiar stucco exterior will be maintained as required by New York State Parks Recreation and Historic Preservation.  A “package treatment plant” will be installed to handle sewage and wastewater. Parking will be provided through an agreement with the Garrison’s Landing Association. Members of the Planning Board will tour the site on Feb. 5 with a public hearing to review the proposed development scheduled for Feb. 16 at the VFW Hall on Kemble Avenue in Cold Spring.

Watson also presented a plan on behalf of E. Polhemus Enterprises LLC for use of property on Horsemen’s Trail across from Mid Hudson Concrete as a depot for storage and processing of soil and gravel. A soil mine that operated on the site closed 30 years ago and Watson said no mining will be done as part of the proposed use.  A similar plan was submitted to the Planning Board two years ago but it included a new building and processing facility for wood materials. Both of those features have been removed from the current proposal. Watson said Polhemus was asking “for permission to continue a use that has been going on for a number of years.”  The depot would include storage bins for gravel and soil as well as four or five piles of material “about 15 feet high” along with a portable screening plant to grade and size materials. The berm along the road side of the property and the vegetation on it would both be enhanced to further screen activities on site. Watson said that drainage will be improved and that an onsite well would provide water for dust control.  Asked about noise levels Watson said, “I don’t expect it to be much different than now,” and that the increased size of the berm and added vegetation would both help deflect noise upwards.

Some residents in attendance raised a number of concerns however. Mickey Danaher lives on nearby Skyline Drive and questioned Watson about the number of trucks that would be entering and leaving the depot. Watson said that a worst case scenario might involve 42 trips a day in and out of the site, but that most days would see only one or two trips. He said that the site would operate from 7 a.m. until 6 p.m. Monday through Friday and 7 a.m. through 3 p.m. on Saturdays. Crushing would be limited to 9 a.m. to 3 p.m. on weekdays. Another nearby resident, Kelly Martin, had other worries. “I worry about my children…the school buses. It will be very dangerous,” she said. Watson said that he had, “…painted three scenarios, but I truly don’t believe that the worst case will happen often. It will not at all be typical. Once in a while? Yes.”  Martin was not convinced. “It will be tight for the school buses. It’s narrow road…a dangerous corner,” she said.

David Vickery, who lives on Horsemen’s Trail, had a very different view. “My observation is that the Polhemus operation is a good neighbor. I’ve never seen trucks go fast…they go cautiously,” he said. “I think they are very responsible. I’d like to see them be able to do what they want to do.” Nothing was voted upon at the meeting. The proposal will be considered further at the next meeting, including review of the complete Environmental Assessment Form.

A public hearing, also to be held on Feb. 16,  will consider plans for a 20,000 square-foot house proposed for 245 Avery Road in Garrison. Watson presented the plan on behalf of the property owner Nancy Olnick Spanu and said the residence will also be used to house the owner’s art collection. “This will not be a public site. It is not a museum,” he said of the proposed four bedroom home. The proposal entails readjustment of four parcels of land to allow construction of the new residence. One large residence already exists on the site. The owners have made application for a groundwater permit to facilitate diversion of storm water around the new house which lies within 100 feet of a wetland boundary.

Gerald Morris and his neighbor Roger Ailes, owner of the Putnam County News & Recorder, have submitted a plan of subdivision for three properties they share in Garrison. In the end, the proposed adjustment of lot lines would merge the three properties into two, with Ailes and Morris each owning adjacent, eight-acre parcels. Morris owns one of the three existing lots; Hudson Valley 2009, a trust established by Ailes, owns the second; and Viewsave LLC established jointly by Ailes and Morris owns the third. Watson, who presented the proposal, said he doesn’t anticipate that the lot line adjustments will result in any physical change to the properties, adding that the properties are steep and probably not suitable for building. Watson said he would check but that he believes that both parties will agree that nothing will be built on their respective lots. The Planning Board will tour the properties on Feb. 5 with a Public Hearing scheduled for Feb. 16.