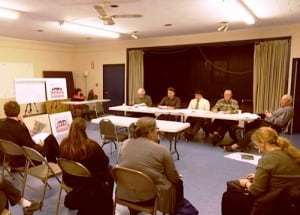 Paul Guillaro, far left, sits with his consultants and audience members before the Cold Spring Planning Board

Drawing increasing public interest, plans for the old Butterfield Hospital in Cold Spring dominated local government agendas this week as three boards within 24 hours discussed implications of locating a senior citizen housing complex and multi-government municipal headquarters at the approximately 5.75 acre site. The Cold Spring Village Board, the Cold Spring Planning Board, and the Philipstown Town board all considered aspects of the potentially controversial project.

Despite lingering issues, including questions about the merits of additional “senior” apartments in Cold Spring versus more commercial “ratables” to feed tax bases, the Cold Spring Village Board Jan. 24, endorsed owner Paul Guillaro’s concept for the site. Guillaro’s plans call for construction of both “affordable-rent” apartments  and pricier “market-rate” condominiums for older-age residents; a center for village, town and county governments; retail space that could house a post office, retention of the existing Carolyn Lahey Pavilion medical offices; and demolition of the old hospital structure to accommodate the new “campus.”

In a unanimous vote on Tuesday, the five-member Village Board authorized Mayor Seth Gallagher to send a letter of support to Guillaro, who had requested it and likewise appealed to the Town Board for a letter -– which the Philipstown Town Board, meeting the following night, agreed to supply. According to the village letter, Guillaro proposes to create the Butterfield Senior Apartments, 50 units for senior households earning 60 percent or less of the area’s median income, and to finance the project with the New York State Housing Finance Agency through housing bonds and tax credits.

Establishment of the government center and continuation of the medical services, alongside the moderate-income units, offers “an exciting, dynamic, mixed-use development, which will benefit the village of Cold Spring in many ways,” while the inclusion of pricier senior condos ensures “a mixed-income community, which is another solid planning goal,” Gallagher wrote. He added that the Village Board “looks forward to working with you and your development team to see the Butterfield Senior Apartments through the site-plan and building-approval process” and likewise welcomes the “economic benefits of the construction activity taking place in the village and the new senior residents who will buy goods and services in the village for many years to come.”

However, while supporting the plans for modest-income senior housing, at the board meeting the mayor acknowledged that “the downside is we don’t get as much taxes from that portion of the property. But then again from the full-market areas we would [get greater tax revenue]. So that’s something we’re going to have to work out, how the taxes are going to be arranged, and the municipal building as well. “

“It’s just something we really have to look at,” said Trustee Bruce Campbell, who reminded the board of resident concerns raised quietly to the board in recent days. These include uncertainty about the long-term viability of apartment developments for modest-income-seniors; such projects’ lack of contribution to taxes; the possibility the complex could end up housing families with children who burden schools and payers of property taxes, regardless of initial intent; and the possibility it could cost local governments money over time.

Furthermore, during a presentation by Guillaro to the Village Board on Dec. 6, Anne Impellizzeri, vice-chairperson of the Special Board for a Comprehensive Plan-Local Waterfront Revitalization Plan, observed that Cold Spring already has “a disproportionate number of senior citizens, almost 20 percent” of the total population, compared to about 10 percent for Putnam County as a whole. “This village sorely needs ratables,” she said. “We need commercial space to bring commercial tax revenue to our village, as opposed to residential.”

The mayor noted that “these questions tie in perfectly” with another aspect of the board’s Butterfield-related agenda Tuesday: a formal request that the Special Board prepare an analysis of the Butterfield project’s impact on taxation, demographics, traffic safety, and village character, and how it fits in with the pending Local Waterfront Revitalization Plan as well as with the Comprehensive Plan adopted by the Village Board earlier this month. “There are some outstanding issues that need to be addressed,” Gallagher said. The Special Board intends to complete the analysis by Feb. 23.

In a follow-up conversation on Jan. 25, the mayor said that for Guillaro one reason to push the apartments is that “he’d be able to build the senior units right now,” by obtaining a special permit, without a zoning change. Various other components of the plan would require a zoning change. However, the mayor reiterated, “we’re certainly interested in what the tax impact is going to be.”

The night after the Village Board met, the Philipstown Town Board renewed its ongoing consideration of the ins-and-outs of the Butterfield project. “I’m going to pre-empt this by saying I don’t have an agenda here,” Supervisor Richard Shea told his colleagues as the discussion began. He described the Butterfield project, and Town Board’s involvement, as still in the early stages, although Butterfield’s future has been discussed at Town Board meetings periodically for at least a year. In June 2011, the town government wrote a letter of intent expressing its desire to acquire space at Butterfield. So far, Shea said Wednesday, “there is no legal document” binding the government to moving and it could choose to stay put. Nevertheless, “we would like to sometime formally commit to taking space there,” he explained.

The town government now operates out of the quaint but cramped 145-year-old Town Hall on Main Street, on the border between the villages of Cold Spring and Nelsonville. Accessible only by stairs, the main meeting chamber on the second floor retains its 19th-century windows and vestiges of its original design, but has been carved up to provide sub-offices for the town Justice Court, with a lowered ceiling and annoying acoustics. Downstairs, departments jumble together, with no room for Town Board member desks, small conferences, secure record storage, or other typical office needs –- as Town Board members pointed out Wednesday evening. Nor is the building, especially the meeting hall, sufficiently handicapped-accessible, as demanded by federal law. The place also needs better “insulation, windows, wiring” and much more, Supervisor Richard Shea told his colleagues.

As he has in the past, Shea described the planned Butterfield inter-governmental building as “an opportunity” to get an updated headquarters as well as provide a senior-citizens facility -– a home for the senior meals program as well as other activities, an upgraded public meeting chamber, space for the American Legion and Veterans of Foreign Wars (the latter uses the town-owned VFW hall on Kemble Avenue, another building known for its rather  tawdry interior); and center for streamlined government operations, such as a consolidated justice court to serve the town, Cold Spring and Nelsonville alike. At present, each local jurisdiction runs its own court.  Often seen as a way of saving taxpayer money, court consolidation “seems like a no-brainer to me,” Shea said. “Get them all under one roof.” Moreover, “it’s time to consider moving the entire town government to that site,” Shea said. “We’re overflowing this building. Do we want to spend money here or spend money over there at Butterfield?”

“Renovations are always more expensive than new construction,” said Councilor John Van Tassel. “I’m certainly in support of doing something and getting out of here. Butterfield is a wonderful location.” Besides, he added, “it would be a nightmare” to try to renovate Town Hall while simultaneously carrying on government from it.

“You’re talking about a lot of money” to fix up Town Hall, Councilor Betty Budney commented. If the town government moves to Butterfield, “in the long run, it is going to save money,” Shea predicted.

Shea, Van Tassel, Budney and Councilor Nancy Montgomery subsequently voted to authorize Shea to sign a letter of support for Guillaro’s plan. Councilor Dave Merandy, new to the board and less familiar with the Butterfield situation, abstained.

Meanwhile, members of the Cold Spring Planning Board began deliberations on the project, with concern over the myriad details and befuddlement over their precise role in the approval process.  A five-member committee appointed by the village mayor and trustees, the Planning Board typically reviews, amends, and renders approval or denials for new development plans in the village consistent with the village code. Technically, Guillaro formally applied to the Planning Board for approval of his plans. However, the Village Board decided to name itself the “lead agency” in the New York State Environmental Quality Review (SEQR) process, which involves coordinating the review and input by the many governmental agencies that will have jurisdiction over the mixed-use plan.  Without a go-ahead under SEQR, a project cannot proceed. Usually the Planning Board would have taken the lead role. At various times during their Jan. 24 meeting in the VFW Hall, Planning Board members expressed skepticism as to the Village Board’s capacity to handle the process from a technical standpoint given their lack of experience in such matters.

Complicating matters further is the developer’s intention to pursue zoning revisions to facilitate creation of a Planned Unit Development (PUD), permitting greater design flexibility than the zoning code currently allows. Planning Board members wondered about the scope and impact of their deliberations in a PUD context since the present village code would not be the standard by which the project would be ultimately judged.  Instead, the code would contain new provisions to cover a PUD at the site. To one degree or another, Planning Board members acknowledged the Village Board’s prerogative in the matter, but some questioned the prudence or necessity of a PUD designation and said they hoped the mayor and trustees would confer with the Planning Board before signing off on it.

Planning Board Chairman Joseph Barbaro said he thought it “atypical” for the Village Board to assume a lead role in such “a complex case, “which the Planning Board would usually handle. But he also said he appreciated the unique aspects of the situation, including the potential fiscal impact on the local government and economy requiring the trustees’ added involvement.  Barbaro, on behalf of the Planning Board, planned on writing a letter to the mayor and trustees outlining the Planning Board’s concerns on both procedures and issues.

Long-time Planning Board member Parge Sgro, who along with Richard Weissbrod voiced the greatest concern about the potential impact of the project, questioned why it needed to all happen at the same time.  “Since 1975 there have been a little over 200 R-1 developments, including houses, condos and some commercial. It took 35 years to have that amount of growth. Now we could get that much over night,” he said.

The Planning Board did resolve to move forward in examining such details as parking plans, storm water run-off, utilities and other items, requesting Guillaro and his consultants provide new information at the next meeting.