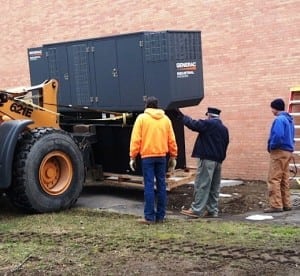 The four-year effort to establish a Philipstown-based shelter for residents in need during a storm or other emergency took a big step forward Thursday (Jan. 26) when an industrial-size electrical generator, weighing more than three tons, was delivered to the town recreational center. The generator, which will also benefit the center’s regular operations, allows the town to go forward with plans to have the Red Cross and the Putnam County Bureau of Emergency Services establish a shelter program at the center, located on Glenclyffe Drive off Route 9D in Garrison.

“We began in 2008 with a grant proposal for Homeland Security funds to pay for the generator, which was eventually approved,” said Amber Stickle, director of Philipstown recreation and parks, who worked on the grant proposal. She also credited Adam Stibling, deputy commissioner at BES, with helping write and shepherd the proposal through the bureaucracy. The county already has a shelter facility, but it is in Carmel, over 25 miles from Philipstown, and therefore not convenient, particularly in an emergency situation.

According to Stickle, a meeting is planned for next week with Red Cross and BES officials to work on details of the shelter program, such as whether cots and other supplies will be stored on-site or delivered as needed.  The shelter plan will not affect the regular recreation center programs.  Stickle said another month will needed for wiring and testing before the generator is online.

In the aftermath of storms in recent years town officials have underscored the need for an established facility to provide individuals and families a place to sleep, shower and eat.  Councilors John Van Tassel and Nancy Montgomery have spearheaded efforts to bolster the town’s capacity for emergency response.  Stickle said she believed the town would still need the four volunteer fire companies to assist and temporarily house stranded residents and visitors but that the new shelter would now be the key element of the town’s shelter response.

Stickle pointed out that Van Tassel, a construction contractor, put in numerous volunteer hours digging the trench necessary for the new generator’s electrical lines as well as preparing the concrete base underneath the device.  She also said that Valenti Concrete donated the necessary concrete for the generator foundation and Pidala Electric was handling the installation and connections on a discounted basis.

Highway Superintendent Roger Chirico and crew were on hand to take delivery of the generator and move it to its permanent location at the rear of the recreation center.