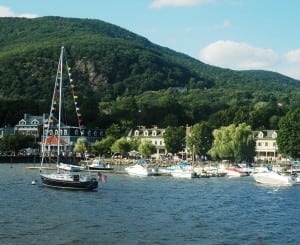 Cold Spring from the Hudson River

To help “create vibrant waterfront communities,” starting at home, the Cold Spring Village Board last week endorsed six principles for riverside development. In its unanimous vote on Jan. 24, the five-member board declared its support for guidelines drawn up by the environmental organization Scenic Hudson, which call on municipalities to:

The principles or guidelines and ideas for implementing appear in Scenic Hudson’s 102-page handbook, Revitalizing Hudson Riverfronts, which the group discussed in a presentation at a Village Board meeting in December 2010. The Village Board’s resolution links the principles to the village Comprehensive Plan, adopted on Jan. 10. As the resolution states, through  the plan, Cold Spring intends “to support mixed-use development that is compact and is site-sensitive in building design; in close proximity to transportation hubs where infrastructure exists; is publicly accessible; preserves open space, scenic views and critical environmental areas, and develops a sense of place.”  The resolution also notes that “community participation in supporting the principles … is voluntary” and that “the guide does not supersede or change the powers that the state has previously granted municipal governments.”

In the handbook Introduction, Scenic Hudson said it wanted to encourage “lively, pedestrian-friendly, mixed-use riverfronts in and adjacent to municipal centers while conserving forests, farms, wetlands, and fields and providing for a continuous public greenway corridor along the river.” Such a land-use pattern, the group said, “will allow riverfront communities to accommodate and benefit from new development in ways that increase economic viability, enhancing main streets and community life while protecting the Hudson River’s ecology and internationally celebrated beauty.” 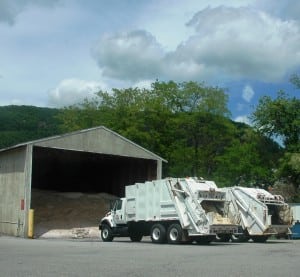 Out-sourced garbage and recycling collection, revisited
In other business Tuesday, the Village Board resumed weighing the positive and negatives of out-sourcing garbage and recycling collection, which the village Highway Department currently handles. As he had promised a few weeks earlier, Trustee Airinhos Serradas brought in a draft RFP (request for proposals) for companies to use in submitting bids to provide the service. But Mayor Seth Gallagher read a memo from Village Attorney Stephen Gaba that criticized the draft as confusing and inconsistent in language and approach. Gallagher also repeated his conviction that out-sourcing garbage and recycling collection would be more expensive than having village employees do it, unless the Highway Department laid off staff. Otherwise, he told Serradas, “you’re proposing something that’s $100,000 more. I’m open to saving money. I’m not open to wild-goose chases that cost money.”

“Is there any harm in finding out the true costs?” Serradas asked. Under the terms of Serradas’ draft RFP, the village would use out-sourcing “to provide trash pick-up and curbside recycling for all single-family residences within the village and to bill this service as part of the monthly utility bill.” The village government now picks up garbage and recycling as a standard village service -– at no particular charge to households. As drafted, the RFP likewise would allow the collection firm to charge a household a higher rate if it generated a higher volume of garbage, and to limit recycling pick-ups to bi-weekly, instead of continuing the current practice of collecting recycled goods once a week.

While critical of Serradas’ initial effort, Trustee Bruce Campbell subsequently offered to help him review the matter, with the possibility of drafting a better RFP. The rest of the board concurred, postponing a conclusion to the debate, at least temporarily.
Photos by L.S.Armstrong