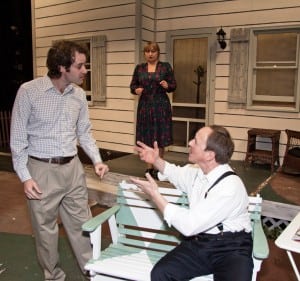 The story of an American family

County Players continues its 54th season with All My Sons, which opens on Friday, Feb. 3 at 8 p.m. All My Sons, Arthur Miller’s first commercial success, tells the story of an American family caught up in the struggle between personal responsibility and duty to their country. Joe Keller, a successful and self-made man, has done a terrible thing: during World War II, hurriedly trying to meet an order from the Army, he knowingly sold them defective airplane parts which later caused the planes to crash and killed 21 men. He engineered his own exoneration and falsely turned in his business partner. His son is about to marry the partner’s daughter, and when the issue is revisited, Joe’s lie is revealed. While spending his whole life in the pursuit of wealth for the sake of his family, Joe represents the American Dream gone wrong.

Bill Peckham directs with a cast that includes: Glen Macken, Zsuzsa Manna, Michael Burke, Janet Nurre, Gabriel Chalfin-Piney, Gary Dodge, Anna Marie Paolercio, Eric Manna, Annie Deslandes, and Xavier Johnsonn.  Peckham states, “It’s hard to believe that Arthur Miller wrote this play in 1947. The trauma we put our sons and their families through in World War II is the same trauma families face today with the Middle East. This play really hits home and makes us take a close look at ourselves.”