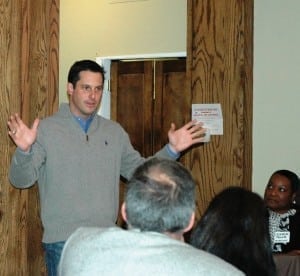 Sounding more like a populist reformer than a traditional Republican, State Sen. Greg Ball last week criticized both major parties, voiced support for small businesses, urged a different way of funding school districts, and declared his intent to seek re-election to New York’s 40th district. A former Air Force officer in his first senate term, Ball commented in a free-wheeling forum hosted by the Cold Spring Area Chamber of Commerce at Whistling Willie’s restaurant on Thursday, Jan. 26. Ball’s district includes Philipstown, although for how long is uncertain. A statewide redistricting plan released Thursday by the New York State Legislative Task Force on Demographic Research and Reapportionment reconfigures the 40th district and dumps Philipstown into the 41st district, currently served by State Sen. Stephen Saland. Accusations of blatant gerrymandering greeted the redistricting across the state and Gov. Andrew Cuomo, a Democrat, immediately threatened to veto the plan if it reached his desk without corrections. Appearing in Cold Spring shortly after the redistricting announcement, Ball appeared sanguine. “Ideally it would be great to have a truly independent redistricting process,” removing it from the State Legislature and partisanship entirely, he said. In a formal statement from his office, he also said that “for me nothing will change. My focus before and after re-districting will continue to be on job creation, lowering taxes and working with Gov. Cuomo to get New York State back on track. I am proud to have the opportunity to represent the seniors, veterans, small-business owners, taxpayers and hardworking families in Westchester, Putnam and Dutchess counties.”

The senator did not hesitate to take aim at his own Republican party and recalled that in his first run for State Assembly, the lower house, “the Republican Party spent over a million dollars against me” in a primary. “I hate both political parties!” he said, drawing strong applause. “Both political parties are completely corrupt.” He decried the long-existing political morass in Albany, though he emphasized the swamp-draining underway under Andrew Cuomo, with help from frustrated Democrats and Republicans alike. As a new member of the Assembly a few years ago, he discovered that “you’re not doing your job if you’re not holding that chamber accountable.” Now, he said, after the recent drive for change “when you compare” Albany to Washington, D.C., “it’s totally remarkable.” Fixing the Empire State is an ongoing process, he said, “but finally we’re moving in the right direction.”

He questioned some of his own party’s national stances.  “I don’t know how Congressional Republicans painted themselves into a corner” on tax and budget issues, allowing President Barack Obama, a Democrat, to come out as the champion of the middle-class taxpayer, Ball said. Yet in terms of reform and deft political maneuvering to achieve it, “Obama doesn’t hold a candle to Gov. Cuomo,” Ball added.

For years, Putnam County, site of “disgusting, corrupt” political machinations, likewise needed a clean-up, Ball said. He said that when he first got involved in county politics, “it was an amazing experience, somewhat akin to waterboarding” – a harsh method of interrogation often denounced as torture. Lately, he said, “it has changed. Differences are hashed out with mutual respect.” He indicated a need for continued vigilance, though.  “Leibell may have met justice, but there are still zombies in Putnam County,” Ball quipped. Former State Sen. Vincent Leibell, a Republican about to become county executive, instead went to prison in 2011 after pleading guilty to federal charges of tax evasion and obstruction of justice.

“We’re all in this together,” Ball said of politicians and public, adding that for elected officials, “the point is all of us are replaceable.” However, he indicated that he hopes to not be replaced immediately, declaring that he is running for office again this year. Nevertheless, “I don’t plan on doing this for life,” he said. “I don’t view politics as a profession.”

Turning to another hot topic, Ball said he favors reform in school funding, welcomes a serious look at school consolidation, and supports a strong federal role in education. “I think Putnam County is in a perfect situation to provide a case study for consolidation,” the senator said. “And the [funding] system itself needs to be changed.” Ball said that he backs a “circuit-breaker” hybrid approach that would use both property taxes and income taxes to fund schools but, longer range, also would welcome a stronger role for income taxes – including taxes on income from investments and not just wages — to pay for education. Beyond that, he explained, citing his differences with the national Republican Party, “I believe education needs to be a federal priority.”

Haldane Central School District Superintendent Mark Villanti, one of about 35 persons attending the forum, told Ball that “we’re perfectly open at Haldane to consolidation. But when you dig deeper, it’s not as simplistic as it sounds.” Consolidating Haldane and the Garrison Union Free School District would require a justification of higher taxes for Garrison residents, Villanti said. Above all, the superintendent cautioned, “you’ve got to have the political will” in the town to do it.

Ball enthused about the role of small businesses in the local economy. “We’ve got to focus on helping small business currently struggling to survive,” as well as those seeking to expand, and any wishing to move into the area, he said. At the state level, “we’re going to work to bring in more dollars” to help on all three fronts, he pledged. “Government needs to be an expediter.”

He also advocated government assistance in promoting tourism in the area, which he termed “the crown jewel” of the western side of Putnam County. “It’s an amazing asset,” one that others should know about, he said. He observed that he supported the Walkway over the Hudson in Poughkeepsie and,  answering a question from Cold Spring Village Board trustee candidate Tom Rolston, said he would “be very happy to try to find some flexibility in the [state] budget … some dollars” for a proposed Hudson River Fjord Trail. “I’m here to work for you,” Ball told the group.
Photo by L.S.Armstrong