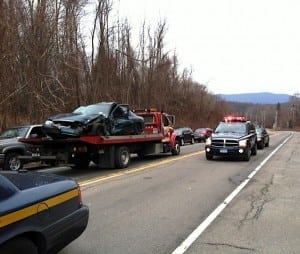 Car involved in accident taken from the scene

Diesel fuel spill cause for concern

Route 9 was closed to traffic for several hours in both directions from the Route 301 traffic light south, after an auto and truck collision. The accident occurred at approximately 10:45 a.m. Thursday (Feb. 2) when a southbound car apparently crossed over the lane-dividing line and crashed into the side of a northbound trailer truck. The car’s driver was seriously hurt and needed an extraction by firefighters from the vehicle. He was then evacuated by helicopter to a hospital, according to witnesses at the scene. The truck’s driver was unhurt, but the vehicle’s fuel line and tank began to leak diesel fuel onto the road and a nearby property. 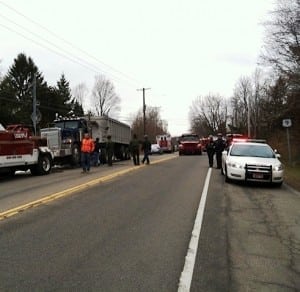 The accident occurred just south of the traffic light in front of a residence at 2792 Route 9.  The leaking fuel spilled along the front of the lawn and then traveled further down in a small stream onto the property. Homeowners Andrea and John Maasik told Philipstown.info that DEC officials told them the spill was relatively small and had been contained. They said DEC officials also assured them the agency would perform a complete cleanup and then bill the trucking company for the expense. 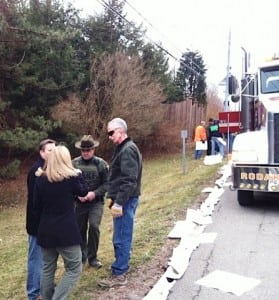 Homeowners receiving assurances on clean up from DEC

Firefighters from the North Highlands and Cold Spring Fire Companies, the Philipstown Volunteer Ambulance Corps, and officers from the state, county sheriff and the Cold Spring police responded to the scene.