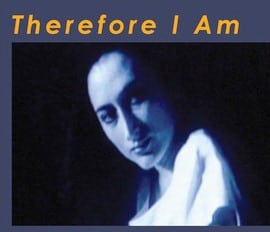 The invigorated Garrison Art Center has been expanding its artistic vision both in terms of programming and exhibits.  This Friday, Feb. 10, an artists’ reception will herald the official opening of the Center’s first group video exhibition (the exhibit actually opened on Feb. 4.)  Eight artists, two in collaboration, were selected by exhibit curator, multimedia artist Greg Slick, for inclusion under the banner of a group show. Entitled Therefore I Am, the collective theme is, broadly, personal demons, identity and obsession and how the artists deal with those close to them: family, friends, lovers. 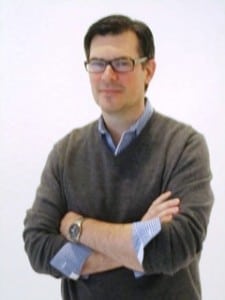 Slick, an independent curator based in Beacon, and a co-founder (along with Karlos Carcamo and Joe Millar) of the Go North gallery (2006/2009) there, was approached by the Art Center, now interested in doing different types of programming, about putting together a group video show.  According to Slick, group video exhibits aren’t rare, in fact there is one taking place in the basement at DIA right now, and Slick presented them at Go North, as did Collaborative Concepts and the Carl Van Brunt gallery, to name some nearby (now gone) galleries, but Slick feels that video and film are under-represented in the Hudson Valley art world generally — he finds it “commendable that Garrison Art Center is including this kind of show in its programming.”

Video shows do present their own specific kinds of challenges. Citing his goal as curator as “making sure the work speaks for itself,” Slick delineated the differences between a solo show, where the difficulty lies in “representing the artist’s intent — the intent reflective of practice,” and the very different challenges of group shows: “you need to create a dialogue between work that’s often disparate, fully connecting the threads under the umbrella of a concept. The group show concept can be as simple as taking the pulse.” 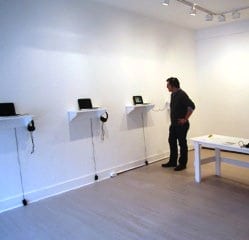 Conceptually, Therefore I Am is more complex, and Slick relied upon his curatorial knowledge to select artists whose work he knew would delve into its personal demons theme. The artists represented are Brian Doyle, Richard Kroehling, Marko Mäetamm, Mollie McKinley, Therese McPherson and Athena Torri, Brian Stinemetz and August Ventimiglia. Some had exhibited at Go North and at The Artists Statement Picture Show, a one-night event which happens every so often, showcasing “artists making cutting edge film, video, and new media,” said Slick, who co-directs the events with Mollie McKinley. For Therefore I Am Slick chose artists whom he knew had the thematic matter in common. “Their ways of going about it are very different but obvious to the viewer.”

Without a common bond of age (the represented artists include a few “emerging,” just out of school, others in mid-career and some well-established) or geography (they come from New York City, Beacon, Cold Spring, Massachusetts and Estonia) they were chosen “not particularly because of who they were, but in how the work spoke to me; I was familiar with the work of all the artists,” Slick said. “Primarily my criteria was something that would stir my blood. Secondly, it was things that would approach the subject in different ways. We have a number of different film and video genres. There are two text-based pieces; a piece that plays with the idea of home movies; two experimental videos, which are very cinematic; and a performative video. The subject matter is executed in very different ways.”  Cold Spring’s Richard Kroehling is among the artists participating.  Slick called Kroehling “A very accomplished director, a real veteran of television and film with many awards behind his name. He has two pieces in the show and he’s a real maestro — a master of the art. We’re fortunate to have him in the show.” 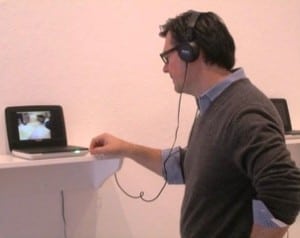 Testing the audio as the exhibit was being put up

The videos will be shown in a continuous loop, and their duration runs from about 3 minutes to 18 to 20 minutes for the longest piece. On Feb. 26, a panel discussion will enable the artists to share their work more fully with an audience. There isn’t a lot of explication text around the gallery — just some wall text introducing the artists, summarizing who they are — and that’s intentional, “As a curator, I would rather have the audience experience it on their own terms. I feel my point of view is already integrated into the choice made and how the exhibit is designed.  As I’ve said, the goal of the curator is for the work to speak for itself.”