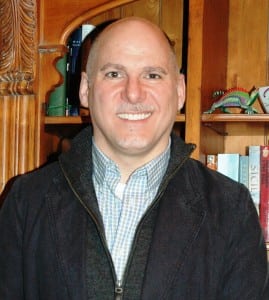 Matt Francisco, a professional operations manager who discovered Cold Spring as a day-tripper and liked it so much he moved here, has announced his candidacy for village trustee. Francisco, 48, becomes the third candidate vying for two open trustee posts on the Cold Spring Village Board in the March 20 voting. He informally launched his candidacy Friday evening (Feb. 3) at a gathering in a High Street home, where his friends from throughout the village joined neighbors of the hosts as he unveiled his platform. He later met with Philipstown.info to further discuss his views.

A native of Cuyahoga Falls, Ohio, Francisco earned a masters in industrial and organizational psychology at the City University of New York and works as director of project management for Macro Consultants, a firm that oversees property-related projects for clients. His background also includes expertise in the financial end of operations and information technology.

Francisco said that he and his partner, Joe Patrick, “started coming here as day-trippers and fell in love with the place.” About nine years ago, they bought and renovated their 19th-century home on Orchard Street and stared getting involved in village affairs.  “This is a very special place that needs protecting. I believe very strongly in community service,” he said, likening the bond between citizen and town to that of a human couple. “You can’t just take,” he explained. “You have to give back, or the relationship won’t work.”

As an interested resident, he said he began following the activity of the village’s Historic District Review Board and other panels and such issues as the dark-skies lighting initiative. Through funding from the Hudson Highlands Land Trust, the Village Board last year subsequently installed new lighting at the Hudson River dock, providing strong illumination while allowing mountains, river, and stars to remain visible after dark. It took several years of acrimonious public meetings and an overriding of the HDRB by the Village Board in December 2010 to finally get the project underway, however. “I really respect the work” of such boards as the HDRB, Planning and Comprehensive Plan boards, and Zoning Board of Appeals, Francisco said. But “they’re supposed to be serving us” and some seem to get bogged down in endless wrangling, dragging projects along and acting in ways both “inefficient and inappropriate” as well as inconsistent, he said. At some point, he said, “you have to make decisions. You have to do your due diligence and move on.”

Noting how long it took to get the dark-skies lights in place and for Scenic Hudson to get its West Point Foundry Preserve designs through the village Planning Board, he said he wanted to help the village run smoothly and display a welcoming attitude toward potential donors and allies. “My concern is that we become the town that is just too difficult to help,” he said.

If elected, he said he would strive to:

Asked to identify wasteful spending, he mentioned legal fees resulting from friction on the Village Board and the resulting frequent recourse to advice from the village attorney, though he also credited the administration of Mayor Seth Gallagher with making village government more open, well-run, and friendly in the last three years than it once seemed. Given his project management experience, Francisco said, “I know how to get things done on time and under budget. I also want to see our local businesses thrive. Innovative business ideas can come out of tough economies” and Cold Spring could become home to “local, owner-operated start-ups,” he proposed.

Summing up, he said that seeks office “because I love this unique home of ours and want to do what I can to preserve and protect our historic character and natural resources. This is really what matters to me, why I’m doing this.”