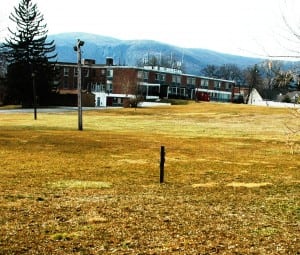 Some dissents are heard while developer presses for speedy resolution

Cold Spring’s Village Board Tuesday night (Feb. 7) hired GreenPlan consultants to advise its members and the village Planning Board on the old Butterfield Hospital development project, proposed by the owner-developer of the 7.2-acre tract on the southern gateway to the village. The 4 to 0 vote by Mayor Seth Gallagher and Trustees Bruce Campbell, Charles Hustis and Airinhos Serradas  (with Trustee Ralph Falloon absent), followed a lively, joint session with the five-member Planning Board and GreenPlan’s Ted Fink and Michele Greig. GreenPlan advised the village on the Cold Spring Comprehensive Plan, adopted last month, and continues to work with the Special Board drafting a Local Waterfront Revitalization Program. At the Village Board’s request, the Special Board is likewise analyzing the implications of the Butterfield development.

Unlike the unanimous Village Board, Planning Board members disagreed on the need to bring in a consultant. Their dialogue with the Village Board also reflected uncertainty about their role in the Butterfield matter.  “It’s confusing to me and I think confusing to a lot of people,” the mayor acknowledged at the offset. He said that decision-making “involves the Planning Board but also involves the Village Board because of the zoning change” sought by developer Paul Guillaro of Butterfield Realty LLC, the property’s owner. As the applicant, the developer will foot the bill for consultant services.  Joined by his attorney, Richard O’Rourke, Guillaro watched from the audience as the two boards wrangled, but said nothing. 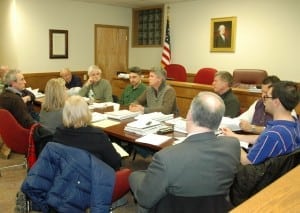 Members of the Village Board and Planning Boards discuss the project with village staff and GreenPlan consultants.

“If you’re going to go out and hire a planner, what good are we on this board?” Sgro wondered. “I feel we volunteer our time to no avail. We’ve done subdivisions before. We had no problems.” He emphasized the Planning Board already has an outside expert -– the engineer it has used for years.

“A majority of the Planning Board thinks we need a little more help than that,” Planning Board Chairman Joseph Barbaro observed. “I think the complexity of the project justifies a planner,” Arne Saari, another Planning Board member concurred, as did the fifth member, Richard Weissbrod. In obtaining consulting services, “I am conscious about not running up too much of a bill” for Guillaro, Gallagher commented.

Guillaro wants to demolish the decrepit, vacant hospital building while preserving the Carolyn Lahey Pavilion medical offices, subdividing the tract and constructing a combination of modest-cost rental units and more upscale condominiums, both for senior citizens, plus an inter-governmental building for village, town and county operations, along with retail space. Philipstown officials also have advocated inclusion of a senior citizens center in the complex. At present, the hospital property is zoned for medical usage, with the possibility of adding senior housing by special permit. By contrast, Guillaro’s complex, which could include new quarters for the post office, would be a planned unit development, or PUD, with mixed usage, hence the need for one or more zoning amendments.

Tinkering with the zoning “is not our call. That’s your call,” Immorlica reminded the mayor and trustees. For their part, he said, Planning Board’s members “have got a simple job. The ground rules are laid before us” in the existing zoning and “all we have to do is follow them” or, if the zoning changes, consider the project in terms of “the route to take” then.

“You’re doing more than just a normal application,” Gallagher answered. “You’re also helping us create a new zone. We’re kind of in a weird way doing it together.” In making a zoning change, he said, the issue is “how do we make it so it satisfies what we feel is the best interests of the village, the residents?” 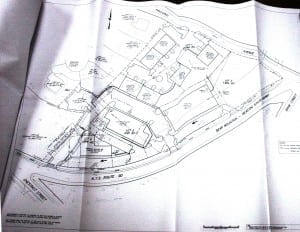 Village Attorney Stephen Gaba said that the village could steer the development to include the kinds of structures it wanted, and then craft the zoning change to allow for those and exclude anything unwelcome. “What you’re kind of doing here,” he advised, “is developing the zoning law by putting together a development which is acceptable to the Planning Board. You tailor the local law to [get] the development you like.” Such an approach, he said, “allows you to exercise great control over this development, more so than if you went with traditional zoning. This is a very important project for the village.”

Architectural concerns and fear of ‘warehousing’ the elderly

The architectural style of Guillaro’s construction, addition of dozens of senior citizen housing units, and the development’s mixed-use nature also prompted reservations. Weissbrod expressed concerns about “how different these buildings will look, given the rest of the community” and about the proportion of seniors in the population. “These numbers are going to change our village character somewhat,” he said. “I’m very concerned we’re going to be warehousing the elderly in our village. I don’t want anybody warehoused here. I want them to live here and be happy.”

“This is a mixed-use type of development,” Sgro said. “Are we ready for that in this community? How would that fit in this little town the way it is?”  Cold Spring began in the 19th century as a type of mixed-use community, with shops and private residences sharing buildings, and houses frequently located alongside commercial buildings in neighborhoods. However, by the middle of the 20th century, patterns had changed, with growth of suburban-looking residential enclaves, like those bordering Route 9D on the village’s north end.

The question of the availability of sufficient water at the site to sustain an adequate “fire flow” – the amount needed to fight a fire – also surfaced, as the Village Board meeting continued after the Planning Board members departed. Butterfield Realty contacted the village Water Department about conducting a fire flow test at the property and Gallagher said a test would be useful in determining if fire-flow ”turns out to be worse than what we think it is.” He suggested that if a test occurs at Butterfield, the village similarly test other areas, such as at the top of Main Street. Fire-flow is expected to improve after the village undertakes a pending, major cleaning and re-lining of the aging major pipe running down Main Street. The mayor said that tests prior to the pipe scouring would provide “something to measure by after the relining and we can see what was the improvement” in fire-flow.

O’Rourke, Guillaro’s attorney, urged the village government to move expeditiously and avoid cutting the project into separate pieces doled out for review by various boards. “Segmentation is frowned upon … from a planning perspective and a legal perspective,” O’Rourke said.

“We want to move it along smoothly but we also want to cover all our bases and make sure we do it right,” Gallagher replied.

On a typed sheet provided the Village Board, O’Rourke a recommended a schedule for village action: