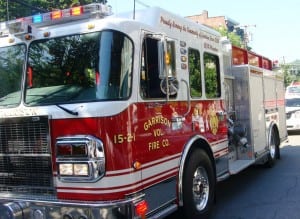 When Dr. Ernest Kafka heard his wife screaming for help last Aug. 23, he knew the situation was dire:  It was dark, around 10:40 p.m., and he couldn’t see or locate her, though he knew she had to be out there somewhere, in the rocky ground around their Garrison home. A frantic call to 9-1-1 followed. More than five months later, Kafka and the Garrison Volunteer Fire Company (GVFC) revealed the events of that harrowing Tuesday evening. Without the GVFC’s help, his wife most likely would have perished, Kafka told the fire department.

Once the call came that August night, according to information compiled by the GVFC’s Michael Del Monte, Firefighter Chris Simone raced to respond, accompanied by his daughter, Libby, another GVFC member, who live nearby. Upon reaching the accident scene a few minutes after the emergency summons, Chris Simone climbed down a hillside of boulders, to find Dr. Kafka’s wife badly injured, lying in rocky terrain about 30 feet below her house. “By this time,” according to the GVFC report Del Monte compiled, “the main fire company crew had arrived in the rescue truck, 15-6-1, and had set up above.” Bill Rimm, assistant chief and incident commander, called for a helicopter. Meanwhile, a second fire company crew, in engine 15-2-2, had also reached the site and Rimm directed its members to clear a landing zone at Polhemus Construction, not far away, Del Monte’s report related.

The first crew then rigged a rope system and lowered a basket litter; Chris Simone loaded the injured woman into it; and the firefighters “hauled her up the hillside and loaded her into a Garrison Volunteer Ambulance Corps ambulance, which rushed her to the waiting helicopter. She was then flown to the Westchester Trauma Center,” the report added.

Dr. Kafka said that his wife had six ribs broken on both sides, some fractured more than once; two crushed thoracic vertebrae, and two badly broken cervical vertebrae. Admittedly “distraught that awful night,” he told the GVFC in a recent thank-you letter that at the scene he failed to adequately acknowledge the crews’ outstanding work. GVFC President Jamie Copeland read Kafka’s letter at the Philipstown Town Board’s formal monthly meeting, Feb. 2. The fire company subsequently provided Philipstown.info with a copy of the letter and its report on the incident.

In his letter, Kafka noted that Barbara Scuccimarra, a former Town Board member,

told me you were the people who saved my wife from probable death by scooping her off our hillside and sending her to Westchester trauma center. I can’t thank you enough for what you did. Sometimes one doesn’t realize how much one loves someone else until one sees them in such frightening and pitiable circumstances. I certainly found out that night and during the following weeks. I’m especially grateful to the first man who arrived [later identified as Simone] who bravely went down through the boulders and found my wife. Had she lost consciousness and been unable to call for help, I’m pretty sure she would have died before morning light.

Even after his wife reached the hospital, “it was touch and go,” Kafka said. “But she survived and has since slowly improved, can walk and talk, and think more normally, and is at home, having physical therapy and lots of support from family and friends.” In conclusion, he told the fire company that he was providing them with an unidentified token of his gratitude, “which is nothing considering what you accomplished.”

The GVFC report stated that the other firefighters involved in the rescue were Assistant Chief Bob Langley, Joe Fronio, Kyle Irish, Allan Simmons, and Ralph Callender and that New York State Police and troopers from the Putnam County Sheriff’s Office also responded.
Photo by M.Mell