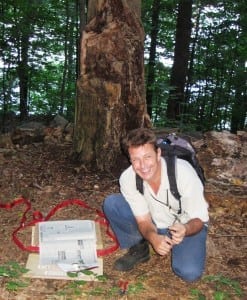 Daniel Atha at work at the Ice Pond. (Photo by Debra Adamsons)

At the outset of its annual horticultural and conservation lecture, Philipstown Garden Club’s guest speaker, Daniel Atha, was described by the Club’s Marie Greener, as having “one of the more interesting jobs on the planet.”  Atha, a botanist and research associate at The New York Botanical Garden (NYBG), divides his time between collecting botanical specimens during the warm months and naming and classifying them during the winter.

He has spent two decades doing this in the far corners of the globe, naming new species and cataloguing the flora in Belize, Vietnam, and, most recently at Lagodekhi National Park in Georgia — that would be the Republic of Georgia, not the peach state.

As funding for these far-flung expeditions contracted along with the economy, Atha recognized that working closer to home made economic sense as well as satisfying a desire to connect with the community in which he lives and works.  A colleague at the NYBG doubled as a member of the Putnam County Land Trust, and suggested that Atha consider turning his research towards one of its many preserves, mainly in the eastern portion of Putnam County.

One look at the Ice Pond Conservation Area (IPCA) and “It was immediately apparent that this was a rich area,” said Atha, whose subsequent cataloguing and follow-up research bore this out.  Of the approximately 3,000 species of flora found in New York state, the Ice Pond, part of the Great Swamp, contains 543, making it one of the richest repositories of plant diversity in a small and still relatively pristine natural area.  The stated goal of the research, in the form of a botanical inventory, per the NYBG website is “… to provide a scientific assessment of the flora to enhance management, conservation and recreation programs.”

Atha began his talk, which was accompanied by a visual presentation, with a geological, geographical and historical background on the overall area.  The approximately 900-acre IPCA area, is located in the northeast part of Putnam County, in the town of Patterson, about seven miles from the Connecticut border.  The surrounding hills are remnants of the Reading prong of the Hudson Highlands, which are themselves an outlying extension of the Appalachian Mountain Chain.  Through the examination of sediment, geologists have determined that these mountains, which have twice eroded down, were once the height of the Himalayas.  The area was completely covered by a series of glaciations, the latest of which, the Wisconsin, ended about 10,000 years ago.  The ice layer receded and not long after, by approximately 8,000 years ago, there is evidence of Native American life there. The last native group, the Wappingers Confederacy, was pushed out by European colonization shortly after the Revolutionary War.  From colonial times until fairly recently, the area was utilized for farming, its tillable acres denuded of trees.

From at least the mid-19th century, the ice pond was used to harvest ice. The unexposed location amidst three hills kept it shady and cool and yielded deep ice, and the condition, far enough away from the soot and ash of New York City yet close to railway tracks, made it attractive to the Knickerbocker Ice Company, which set up a facility including a 70,000 square-foot warehouse, a dormitory for workers and even a jail, on site.  The ice was loaded onto rail cars and sent down to New York City.  There were two railroad stations, one each at the north and sound boundaries of the IPCA:  Dyckman’s, which was on the Harlem rail line, at the southern end, and Towners, at the north. Commercial ice harvesting declined as refrigeration became available and ceased all together by the 1920s. 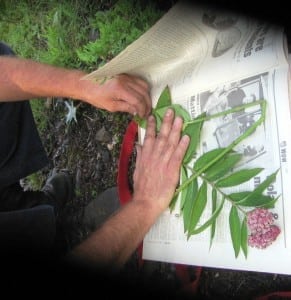 The wooden ice house burned in the 1950s and all that remains are remnants of the huge foundation and those of the smaller out-buildings.  From then on, the land lay fallow, with no commercial activity Since it was acquired by the Putnam County Land Trust, the area has undergone an “amazing transformation,” according to Atha, “from an industrial crossroads to a biological treasure house.” Kept level by its under layer of marble, which erodes evenly, the Great Swamp is now one of New York state’s largest wetlands, and a very important ecological resource. Home to multiple, mammalian avian, amphibian and reptile species, from waterfowl to bobcats, otters turtles and salamanders, the flora count vies with the fauna in range and rarity.

Pausing in his presentation on the IPCA, Atha described the New York Botanical Garden itself as a public/private partnership established at the turn of the 20th century. The NYBG established the first museum in the United States dedicated to plants.  Its three branches: science, education and horticulture, work together to bring shows to the public, as well as offering hundreds of continuing education courses, graduate education and a world-renowned school of professional horticulture. Its grounds contain a “living collection with 50 specialty gardens, including a newly-opened Azalea garden.” Their herbarium holds the “third or fourth largest collection of dried plant specimens in the world.”

Contrasting his own field work with that of the earliest NYBG botanists, Atha showed an image of gents in white linen suits hauling bulky equipment on boats, and alluded to horseback expeditions. Nowadays, the mode of transportation has shifted to a pick-up truck, and streamlined equipment consisting mainly of a plant-press, notebook, clippers, and cell phone equipped with GPS and high resolution camera. With these provisions Atha made 67 visits to IPCA during a three-year period from 2007 to 2010, covering every month of the year.  Noting that he “walked every inch” of the 900 acres (save some of the private land which is contained within), Atha showed overviews of the site, which he described as just over a mile long, top to bottom, and just under a mile, side to side. During his visits he was able to document 543 individual species located within 20 distinct ecological communities.

Explaining that “every inch of land in New York State including suburban yards, sidewalks and nature preserves is divided into systems and sub-systems and within the sub-systems there are communities, defined largely by hydrology, the Ph of the soil and by the plants and animals which inhabit them” Atha collected samples for field pressing, which he described as “a science with an art to it; arranging them on a sheet to preserve them.” The field pressings are then brought back to the professional mounting specialists at the NYBG who place them on acid-free paper and archive them.  Of the seven major habitat ecological systems found in New York state, three are found at the IPCA: lacustrine (contained waters in depressions or dammed river systems), palustrine (non-tidal, perennial wetlands dominated by emergent woody or herbaceous vegetation), and terrestrial (all above ground habitats that are not wet throughout the year, although they may be seasonally flooded or saturated.) 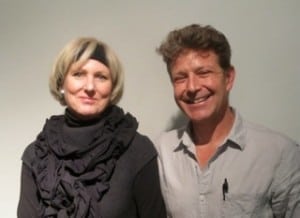 Images shown of some of the rarely-found flora in this high plant diversity region included the Canada Lily, Slender Bush Clover, Rue Anemone and Orange Grass St. John’s Wort, many of which have grown alongside the railroad and power line rights-of-way power that cross the IPCA.  Atha described himself as happy at having documented an example of the increasingly rare native bittersweet, glad to have a specimen as later he was “incredulous of my own work” in finding it.

Atha is inspired that all of this now-recorded data will be available for use by generations of scientists and resource managers to come.  He paused to wonder at how helpful it would be to botanists, ecologists and anyone interested in history now if a similar undertaking had been possible hundreds of years ago—“If only Peter Stuyvesant had commissioned a botanical survey of New Amsterdam back in 1650!”

Program room at Desmond-Fish was full

The full results of Atha’s work, entitled “The Flora of Ice Pond Conservation Area” can be found HERE.

Photos by A.Rooney except as noted.