President-elect Abraham Lincoln, on his way by train from his home in Illinois to his inauguration in Washington D.C., stopped briefly at the train station in Peekskill, N.Y. to offer some words of thankfulness and optimism to a waiting crowd this past Saturday, Feb. 18. The president-elect agreed to the meeting at the invitation of former Congressman William Nelson, who served with Lincoln in the House of Representatives.  Presiding over the festivities was Henry Ward Beecher, famous abolitionist minster and brother of the author of “Uncle Tom’s Cabin”, Harriet Beecher Stowe.

After listening to a formal greeting from Nelson, now a Peekskill attorney, Lincoln spoke only a few sentences, seeming to be already burdened by the affairs of a nation on the verge of civil war.  “If I can be as generously sustained as the demonstrations I have witnessed indicate I shall be, I shall not fail,” said Lincoln referring to other places he had stopped on his long train journey as well the appreciative populace of Peekskill. [SEE VIDEO]

Although only a quick visit, local residents were obviously honored and charmed by the presence of the tall man in the black suit and stove top hat.  Many in the crowd shouted out Lincoln’s name along with words of encouragement.

Saturday’s event was, according to reliable local sources, the 108th time Peekskill history buffs and local politicians have held a Lincoln celebration centering on his train station greeting. The actual event occurred on Feb. 19, 1861. In those days presidents took office in March, not January, as they do now.

In the current iteration, Lincoln, re-enacted by former Peekskill High School history teacher, Michael Griest, arrived at the Peekskill Metro-North station and was then escorted by military units, Civil War re-enactors and a contemporary formal color guard from West Point, over to the original station depot a few blocks north. Lincoln spoke from the platform outside the depot, which is under construction as the new home for the Lincoln Depot Museum. The museum is intended to illustrate the role Peekskill residents played during Lincoln’s presidency and the Civil War. 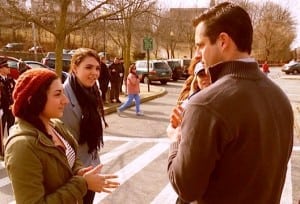 Two seniors from Haldane, A.J. Curto and Emily Lombardo, have served as interns at the Lincoln Depot Foundation, which is creating the museum in partnership with the Peekskill city government. Both of them expressed an interest in history (they took the advanced placement course) and an enthusiasm for what they have learned about starting up and promoting a civic project such as the museum.  Philipstown.info covered the event after the pair visited our office on Main Street in Cold Spring. “It’s like being on the ground floor of a business, seeing how things operate,” said Lombardo who plans to major in history in college. “It’s also very exciting to be where Lincoln was, celebrating him– he was right here,” said Curto.
Photos by K.E.Foley

One thought on “Lincoln Stops in Peekskill on Way to Inauguration”