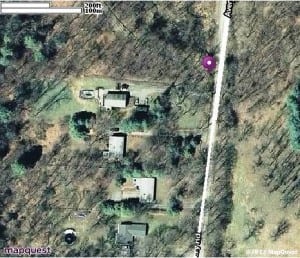 Garrison residents packed a Philipstown public hearing at the VFW in Cold Spring on Thursday Feb. 16, protesting plans by neighbors to construct a 16,000 square-foot building to house their art collection and provide staff bedrooms. Undergoing review by the town Planning Board, the project, proposed by Nancy Olnick Spanu for 245 Avery Rd., drew complaints that the edifice, though dubbed a home, would in fact be “a translucent warehouse,” a “monstrosity,” or “a box, as insensitive a structure as can be imagined.” Some also said it resembles an industrial storage facility, the size of the entire Foodtown block from the post office to the bank – or even larger, as the Foodtown complex is only one-story. The Garrison Volunteer Fire Company weighed in, too, in a letter raising questions of adequate access.

The Spanus currently have a home on the property and the new construction would be separate from that. According to Glennon Watson, of Badey & Watson Surveying & Engineering P.C., who represented the Spanu family, the building would be made of steel and concrete, with a flat roof and plastic panels on the side colored to blend in with the trees and terrain. “There’s been some rumors around, there’s been a lot of chatter around, and there’s been a lot of concern on the part of our applicants,” Watson said. “First of all, any accusation that they’re trying to use this for hidden commercial purposes simply is not true. This is intended as a residential structure because that’s what we can do there,” under the zoning. “It would be a rentable building,” he acknowledged, “though frankly I doubt they would rent it.”

Watson said that the building’s sides would be translucent but fitted inside with curtains to admit light from outside or keep light within from getting out. The Spanus want to use the structure to display and store their extensive private art collection as well as provide quarters for staff members or visiting family and friends, he said. The designs he showed depicted a long, rectangular structure. “We anticipated there would be significant concerns with the size,” he said. “We can’t tell you it’s not big.” However, Watson said, the plans initially called for it to be even bigger, nearly 20,000 square feet. 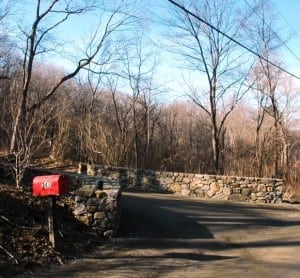 The wooded area near the entrance to 245 Avery Rd.

Kenneth Hoff, the first resident to speak, told the Planning Board that “not only does the proposed structure not fit in this neighborhood for a variety of reasons; I believe there is deceptiveness in the proposal itself, making the whole project even more troubling and potentially more damaging.” For example, he said, “the usage claims — by denying this is a museum or gallery, with a defensive claim that the excessive square footage is for storage — should trigger immediate rejection because this is a residential neighborhood of single-family homes, not a self- storage site or industrial park.” He argued that “the selfish desires of individual property owners who have blatant disregard for their neighbors are in no need of zoning law protection; the neighborhood is what needs protection,” an area he described as “heavily wooded, scenic, rustic, quiet, lightly traveled [and] unspoiled.”

Under the town’s new zoning code, adopted last year, site plans for large structures, such as the one the Spanus propose, come under the scrutiny of the town Planning Board. Under the old zoning, no such review would have been demanded. Hoff speculated that the drafters of the revised zoning probably “never envisioned that someone would actually propose a 20,000-square foot structure in a neighborhood like this and try to call it a single-family residence. So what may need adjusting here, in addition to this proposal, is the zoning itself.” He recommended that the zoning be revised to place limits on size, to ensure consistency with neighboring structures, and said currently the largest home on Avery Road is the one, at 8,473 square feet, also recently built on the Spanu property. Other big Avery Road homes are 5,134 square feet and 7,228 square feet, he said – all expansive but much smaller than what the Spanus now seek. 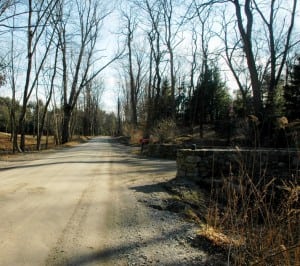 Another neighbor, Sam Braunstein, who noted that she had never before spoken at a public hearing “and am sorry to have to do it,” likened the Spanu project to a large car wash with bedrooms. “I feel this is not a residence,” she said. “It’d be a massive, glowing structure. I request the board not delay but reject the application.”

John Benjamin, whose home is adjacent to 245 Avery Road, noted that in the 18 years the Spanus had lived there, “I’ve never met my neighbors. And I guess that’s kind of indicative of where we are today.” No matter how much citizens or the Planning Board may try, “you can’t legislate neighborliness,” Benjamin said. He objected to Watson’s comment about rumors and chatter. “To call that chatter is B.S. This is a real, serious concern,” he added, one that raises a key question: “When is a house not a house? When is a residence not a residence?”

Others who spoke questioned whether the building could be adequately screened by trees; how much disruption the nearly two years of construction would bring to their narrow, partly-dirt road; and whether the safety of those who walk along the road would be compromised.

In a letter from Chief Rodney Tudor, the Garrison fire company expressed concerns about accessibility and maneuvering of fire trucks in an emergency. Watson said that those issues were being addressed.

Nancy Spanu tried to reassure the critics in the room. “We feel the same way as the rest of the neighbors,” she told them. “We like the same things you like … the quiet, the peace. We’ve tried and will continue to try to allay any concerns anybody has. We love the community up here. We have the same values.”

The Planning Board held the public hearing open, to be continued at its March meeting. Chairman Mike Leonard observed that many of those in attendance had written to the Planning Board and that “all of your letters are read,” with the points raised considered carefully before the board acts. “This for us is a listening process,” he said of the hearing system. “It’s not for [reaching] any conclusions.” 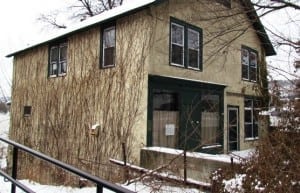 The board also continued its review of the renovation of the former Guinan’s pub at the Garrison waterfront to create a new 47-seat restaurant and small shop, with two apartments as well. Again serving as an applicants’ representative, Watson said that “the building is not changing very much,” though subsequent comment from the floor suggested considerable interest in changing the exterior stucco to clapboard in keeping with the original siding.

Andrew Chmar, executive director of the Hudson Highlands Land Trust, told the board that “I think there’d be widespread community support” for restoration of the clapboard, instead of replacing the existing stucco with more stucco. State historic preservation officials had pushed for the stucco a few years ago, but perhaps could be convinced otherwise now, he and other speakers suggested. “I’d be in favor of having clapboard,” said Chip Allemann, the manager of the Highlands Country Club, whose Tavern restaurant will move to the Garrison’s Landing spot.

Watson mentioned another change definitely planned – a new, septic and treatment system for dealing with waste-water from the building. When Guinan’s Pub operated there, the so-called sewage system “was simply a pipe that went into the river,” with the discharge untreated, he said.

Garrison resident Jamie Copeland told the board that “this was a location the community enjoyed for years and to have it vacant” for more than four years has been disconcerting. “I’d encourage the board to be generous in this application” and help move the project along, he said.

A third public hearing, on the lot-line adjustment jointly sought by Hudson Valley 2009, formed by Roger Ailes; Viewsave LLC; and Gerald Morris, drew little interest. Viewsave was created by Ailes and his neighbor Morris. A Viewsave parcel will be divvied up between them, essentially “eliminating a lot and attaching it to existing lots,” Watson explained.

Before the meeting ended, the Planning Board:

2 thoughts on “Neighbors Object to Mega-Structure for Art Collection”