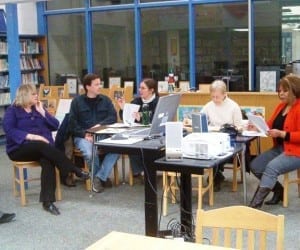 The Garrison Board of Education (GUFS) held its first 2012-13 budget workshop on Feb. 15. The workshops, now in their third year, began on the heels of a fractious two-year-long contract negotiation with the Garrison Teachers Union, and elicited a great deal of community participation. The first year’s series of workshops (with 15-20 participants each) were often contentious and acrimonious, but resulted in a year-to-year tax levy increase of only 0.12 percent. Based upon attendance at last Wednesday’s meeting, the workshop system may be a victim of its own success, as evidenced by attendance by only five residents. (Of those, only one pair of parents have children enrolled at GUFS.) Though less formal in structure, the smaller size group allowed for a more collegial setting with residents, school administrators and board members sitting, literally, at the same table.

Superintendent Gloria Colucci began with an overview of an “instructional program” that reflects recent board goals, and includes professional development (the Race to the Top and Annual Professional Performance Reviews (APPR)), small class size, individualized learning, accelerated science (in the middle school), continued foreign language study (for grades 3-8), the summer academy and upkeep of buildings and grounds. All these efforts have a cost attached and the “budget is the skeleton for the instructional plan,” said Colucci. The district will receive a $7,000 state reimbursement for the Race to the Top, but the APPR is an unfunded mandate. [See recent Philipstown.info article: New Teacher Evaluation System for Haldane]

In the months leading up to the budget workshop, Colucci and district Business Manager Susan Huetter have been working to prepare a “preliminary budget plan” based upon known and foreseeable revenue, expenses and escalation, which Colucci described as “a flavor of what’s been going on.” The result of their efforts is a $9, 585,028 preliminary budget, which becomes the starting point for budget workshop discussions.

Unfunded state mandates have been a financial burden for school districts, state-wide. As an example, Colucci told the group that their district is mandated to conduct 3-4 audits annually at an annual cost of $30,000. These and other mandates impose significant expenses on the GUFS budget. “If we didn’t have some of these mandates,” Colucci said, “I’m sure [the reductions required by the tax cap] would not be there.”

A historic source of revenue for school districts has been state aid, which has been steadily reduced over recent years: a trend that is likely to continue. Interest income has been a significant source of revenue in the past, for GUFS, but the economic climate of the past two years has reduced interest rates and the income the district derives from it.

The recently imposed tax cap requires school districts to follow an 8-step process to determine its individual tax levy limit (which may be less or more than 2 percent.) [See the recent Philipstown.info article School Tax Cut FAQs for a more detailed explanation.] 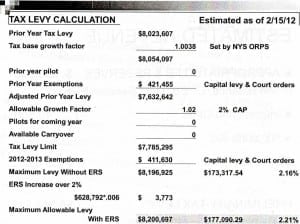 The required calculations allow GUFS a 2012-13 tax levy limit of $177,090 (2.21 percent) but the increased cost of mandates is $290,825 leaving a gap of $113, 697, which will have to be made up in budget reductions. Asked whether “this is doable”, Colucci replied, “We have no choice.” The tax cap legislation does allow districts to exceed their tax levy limit if the budget is approved by a super-majority of 60 percent of voters. Neither Colucci, Huetter, nor any of the board members present gave any indication that this approach might be adopted.

At this point, Colucci opened up the floor for discussion of the budget, with special regard for the reductions that may be forced upon the district by the tax cap. Colucci framed the discussion by asking attendees to address these three questions:

The consensus of opinion, in response to the first question, was that music, art and sports should be maintained. Suggestions for the second question included elimination of foreign language for elementary grades, review of transportation routes (with an eye toward possible consolidation of bus runs) and reduced staffing for elementary grades (as enrollment is projected to drop for incoming classes.) Implied by proposed staffing reductions, but not discussed, was the possibility of teacher concessions in the upcoming contract negotiations.

There were a number of suggestions about revenue sources, but none (individually or in the aggregate) would appear to make a significant contribution. A relatively large source of additional revenue is derived from grants, although these funds are usually targeted for supplementary uses. Accepting tuition-paying students was suggested but board policy precludes it. Advertising on school buses is prohibited by the state. Possible revenues from the school store and possible book sales were acknowledged as minimal. Two suggestions, with undefined possible benefits were to rent the gym and library to outside groups, and to use technology to effect cost savings.

Two more budget workshops have been scheduled for March 14 and 24, with another at a yet-to-be-determined date.
Photos by M.Mell