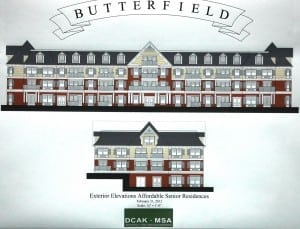 Concerns about parking, “walkability,” design, and consistency with the village Comprehensive Plan dominated a Cold Spring Planning Board session on the proposed Butterfield Hospital redevelopment project Tuesday night (Feb. 21). In nearly three hours of back-and-forth with Paul Guillaro of Butterfield Realty LLC, owner of the property, and his staff, the five Planning Board members also raised issues of adequate water and sewer service and water pressure. Guillaro plans a complex of affordable housing for senior citizens; more upscale condominiums, also for retiree-age residents; and an intergovernmental building for county, town and village offices. The government facility also could include the post office, whose lease in the Foodtown Plaza across the street expires this August.

One of a series of meetings being held as the review process  continues,  the Tuesday session drew about 15 members of the public, though the number dwindled as the evening wore on. The board did not entertain any questions from the floor. Much of the discussion focused on parking and related issues, though the Planning Board’s two outside consultants, who joined the board around the table, took different approaches. Ted Fink of GreenPlan, who assisted the village with preparation of its Comprehensive Plan and whom the Village Board hired to advise on the Butterfield activity, questioned the emphasis on parking and its apparent inconsistency with the Comprehensive Plan, adopted Jan. 10. In contrast, the Planning Board’s long-time engineering expert, Rob Cameron, criticized the Butterfield scheme for not providing enough parking.

“Perhaps the most important point is going to be ensuring compliance with the Comprehensive Plan,” Fink said. He noted that Guillaro wants to construct a Planned Unit Development, or PUD, which would require a zoning change. However, Fink said, a PUD must be consistent with a municipality’s Comprehensive Plan. Cold Spring’s “Comp Plan” calls for “a pedestrian-friendly community” and having growth be compatible with existing village character, he said. Under Guillaro’s current scheme, Fink said, “you’ve got a wall of parking that is going to face the community on 9D,” a situation at odds with “walkability.” He suggested putting parking behind the buildings and more reliance on parking on the street along Route 9D-Chestnut Street to “make this more of a pedestrian-friendly area.” 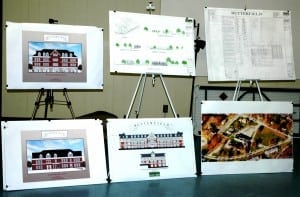 Project drawings as of Feb. 21, with the municipal building at left and senior housing building, lower center, and, on lower right, an aerial photo of the existing site

Reading from a memo he wrote, Cameron stated that the senior housing area would offer one parking place per unit, which he deems inadequate. He also said that too few parking spaces are available at the Lahey Pavilion medical offices now and that Guillaro’s plan depends in part on having some of the parking spaces for the inter-governmental municipal building on an adjacent property. Guillaro has proposed using the side lawn of the Grove, the historic but derelict village-owned house near the Lahey Pavilion, for parking. Guillaro said Tuesday that if he cannot carve out enough parking spaces at Butterfield, he would be forced to reduce the size of the municipal building. He likewise expressed doubts about locating parking behind the buildings and moving the municipal building’s façade closer to the street. “I don’t know if we’re going to make the post office work” in that configuration, he said.

The question of keeping the housing areas as a private enclave with a cul-de-sac but few or no connecting paths also came up. “I don’t see it as very walkable” or in keeping with the Comp Plan, observed Dick Weissbrod, a Planning Board member.

Weissbrod and fellow Planning Board Member Placito “Parge” Sgro also questioned the architecture of the proposed buildings. Renderings show a Georgian-Colonial American style, reminiscent of  18th-century Williamsburg, Va. “If I saw this large building and someone asked me if it reminded me of Cold Spring, I’d have to say ‘no,’” Weissbrod said, referring to the planned senior housing unit. Sgro termed the buildings well-planned but with the individual housing units much too similar. “It’s out of character with the village,” he said. “I’d like to see more diversity.” As for the proposed municipal building, “I think it’s more of an eye-sore, really,” than anything else, he said. He also seconded Fink’s concerns about minimizing the intrusiveness of the parking.

Planning Board Member Joe Immorlica wondered about the ability of the village water and sewer system to serve the complex in the future. Adequate future capacity should be ensured now, so that village taxpayers in years ahead do not end up paying for extensive upgrades, he said. Water pressure is another infrastructure issue, added Sgro, who said that a previous building on the site of the Lahey Pavilion burned down due to lack of water pressure for fighting fires.

Planning Board Chairman Joe Barbaro told Guillaro that the U.S. Postal Service wants to ascertain Guillaro’s interest in accommodating the post office at Butterfield. Guillaro responded that earlier on the 21st he had talked to the U.S.P.S. representative, who “wants a commitment on when I’ll be able to deliver the building. He needs a home.” At Barbaro’s request, Guillaro agreed to write to the U.S.P.S. firming up his intention to house the post office if the U.S.P.S. so desires.

Before the meeting ended, Guillaro and his architectural team agreed to prepare new drawings, with changes to deal with the various issues raised, before the Planning Board’s workshop on the project on March 20.

The Cold Spring Village Board scheduled a session with the Planning Board to go over Butterfield-related questions this coming Tuesday, Feb. 28, at 7:30 p.m. at the Village Hall, 85 Main St.
Photos by L.S.Armstrong

2 thoughts on “Parking and Design Dominate Planning Board Butterfield Session”