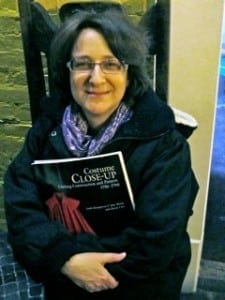 Although sewing is frequently a skill and talent handed down from generation to generation, sometimes the at-home learning opportunities aren’t there. With the popularity of television shows like Project Runway there’s a market for those who want to design and create their own garments. That’s why sewing classes have a renewed popularity nowadays. From the basics of hemming to conquering the fear of sewing machines, and working with patterns, there is no shortage of instruction available. The Needle Arts Guild of Historic Hudson Valley is one such instructor, offering a series of six-week sessions addressing the standard skills and techniques.  The Guild, in the form of its founder, Mary Ann Kronk, has also developed some unique sub-specialties, offering classes in the more arcane fields of historic apparel, from a variety of eras, including Regency and the American Revolutionary period. Some of the creations are then worn by re-enactors and museum docents working at historic sites.

Based in Beacon, Kronk came from “a family of sewers.” Both her mother and grandmother sewed and hand-embroidered, and when her mother died, she left all of her sewing materials: fabrics, patterns, kits, to her daughter, who then started sewing more frequently. After plateauing at a level of expertise, she sought out advanced classes, and couldn’t find anything local and affordable. This sparked an idea, and having moved up from New York City (where she worked as an accountant) with her family, including three young boys, she decided to take a chance and starting small, began offering sewing classes out of her home. She harbored a dream, which she still has, of opening a small store on (Beacon’s) Main Street, but by publicizing her classes online she saw that she was better able to “build a customer base online.”  The store is still a goal, but, especially considering her background as an accountant, she knows how easily small businesses can go under. 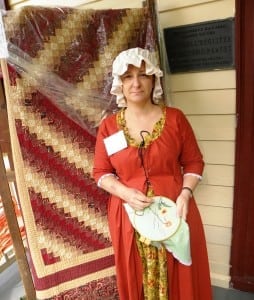 Kronk with her designsquilt, costume, needlepoint

With a steady stream of students, the more unusual offerings of historic costume-making and retro fashion stemmed once again from Kronk’s own interests.  A keen researcher, she had crafted historic apparel for the docents at various historic Hudson sites, and she sensed an enthusiasm from others. The demand in this region is, of course, mainly Revolutionary era, but Kronk also teaches and sews gowns and apparel from the Regency area, and is also currently participating as a test-sewer for the Vintage Pattern Lending Library 1912 Titanic Sewing Project  working with patterns from 100 years ago, under challenging conditions, as there were few instructions and markings and little construction and cutting information given out at that time. The test-sewers are providing notes and information during construction, and contributing to a digital archive of the results.

Fashion as a social history of a time and place is very much true of the Revolutionary era, says Kronk, noting that “In the days of the early colonies and Revolutionary times, fashion was so important that even housemaids would go out dressed nicely; it was very embarrassing to go out not dressed in a certain manner, with layers of underpinnings and corsets for the women. Fabric was so rare and precious in the early colonies that the bed was often placed in the main area of the house, the bed linens serving as a status symbol. … It was considered very unladylike to lift arms or bend down.  But, as fancy as it was, they only had one or two outfits, which they kept reusing. Most of the styles of dresses were the same: plain, and then decorated with fabrics and frills.  They’d mend, adjust and keep them for years, and were inherited from generation to generation.” According to Kronk, Revolutionary era garb was fashioned in a very different way from today, “In those days dresses were draped directly on the wearer, so that each garment was very individualized.”  Out of necessity and the practicality of the period, unconventional things were born: such as leaving extra seam allowance for pregnancies.  The war itself brought a halt to the shipping of fabric from Europe, so the women had to re-learn spinning, and were also introduced to textiles from other parts of the world. 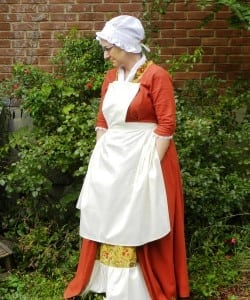 Kronk in her period costume design

The Civil War again made textiles scarce, and there were not enough fabrics or quilts for the army.  Kronk says “when towns were sacked, they destroyed sewing machines, and once again the spinning wheels came out, and what was produced then was often more ‘rough and ready.’  The Industrial Revolution changed everything, according to Kronk, as it became unpopular to make one’s own clothes as factory-made clothing became “the rage — a status symbol” and maids began to do the mending.

With 150 years or so of factory sewing behind us, basic sewing skills have inevitably  died out, and that’s where Kronk’s straight up sewing classes fill the void, “People are afraid of the very basics — handling a needle and thread. But after they’re taught, they quickly get used to it — it’s quite intuitive. Once they learn the basics, we work on embellishments. It’s a very creative thing, a good means of expression.”  Offshoots of the basic classes for this spring include a Retro mother/daughter dress class, inspired by the classic A-line shapes of the 60s. 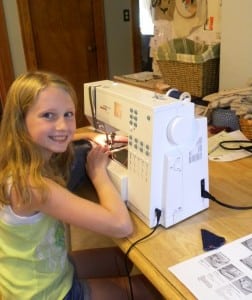 To school a new generation in sewing, Kronk will be offering a summer sewing camp for the second year, this July and August. Three different one-week sessions will introduce children and teenagers to basic techniques, including the operation of a sewing machine, and each participant will create a design of their choice, and, if they wish, they can show their work in a public “fashion show” at the conclusion. The camp is open to both genders, but yes, thus far the campers have all been girls. That is except for Kronk’s sons, one of whom “got into making little things like tote bags for the books he has to keep outside of his backpack during the school day.  He made one and called it his “freakin’ awesome bag!”

Kronk also offers quilting and hand embroidery workshops, either as a series of classes, or sometimes at special one-day events at historic sites and libraries. In addition to all the classes, she also creates costumes on request, and has a whole secondary line in upholstery, slipcover and home décor services. Just by posting an image of a slipcover she made for a Pottery Barn chair on her blog, Kronk has consistently received a couple of orders each week from across the country for similar items. She also re-makes nurseries into children’s rooms. She enjoys it all, “After so many years of accounting work, this is so creative, and I really enjoy teaching. It’s exciting to see people learning new things and creating things they want to make.”

For more information on the classes forming now, the summer sewing camp, the historic costumes and more, visit Mary Ann Kronk’s blog or give her a call at 845-549-3323.
Photos courtesy of Mary Ann Kronk, except as noted