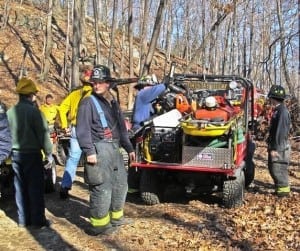 Continental Village and Garrison firefighters worked with firefighters from other jurisdictions in extinguishing a brush fire at Bear Mountain Bridge Road near the Westchester-Putnam line, last Wednesday and Thursday. The Continental Village Fire Department got involved around 11 p.m. Feb. 22 when it received a call to assist with the blaze, which was spreading close to the road. Responding with one engine and one tanker, they put out the burning areas that they could reach from the roadway with the deck gun and worked for about an hour.

About 8 o’clock the following morning, the Continental Village department returned to the area, joined by the Garrison Volunteer Fire Company, the Montrose Volunteer Fire Department, and New York State Forest Rangers. The groups assembled at Camp Smith and used all-terrain vehicles to reach the fire, about two miles away. According to the Continental Village Fire Department, once the firefighters arrived on the scene, they discovered that the fire had not jumped the fire breaks made the day before and had mostly burned itself out. They then “hit hot spots, until they deemed the fire to be out,” the department said. The site was left in the control of the state forest rangers, “who were going to stay on the scene and patrol the fire perimeter for the rest of the day to make sure that the fire did not pop back up,” CVFD officials added. They said all their units literally   “were out of the woods” by about 2 p.m. Thursday.
Photo courtesy of CVFD