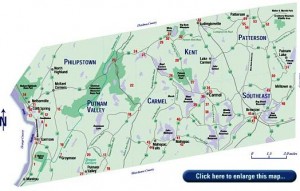 Following the resignation of Putnam County’s long-time county tourism director and reports that former New York gubernatorial first lady Libby Pataki had been quietly tapped for the post, the county last week issued a terse public announcement of the vacancy. The possible catch: The notice was published Feb. 22 and the deadline for applicants is Feb. 29, only a week later.

Appearing as the last of a string of formal legal notices in The Putnam County News & Recorder newspaper, the announcement simply states, verbatim:

The announcement did not appear in the Putnam County Times issue of Feb. 22, although several other public notices from Putnam County did run in that paper. Publication of the notice came after Philipstown.info reported on possible plans by County Executive MaryEllen Odell to move the tourism office, formally known as the Visitors Bureau, to Cold Spring, with Ms. Pataki as its new director. [See: County Tourism Office Could Relocate to Cold Spring.] The story raised questions about the appointment process and whether the vacancy would be advertised to allow a broader pool of applicants to come forward.