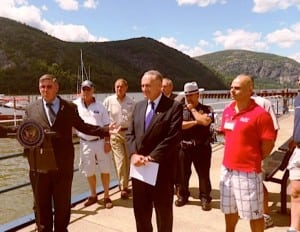 The most important thing Putnam County Sheriff County Donald B. Smith wants his fellow citizens to know is that the county is one of the safest, indeed the safest, in all of New York State. According to the state’s Division of Criminal Justice annual reporting statistics, Putnam held the No. 1 designation at the end of 2010.

Smith said the stats for 2011 were not yet available but he expressed confidence his jurisdiction would prove to be near, if not at, the top. Smith doesn’t so much take credit for making Putnam the safest county as he extols the vigilant work of his department to keep it that way. He also readily shares credit with federal, state and local town and village law enforcement departments as his partners in the effort.  “All the police work together well. Because no one cares about claiming credit a lot of good work gets done,” said Smith.   [Click for video]

“Some of the best schools in New York State, churches, synagogues, service organizations (Lion’s Elks, Rotary for example), and incredible fire companies,” are among the numerous community advantages Smith also eagerly acknowledged Putnam possesses. He stressed that he and his officers play personal roles as citizens in most of the organizations and local institutions, adding to the interconnectedness of his department in the life of the county.  And just as important to Smith, “Putnam County has a low tolerance for pain; people here don’t walk by things they might in New York City.” 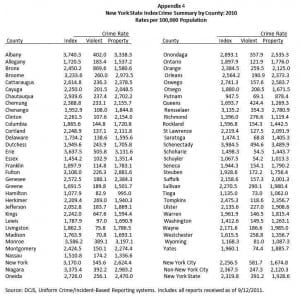 The sheriff sees Putnam as an anomaly within a region with greater crime threats. “We are 50 miles from New York City on the Hudson River; we have two train lines out of New York; we have interstate highways and state roads running through the county, connecting us not only with the City and Westchester but with crime emanating particularly from Dutchess, Orange and Rockland counties.

Right now we’re concerned about the 9 and 9D corridor,” said Smith referring to the connections to the more urban centers of Peekskill, Beacon, Poughkeepsie and Newburgh.

Seated in a small conference room at his headquarters in Carmel, Smith, as befits a former U.S. Army brigadier general, began an interview with Philipstown.info with a forceful, determined presentation regarding the law enforcement department he has headed since his first election in 2001. Willing to be interrupted and patient with questions, Smith nonetheless quickly returned to his outlined agenda, eager to demonstrate that he, his chiefs and deputies are about much more than patrol cars, investigations and arrests.

Throughout his interview Smith reinforced the emphasis he placed on the values he expects his department to live everyday in serving the people of the county. “Culture is important in any organization,” he said listing concepts such as service, integrity, courage (physical and moral) and respect as guiding principles. “We are about mission first while being always mindful of the taxes people pay,” said Smith.

“The mission … is to preserve the rights of citizens in the county through the prevention of crime, protection of life and property and the maintenance of order. The department enhances the quality of life throughout the county through education and awareness programs that help empower the people in the areas of security,” quoted Smith from a printed version of his mission statement. “Education and awareness are critical to preventing crime. That’s why [we] emphasize working with two groups, senior citizens (and people with disabilities) and young people,” said Smith.  He explained that these groups accounted for the major share of criminal and harmful activity, one as vulnerable victims, the other a source for potential mayhem.

“The greatest danger in Putnam County is automotive. Teenagers are seven percent of the driving-age population of the county but are responsible for 18 percent of the traffic accidents,” said Smith. Inexperience, a propensity for risk taking, alcohol and drug use are among factors he cited for the problem. At the heart of the sheriff’s efforts to influence teen awareness and prevent more incidents is a county initiative deploying specially trained school resource officers in participating schools. Deputies assigned can provide security, promote safety initiatives, help with issues such as bullying, and “be a role model so law enforcement is seen in a positive light,” according to Smith. The Haldane School District did participate at one time but cancelled out of financial considerations—schools must fund 50 percent of the cost.

Recently the sheriff reported a school resource officer in Brewster High School saved a student’s life when he used his emergency response training and the oxygen in his car for resuscitation.

Smith also recommended concerned parents register children with Operation Safe Child, a joint state government and N.Y.S. Sheriff’s Association program. Young people can obtain special ID cards that store personal information in an Albany database, which can be readily accessed by law enforcement in case of an emergency, such as a lost child on a vacation. “Lost cards don’t jeopardize the information,” said Smith.

Senior citizen and people-with-disability groups receive special attention from the Sheriff’s Department, with deputies frequently presenting information on security checks and the latest variety of scam artist to promote crime awareness and prevention. In addition there is the R-U OK? Program, which calls people living alone once or twice a day to check. “If no answer, we check with neighbor or dispatch a patrol car,” said Smith.  Seniors can also obtain from the Sheriff’s Office an easily recognizable refrigerator card first responders would see in an emergency containing medical data and medicines taken. Smith worries about the telephone as a scam weapon with older citizens receiving urgent calls about a granddaughter needing funds to get home from Europe or a prize won that requires a bank account number to be processed. “If it sounds too good to be true, it is,” said Smith.

Business people also benefit from the sheriff’s proactive efforts. According to Chief Gerald Schramek, who sat in on the interview as well, over 200 merchants receive real time e-mail blasts on the latest information regarding burglaries, bad check passing and other forms of merchant victimization. The system is interactive with merchants sharing information and perspective as well. “We really believe in the education part of the mission,” said Schramek.

Philipstown, although only an outpost compared to the county population center on the eastern side, nevertheless retains an important place in Sheriff Smith’s mind if only because it affords fine views of West Point, his alma mater, he wryly suggested. More seriously he said his deputies work closely with Cold Spring Police Officer-in-Charge George Kane and his patrol force.  “We pretty much do all their felony investigations so they can focus on community policing, said Smith.

As a previous Philipstown.info article noted,  Smith plans to open a substation on Main Street in Nelsonville to handle more police work such as witness interviews and violation-processing locally. The new facility will open sometime in the spring.

Smith also pointed out his department’s duties don’t end at the western shoreline of the county. A federal government grant has added a new boat to his river patrol division, which he stressed is “not out on the river to harass boaters but to help them and respond to emergencies.”