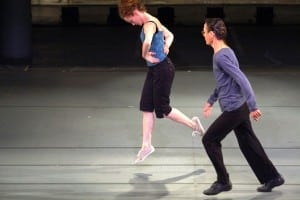 In recent years Dia Beacon has been mounting retrospective seasons of something other than just work in the visual arts. Modern and contemporary dance, presented in the spectacular museum space — a former printing plant built in 1929 by Nabisco — has served as both a counterpoint and mirror to their installed art works collection. Dia’s programming, which consists of both retrospectives and new commissions, reflects their stated “commitment to presenting experimental performance and dance,” in works aligned with their 1960s through the present art collection. They have, at times, commissioned new pieces, and also re-staged “seminal historic works.”

This year, the work of avant-garde choreographer turned filmmaker Yvonne Rainer is being featured in a “year-long residency,” with three unique programs presented over three weekends dotted over the course of the 2011/12 season. The second week-end of performances took place on Feb. 25 and 26; the final performance takes place on May 13.  Works include some of her earliest — dating to the 1960s — and most iconic, paired with three compositions created within the last 12 years, after the conclusion of what turned out to be a 30-year hiatus from dance. Prior seasons were comprised of works by such dance innovators as the Merce Cunningham Dance Company (from 2007 through 2009) and the Trisha Brown Dance Company, which participated in a similar three-part residency during 2009/10. 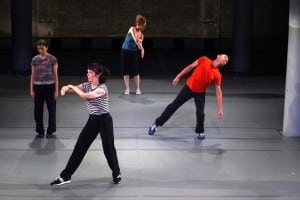 Dia has a history of collaborations with dancers and dance companies, not only in performance but through the provision of low cost dance and rehearsal space. From 1985 to 1996, Dia hosted a dance program in its former Soho building that focused on providing free and low-cost rehearsal and performance space for dance companies and individuals. That program included “The Salon Project,” an annual event at which twelve choreographers working in the building were selected to present their work publicly. Dia also commissioned performances at its former Chelsea building.

Yvonne Rainer, born in 1934, trained at the Martha Graham Dance School in the late 1950s, and, in 1960, enrolled in a year-long dance composition workshop led by avant-garde composer Robert Dunn and based upon John Cage’s teachings, at the Merce Cunningham Dance Studios. Rainer’s earliest works were conceived there, and soon thereafter she co-founded the Judson Dance Theater, which formed the epicenter of the experimental dance world in New York from the early-to mid-1960s. Program notes written by Kelly Kivland, Curatorial Associate at Dia, read, “this presentation … simultaneously celebrates an artist revered for her impact on dance and illuminates her influence on visual art practice beyond the 1960s.  With each program of selected works, we are given the opportunity to revisit the historical precedence of Yvonne Rainer’s early choreographic work, as well as consider the contemporary aspects of her career in dance.”  Calling Rainer’s “undeniable, wistful rebellion” central to her choreographic practice, Kivland describes Rainer’s early work as “actively challenging the expressive movement conventions and narrative structure popularized by the modern-dance establishment.” 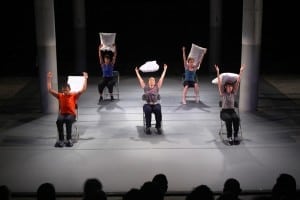 By the late 60s, Rainer had begun to incorporate multi-media, including projected images, then films, which she herself shot, into her dance performances, and by the mid-70s she had shifted to film-making, completing seven experimental features, and giving up dance entirely. In 1997, retrospectives of Rainer’s films were held at the San Francisco Museum of Modern Art and the Film Society of Lincoln Center in New York City.  Much of her choreography was considered “lost” during the long hiatus, but has now been resurrected. Rainer’s return to dance began with a 2000 commission from the Baryshnikov Dance Foundation for the White Oak Dance Project.

Since re-entering the dance world, Rainer has formed a small company, colloquially known as the Raindears, from whom this weekend’s dancers, Pat Catterson, Emily Coates, Patricia Hoffbauer and Keith Sabado, were drawn. Rainer’s focus on the “nuances of task-oriented movement” and use of walking, skipping, falling, running straightforward movements was quite evident in last weekend’s program. Performed on mats located in the middle of a huge, multi-columned lower level gallery space, the program consisted of three pieces. The first, a solo, Three Seascapes, (1961), performed to a Rachmaninoff Piano Concerto, featured a woman, clothed initially in a navy raincoat, then in a simple black leotard and pants, who entered and alternated between a pacing kind of running along the exterior lines of a squared off space, at times turning about face, and then sinking into a curled, fetal position, before rising again and repeating the actions, but never in any discernable pattern. At times she resembled a puppet, or a construction of tin, being oiled to life. Her demeanor and expressions evoked changing miens, from coy to boyish to seductive. In the last section of the piece her interaction with a white, bridal or perhaps tutu-appearing fabric she threw down included the vocalization of screams, seemingly in reaction to what was being represented.

The second selection, Three Satie Spoons, (1962), was performed by the three female dancers to Trois Gymnopedies by Erik Satie and was filled with repetitive movements: index fingers pointing, jumping kicks, stretches, turns, balances, posing, attempts to pull corners of the mouth into a smile, many of the actions evoking a dancer’s warm-ups.

The last piece, Spiraling Down, (2011), was a compendium of spoken word, relating but not limited to the journey from non-athlete to marathon runner, with four dancers often assisting each other in various groupings and a variety of moods and attitudes on display including, from stream of consciousness note-taking by this viewer: ‘tentative; getting out the kinks; showoff; preening; chased by monster; unaware; queenly waves; bravado, gleeful monster; uncertainty.’  The music was Ravel’s Bolero.

For more information on Dia and what is yet to come in the Yvonne Rainer retrospective, or to order tickets for the May performance, visit http://www.diaart.org/sites/main/beacon.