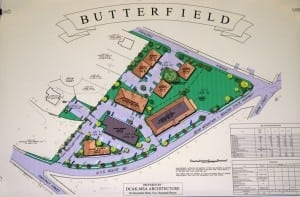 Reviewing differing drafts of a proposed zoning law, Cold Spring officials continued their scrutiny of the proposed Butterfield Hospital redevelopment last Tuesday (Feb. 28), when the Village Board of Trustees, Planning Board, and developer met in a lengthy session marked at times by three-way friction over procedures.  The property owner Butterfield Realty LLC, led by developer Paul Guillaro, seeks a zoning change to allow a Planned Unit Development (PUD) with affordable senior housing apartments, more upscale condominiums for retirement-aged residents, and a shared village-town-county building, with commercial space. Butterfield Realty’s plans call for subdividing the property into four lots, two containing the housing; a third with medical offices, including the existing Carolyn Lahey Pavilion; and the fourth with the municipal building and commercial-retail space, with possible room for the post office. Because the tract is currently zoned B-4, which provides for medical and health-care facilities as well as uses allowed under R-1 single family residential zoning, the village must rezone it by enacting a new code provision.

Despite the emphasis on senior housing in Butterfield Realty’s designs, the draft zoning law the firm prepared would allow housing for “per­sons of varying financial resources and varying ages” and among permitted uses lists “two-family and multi­ple dwellings.” In contrast, a draft PUD zoning provision written by Village Attorney Stephen Gaba would only al­low age-restricted housing, except for a single unit for a resident caretaker/administrator, and mandates that “no uses other than those specifically approved for the individual lots,” subsequently listed, “shall be permitted.”

Moreover, unlike the Gaba draft, the Butterfield Realty draft rezoning proposes “a land-use pattern which minimizes the cost of the provision of community facilities and utilities — water, sewer, fire service, schools and roads,” language that raises questions of whether the “minimized” costs of “community facilities and utilities” would be paid in part by village taxpayers.

Both the Butterfield Realty and Gaba draft laws grant the Planning Board discretion in making limited adjustments to the allowable building sizes and shapes, “balancing important concerns of the community’s health, safety and welfare, including consistency with the Village of Cold Spring Comprehensive Plan; economic development; harmony of uses with the immediate area; impacts upon quality of life for neighboring residential areas; and mitigation of any adverse environmental impacts.”

In a Feb. 27 analysis undertaken at the request of the Village Board, the Special Board for a Comprehensive Plan described elements of Butterfield Realty’s plans as incompatible with the Comprehensive Plan, adopted in January. For example, the analysis found that the proposed plans allow for a population density that “far exceeds” that found in residential neighborhoods now and that the units constructed “could be utilized for” assorted types of housing, including “one-family, two-family, and multi-family… Such a high-density of residential development is inconsistent with the existing character of the village and may result in adverse fiscal impacts to the tax base,” the Special Board wrote. Moreover, the analysis found, “the conceptual drawings for the Butterfield site attached to the PUD Petition [Guillaro’s rezoning request], with parking lots lining village roads, is oriented towards cars rather than pedestrians. A pedestrian-oriented streetscape with parking located behind buildings and sidewalks along the street should be required,” in keeping with provisions in the Comprehensive Plan.

Guillaro rejected that idea. In the Comprehensive Plan, “there are a couple of things I don’t agree with and I’m not going to comply with in my plan. I think you need to know that upfront,” he told the boards. Above all, “I can’t have the parking in the back” of the municipal building, he said. “That kills my whole concept” and the U.S. Postal Service also won’t accept post office parking behind the building, he said.

Mayor Seth Gallagher disagreed that the Special Board analysis could prove problematic. “Anything in that does not seem to be a roadblock” but something to resolve to the satisfaction of all parties, he said. 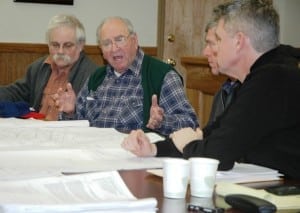 Questions of delays and infringements on Planning Board

Much of the discussion focused on questions of whether the village government is encumbering the process and delaying Guillaro, or, conversely, whether the developer and Village Board are forcing the Planning Board to act too swiftly or seeking to subvert its role. In December, the Village Board declared its intent to serve as the “lead agency” in regard to supervising the project and fulfilling obligations under state law, a stance formally adopted by vote on Feb. 14.

Guillaro’s attorney, Richard O’Rourke, suggested that the village has already taken too much time since Guillaro submitted the rezoning application in December. He likewise raised the specter of village violation of New York village law, the state laws governing villages. “We’re suggesting that you follow the way the village law lays it out, the way your code lays it out,” he said.  “We need to move forward. Whatever format you want to make it, that’s fine,” he said of the draft zoning law. “But let’s move with some alacrity and in accordance with the law.”

County Legislator Vincent Tamagna warned that if the village dawdles, the county could withdraw support and the whole project – including hopes for a civic-community center in the municipal building – could evaporate. “The work you’re doing is very important and really needs to be expedited, in a very cautious way, so it doesn’t violate your Comprehensive Plan,” Tamagna said. “But I don’t want to lose the opportunity for us to have the municipal center. If it looks like we’re not going to anywhere with this,” the county may withdraw its support. If the village does not move efficiently, “you’re going to lose all the partners that could very well be a part of this and possibly lose a development that could be very good for us in the future,” Tamagna said.

Gallagher assured him and Butterfield Realty that the project “is something this municipality itself supports;” along with the town and county. “We want this to happen. At the same time, we want to make sure we go through the process correctly: The Planning Board does its job and we abide by our Comprehensive Plan. There’s no envisioned delay,” the mayor said. “We’re going to get to our endgame, and that includes a municipal building and we’re going to try to get there as soon as possible.”

Planning Board member Dick Weissbrod objected to Guillaro that “you’re pushing us to get this done” and accused Gallagher and the Village Board of “just pushing down on things that don’t need to be pushed down on” and wanting to take over the entire process. On the Village Board, he said, “they just don’t care what we think” as a Planning Board. “Why? I have no idea – for political show, or something.”

“Things were done wrong here,” fellow Planning Board member Parge Sgro concurred, stating that the Village Board failed to inform the Planning Board adequately of its intentions and actions.

Trustee J. Ralph Falloon also expressed doubts about the Village Board’s participation and whether it was “taking work from the Planning Board. It’s not fair to them. Right now it looks like we’re leading and they’re following. We can’t be the lead agency without their input.” He also said that “instead of trying to make things go quicker it seems like we’re slowing things down by doing things over and over.”

The mayor disagreed, as did Gaba and Planner Ted Fink, hired to advise both boards. Because of Village Board responsibilities as lead agency, the process “has to be routed through you,” Fink told the mayor and trustees.

Gallagher said that the Planning Board had been informed early on of the Village Board’s involvement and that the joint meetings keep both boards in sync, “so you know what we know and we know what you know, at the same time. We’re not trying to rush anything,” he said.  “What we are trying to do is not spin our wheels, which has happened with applicants” before the Planning Board, “when something will take several years that probably should not. So I don’t want to take complete hands off and say ‘here, it’s yours to do as normally would be done.’” He described Gaba’s rezoning draft as “something to start with. And it’s to be filled in and changed” as necessary, with both boards looking closely at it in the next couple of weeks, he said.

“I know at times it might seem that the Planning Board and Village Board are at odds,” Planning Board Chairman Joe Barbaro added. “Really, we’re not. I think that this unusual situation, where we’re all meeting together, can be a workable solution to this most unusual application. I’m sure the mayor is on board with this and I like to think the Planning Board is on its way to being on board. Let’s try to make it happen.”

The joint board discussion ended with plans by members of both boards to tour the Butterfield site on March 3 to literally go over the same ground together. Guillaro promised to help by outlining the locations of the major buildings with stakes in advance.