Every budget ultimately consists of numbers on a page, but every new budget first begins with words. At the Feb. 28 Haldane Board of Education workshop, Superintendent Mark Villanti began his PowerPoint presentation on the 2012-13 budget process with the words: “Fighting the two-handed dragon.” He even named the dragon’s two heads – “Cappy and Gappy.” The names had a somewhat humorous ring to them at first, but there was nothing funny about the message he delivered to trustees and the audience.

The dragon head names stem from New York State’s decision to “cap” increases in the tax levy school boards can impose while at the same time reducing revenues to school districts through its “gap” elimination formula – part of the state’s strategy for dealing with its own serious and longstanding financial mess. While the tax cap poses enough of a challenge to school districts, Villanti said that that the gap elimination formula is, “…the more ferocious of the two.” With state revenue being cut, some costs unavoidably increasing, and their ability to tax residents being held in check, school boards across the state find themselves in a very tenuous position. “I have serious concerns about public education. If we stay on this [gap elimination formula] through 2015-16, every school district in New York State will be broke,” Villanti said.

Villanti has pointed out numerous times that the state’s 2 percent cap on the tax levy is a misnomer. The permissible tax levy increase actually varies from school district to school district. For Haldane the increase is currently capped at 3.36 percent. The district could propose a larger tax increase, however, to pass it would require a supermajority – a 60 percent approval – when it goes to voters in May. Villanti said that the supermajority rule means that “41 percent of the voters can control the outcome of school budgets,” a scenario he described as “undemocratic.” Should the proposed budget be defeated in May, it would result in a required zero percent increase in the tax levy – a situation that Villanti said would be “disastrous,” bringing about major cuts in education programs. 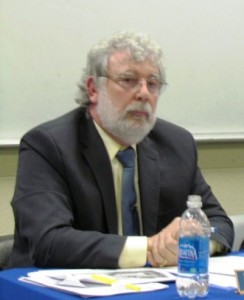 In an email to Philipstown.info Villanti said, “We have scaled down spending  [to stay] within the cap.”  Spending reductions total about $385,000 thus far, from such areas as: cleaners’ salaries, savings in salaries due to retiring teachers and teacher aides, special education tuition, computer services, and bus driver salaries.

The state revenue side of the budget is not pretty. Haldane’s website includes this statement from Villanti: “The gap elimination [formula] causes Haldane to lose at least $528,451 in New York State revenues for the second year in a row…and no one is talking about that.” At the workshop he said that the district could be looking at a deficit of more than $540,000 in 2013-14. Another contributing factor is the absence of federal funds the district received in recent years through the stimulus package and the jobs bill – programs which no longer exist.

That leaves the school board having to rely on its reserve funds and the yet-to-be determined fund balance going into next year. The Haldane district at least seems to be in a better position than some of its counterparts. “Other districts have ravaged their fund balances [already] – we have not done that,” Villanti said. The strategy he is recommending to trustees is to adopt “a wait and see” attitude by “applying reserves and fund balance for this year while we assess the impact the improved economy has on next year’s budget.” He listed increases in sales tax revenue in Putnam County and decreased unemployment nationwide as positive economic signs.

He did have some potentially good news. At a recent meeting he attended with senior state education officials, Villanti and other superintendents were told that $200 million in aid may be on its way back to school districts – although when and just how much of that total would benefit Haldane is not known. Villanti said that “practically speaking” the close-to-final budget will be ready by the end of March or the first school board meeting in April.

At the end of the meeting he recognized the less-than-joyous feel to last week’s workshop. “I understand the somber mood in this room,” he said. Budget discussions continue at the School Board meeting on March 6.
Photos by M.Turton