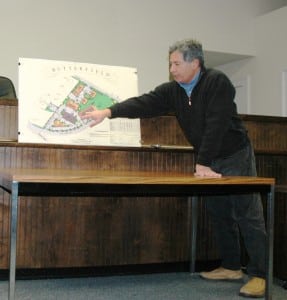 Developer Paul Guillaro shows the Town Board his plans for the Butterfield property.

With community interest in the proposed Butterfield redevelopment project growing, the Philipstown Town Board added its voices to the discussion Wednesday (Feb. 29), going over familiar ground but also raising new considerations, including the ramifications of an increased senior citizen population for ambulance services. Less than 24 hours after concluding a lengthy session of the Cold Spring Village and Planning boards, Paul Guillaro, of Butterfield LLC, the property owner, briefed Town Board members in a workshop at Town Hall. In a solo presentation (unlike the previous evening, when his attorney and other staff accompanied him), Guillaro also provided draft floor plans for the proposed municipal building, intended to contain village, town and Putnam County offices. The overall complex includes 50 units of affordable senior-citizen apartments, 36 upscale condominiums for 55-and-older residents, and commercial space, perhaps with room for a post office. To create room for the new structures, Guillaro also intends to demolish the old hospital, parts of which date from the 1920s.

His plans have drawn intense study by the Cold Spring village boards and Guillaro acknowledged that the designs he displayed may change, to some extent. “That’s a concept,” he said of the December 2011 design of the municipal building. “I don’t think it’s going to stay like that.” To the residential designs, too, “we’re going to have to make some modifications,” he said. Overall, he added, “the plan is still developing, but that’s basically what it’s going to look like.” 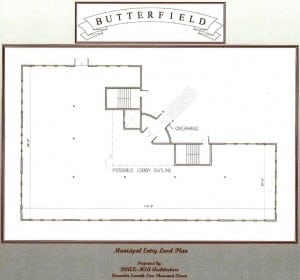 The issue of ambulance service rose when Councilor John Van Tassel, a firefighter and one of the Town Board members who looks into emergency service questions, predicted that the Butterfield development “will impact emergency services, without a doubt,” among them the Philipstown Volunteer Ambulance Corps. “I wouldn’t want to guess, but probably 50 percent of their calls are across street, to Chestnut Ridge,” an existing range of apartments for modest-income senior citizens, he said. “Now you’re doubling the elderly population, which is really going to impact Philipstown Ambulance. I don’t know if they’re prepared for that. I guess they’d have to address that.”

Councilor Nancy Montgomery, a professional in the hospitality-restaurant business, approached the question from another perspective. “I’m just wondering about the need for senior housing. Are you locked into that use?” she asked Guillaro. “I’m thinking, `what does the village need most?’ And what I see in my work is places for people to stay” when visiting the area for hiking or other purposes. She also asked about plans for a piece of the existing lawn, so far designated as retained open space. “Is that village green open to the public?” she wondered.

If it’s not, Supervisor Richard Shea put in, “I think there’s going to be a big uproar among the sleigh-riding community.” Families use the slopes on the site for sledding in winter, while children play on the currently expansive lawn in other seasons. Guillaro responded that the piece of lawn “was offered to the village. It’s up to them to decide.” 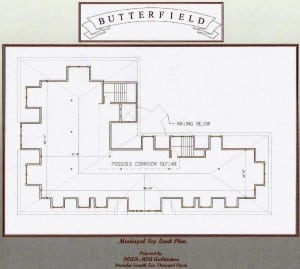 The developer also tied the green space to questions posed about a possible excess of paving, cars, and parking on the site and its effect upon the village goal of promoting pedestrian-friendly neighborhoods. “One of the big issues here that has to be taken into account is that we’re keeping the one acre open as this green,” he said. “If it wasn’t for that, I’m sure we could have a lot more green around the buildings and wherever else. If the [Cold Spring] board decides that, ‘you know what — we don’t need this green coming in here,’ that’s fine, too.”

As the meeting ended, Shea said he considered the project “an opportunity for things we need here,” especially a senior-citizen center and public meeting hall, something on his wish list for months. “I want to engage the public,” in the Butterfield debate, he said. “I’d like people to get involved, because when you look at this building,” the 1867 Town Hall, “you know something has to be done. So is it worth putting money into this building, or do we want to look at going into a fully functional, finished space?” The municipal building would also help the various government jurisdictions “really do some consolidation” of functions “and actually wind up potentially saving taxpayers money, and having better services,” he said. While he said he would like to see the construction get underway this year, Shea also noted the concerns about the historic nature of Cold Spring and well-being of its residents and expressed confidence in the village government’s ability to act wisely.  “I imagine their main concern is ‘what’s best for the village of Cold Spring?’ As it should be,” he said.
Photos by L.S.Armstrong

2 thoughts on “Developer Briefs Town Board about Butterfield Property”