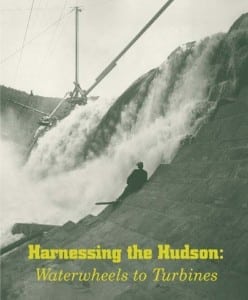 Images tell a dramatic story of the power of water

Beacon Institute explores the massive engineering efforts on the Hudson River in a new exhibit, Harnessing the Hudson, Waterwheels to Turbines, a photographic history of how people have harnessed the renewable energy of the Hudson River from early sawmills of the 18th century to the hydroelectric turbines of the early 1900s. The exhibit runs from March 10, 2012 through Oct. 7, 2012 at the Institute’s Gallery at 199 Main Street in Beacon; the exhibit opening coincides with Beacon’s Second Saturday.

This exhibit, on loan from the Chapman Historical Museum in Glens Falls, N.Y., contains a collection of archival photos with accompanying descriptive text that tells a dramatic story of the power of water, which inspired the early innovations that created turn-of-the-twentieth century renewable energy. Following the evolution of hydroelectric power, the exhibit begins with the simple waterwheel of the 18th century. The pictorial history highlights the notion that power harnessed from waterfalls could serve industry, initially sawmills, setting the stage for the industrial revolution of the 19th century. As inventors develop the technology to convert mechanical power into electricity in the late 1870s, pictures of waterfalls morph to hydroelectric dams and turbines, enabling the explosion of twentieth century industrial growth.

In 1903, the Spier Falls hydroelectric dam, located on the Hudson eight miles upstream from Glens Falls, began to produce electricity, a project that captivated the interest of people far and wide. They were familiar with water power, but electricity was a very new phenomenon at the beginning of the 20th century, and many people were not convinced of its potential. Little did they suspect how much it would change their lives.

The traveling exhibit features archival materials and artifacts principally from the Chapman’s Spier Falls collection but also from other regional archives. Of particular note are photographs provided by the Schenectady Museum and Science Center, which houses thousands of images that document the history of GE and the development of electricity.

The funding for the original Chapman Historical Museum exhibit was through a series of grants from Brookfield Renewable Power, The Leo Cox Beach Philanthropic Foundation, the Waldo T. Ross & Ruth S. Ross Charitable Trust Foundation, National Grid, the New York Council for the Humanities and general operating support from the New York State Council on the Arts, a state agency.